Walkin’ Along My Merry Way

Some people may think that walking from the airport to town is unusual, but walking was a job requirement of the Footloose Forester. Once you left the road to enter into the forest, walking was the only way to get around, so walking was a fixture in his thought processes. Not many people shared his viewpoint about walking, no wonder he was a lone wolf.

Over the years, the Footloose Forester learned that walking was good for the muscles and for the soul. Thus, hiking and camping became an ingrained part and parcel of his preferred vacations; and very often they were built into many forestry jobs. Even in cities, he preferred to walk when it was convenient and in doing so, saw things that he may have otherwise missed. He even learned a few things when he took the time to peer into store windows. As the doors to the memory banks open, he recalls some long hours walking the streets.

After a scheduled meeting at one of the government offices in Moscow, he decided to eschew the taxi and walk back to the hotel. It was over 3 hours later that he got in from the cold of a November day. But it was not as cold as that time in Berlin that he walked for at least two hours in -10°F. weather to go past the Brandenburg Gate on his way to Checkpoint Charlie. The Berlin Wall was still intact at that time and he hoped to absorb as much existential essence of history as he could of the Cold War ambiance.

Following the trails in the forests of the Northwest Frontier Provinces in Pakistan was not hiking for pleasure. The miles of foot trails were part of the framework that defined their forestry project areas. Although there were plenty of camel caravans in the rugged mountains to the south, there were few beasts of burden in the Northwest. Luggage and supplies were loaded into hard-edged trunks and strapped onto the backs of porters with ropes. The system seemed primitive--and it was--but modern outdoor gear had not yet been developed. Even bedding, known locally as bisters, was sometimes carried on peoples’ backs because we didn’t always know where we would be sleeping at the end of the workday.

One memorable walk from the airport to his destination with his suitcase in hand was in Viet Nam. It was at least three miles from the terminal building at Cam Ranh Bay to his anticipated bunking at the PA & E field office behind some large sand dunes. It was daylight and the sun was shining, but it was not hot. Since there were no taxis or company transports at the terminal, walking was a practical solution. A Navy lieutenant picked him up in a jeep just before he turned off the main road. More details about that episode can be found in that chronicle entitled “Holiday at Cam Ranh.”

About 3 hours wandering around Athens, Greece was par for a voluntary stroll when there was no agenda, except to eventually end up at the Acropolis. Under those circumstances of essentially being a sightseer in pleasant weather, the Footloose Forester stopped more than once for a beer or a snack at a street vendor’s kiosk. The point was, he got to see the sights but without a taxi meter clicking away or anybody urging him to move along.

One of the most unlikely walks from the airport to town took place in Bali. Instead of taking the bus that the Footloose Forester knew went into the main city of Denpasar, he chose to hoof it the three miles or so and take in the sights at his own pace. It was not so memorable until he passed through town on his way, hopefully, to a beach hotel and a relaxing unwinding on a sandy beach. He could see the outlines of a couple of tall, modern intercontinental hotels off in the distance, surrounded by coconut palm trees lining the beach. The road ran parallel to the beach and finally bent around to branch off to the hotels, left and right. He decided to cut through a rice field and head straight to a small village he could see between the road and the beach. What a serendipity that was! The village itself was sheltered by palm trees. 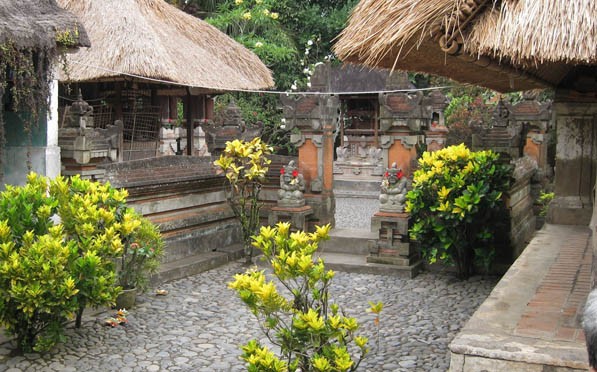 When he got past the outer ring of coconut palms, the first thing that attracted his attention was the sound of rice being threshed at the edge of the village square. Four young ladies, all wearing local sarongs and naked at the waist, were taking turns with their own long wooden prods and pounding the rice inside a scooped-out bole of a large coconut stump. As the rhythmic blows fell, the Footloose Forester knew that he was never again going to see such an old and customary tradition in a native village on Bali. All the girls were approximately the same age, and he got the impression that they were fulfilling a community function that designated certain age groups to perform certain chores. They did not look in his direction, even if they might have seen him watching them. Afterward, he went up close to the threshing vessel to ascertain its depth. He must have forgotten that he was on his way through a shortcut route to a beach hotel.

Other aspects of Balinese culture were evident in the small village. There were many vestiges of Hindu sculptures in the main square, a reminder that Hinduism was once very prominent in Indonesia. As we know, Indonesia has one of the largest Muslim populations in the world but Bali and its unique location as a remote island less than 800 miles from Australia, attracts many visitors because of its mixed cultural history.

Needless to say, the Footloose Forester sought out a small, native hotel on the beach that offered local color like a thatched roof and bamboo floors. You don’t have to make stuff up; all you have to do is go looking for color and adventure--and you will likely find it.