T is for Tanzania

Many people know that Mount Kilimanjaro is located in East Africa and that there is snow at its summit. At 19,341 feet above sea level, the top of Kilimanjaro is a sacred place to many of the tribes in East Africa. But in recent decades of global warming, sometimes there is very little snow, indeed. 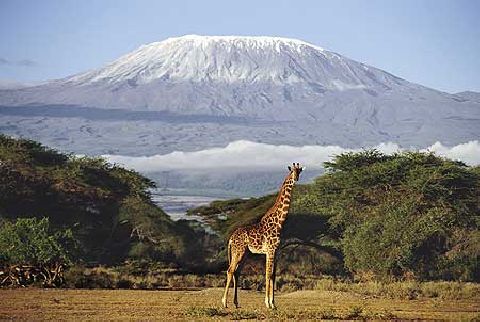 The year that the Footloose Forester reached the summit with seven others in his group from the American Embassy in Nairobi, there was almost no snow along the last five or six miles of trail and none at all at the monument marking the spot of the highest elevation. At least that was the case on that day in March 1994 when we visited. That is not to say that deep snow is not a problem at other times.  In the first photo below, ice may be an issue, as well.  The glacier shown is composed of old layered ice and snow, as well as fresh ice deposits.

In the two previous years and in the year following the Footloose Forester 1994 pilgrimage to Kilimanjaro, all of the embassy groups failed to reach the summit. They were turned back either because the deep snow was too difficult to traverse within a few days, or because a sudden snow storm made visibility impossible and climbing dangerous.  Two in our own group turned back before reaching the summit. 10 climbers the day before ascending Kilimanjaro*

As mountains go, Kilimanjaro is not a technical climb and thus pretty easy. It really is more of a physical ordeal involving strenuous hiking uphill, than a mountaineering challenge requiring special training. At one stage, our small group of adult men and two women encountered a hearty group of a dozen Japanese women, all in their seventies and older, who were coming down. We could tell these gals were rugged outdoor types, because most of them wore hiking shorts that showed heavily muscled calves. Since they were on the way down and our group was headed up, we didn’t know if they made it to the top. 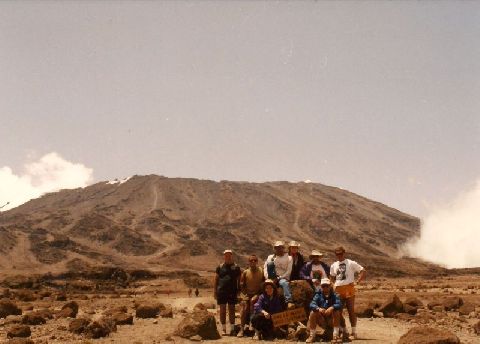 (The Footloose Forester is on the left)

As a destination of a real pilgrimage, the top of Kilimanjaro was the place where the Footloose Forester was observed kneeling at the Uhuru monument and was heard delivering the lines, “domine delexi decorem tuae, et locum habitationis gloria tuae.” Latin for “Oh, Lord, I love the beauty of your house and the place where your glory dwells”, it was straight out of the prayer book that Footloose Forester carried when he was in grammar school. As a certified wise guy, the Footloose Forester was also heard to say something like, “Upon completion of this sacred pilgrimage, I hereby devote the rest of my life to fast cars and faster women.” Readers, don’t take everything too literally, because everybody knows that the Footloose Forester was always angling for a good joke, even when they were months or years in the planning. Not everyday, however, that you get to deliver a few good lines in a place you had waited decades to visit.

On many days there is no snow to be seen on the summit of Kilimanjaro, but there are still three residual glaciers on top. In this age of virtual reality, you can fly around the summit of Kilimanjaro by piloting a flight simulator within the computer program Google Earth. Take off from Kilimanjaro Airport or go directly to the mountain at S 3° 03′ 54.71″ and E 37° 21′ 24.11″, to see how much snow was there on the day that the satellite photo was taken.

* Two of the climbers In the middle photo turned back before reaching the summit. One of them, the man with the white sweatshirt on the right in the second photo, was killed in an automobile accident in Nairobi, Kenya less than 10 days later.