As time passes, so also do some of the details of even favorite adventures.  The great fun trip to the Laikipia Plateau of Kenya in 1991 was one of them, and last night’s chat with old friend and African hand Andre DeGeorges eventually got around to the time when we camped out at a waterhole at the 30,000-acre ranch of Jasper Evans.  When we showed up at his ranch in the warmth of early spring on that safari so long ago, Jasper suggested that we would have a comfortable campsite if we went back down the road a mile or so and made camp near the waterhole in the woods.  It was completely surrounded by trees and would be private and quiet.

Andre put his Toyota 4 X 4 into gear and reversed course along the dirt road in the direction of Nairobi, more than a hundred miles away.  We turned in when we saw the trace of the only trail leading into the woods. After several hundred yards we came across the waterhole, just like Jasper Evans described it.  A cheetah was basking in the sun on a grassy rise just above the waterhole.  He abruptly got up and slinked off through the woods.  We were delighted to see him, but we were also pleased that we could park our SUV on dry, flat ground overlooking the waterhole, a real convenience in an otherwise parched landscape.  Since we had to prepare our evening meal and bed down for the night, we didn’t give any further thought to the cheetah we had disturbed. 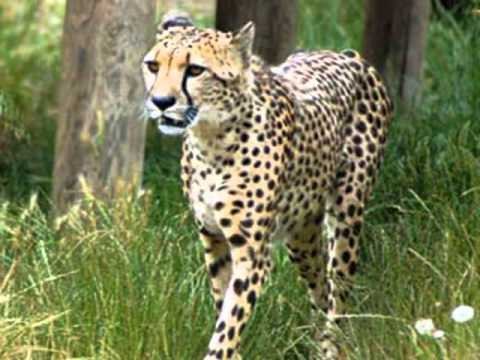 This guy needs no introduction

After spending the night at our campsite above the waterhole, we talked it over and decided that we should move our camp to another flat site about a hundred yards or so below the waterhole, so that the cheetah and other animals that visited the waterhole on a regular basis would not be fearful of coming in to drink.  The hoof marks and paw prints in the game trail told us that the waterhole got plenty of visitors.  We didn’t see other wildlife show up, but we spent the whole day in the field, conducting the survey for which we had come.  Later that day, Jasper Evans invited us to stay in his bunkhouse not far from his main residence.  We took him up on his offer, and broke camp the following morning and moved into his makeshift bunkhouse, one whose walls were adorned with more than a hundred empty whiskey/rum/wine bottles that had been incorporated into the concrete of the walls, with their bottoms facing prominently toward the interior of the living area. That recollection was described in a previous Chronicles of a Footloose Forester story entitled, Lion Hunters of the Laikipia Plateau.  Time passes, but some of the more memorable adventures have been kept alive and relatively fresh, thanks to the hard-wiring mechanisms of helpful brain synapses.