With the little bit that I can remember I will try to recall some of my life before I was married.  Born June 9, 1915 in Donora, Pa., which is south of Pittsburgh on the Monongahela River.  At the age of one we moved to Belle Vernon, which is a little bit south of Donora.  My Dad worked in Donora for an electrical contractor.  I don't remember much of my schooling, while living in Belle Vernon.  We lived next door to a wonderful colored family by the name of Smiths.  Dad's health was not too good & the doctors advised him to move west.  So at the last of May 1926, at the age of 10, Dad & Mom packed up their six kids & not much money in an old Oldsmobile Touring car.  I don't remember the year of the car, but it had isinglass side curtains you could take out & four doors.  A friend of Dad's, and his wife Lee & Minnie Tilmont went with us in their car & we headed west, destination the state of Washington.  We camped out every night in a tent.  I do remember all through the west so many jackrabbits killed along the roads.  In the evenings just about sunset, along the horizon, you could see hundreds of jackrabbits.  I remember we stopped for the night just before we went into Yellowstone Park & pitched our tent along a mountain stream.  Sometime during the night it rained up in the mountains.  We heard a tremendous noise, Mother and us kids was scared to death.  The stream was running bank full.  We had to move our tent to higher ground to keep from getting flooded.  We entered Yellowstone Park the next day and there was plenty of parking space in 1926.  We stayed there for a week, with the bears and other animals.  I did a lot of fishing on what they called Fisherman's Bridge. 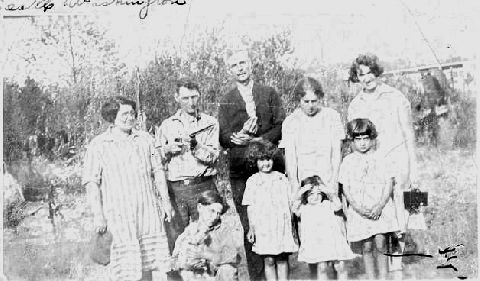 Mother was fit to be tied the whole trip taking care of us kids.  We finally arrived in Seattle, Washington, travel time over a month.  Minnie and Lee owned an old house outside of Seattle called Alderwood Manor.  We had to cut waist high grass to find the house.  The place was alive with an animal called the Mountain Beaver.  It lived in holes like a woodchuck and cut small twigs and brush like a swamp beaver.  I trapped many of them for fun.  The 1906 Winchester .22 cal. rifle that Lee Tilmont is holding in the picture, I still have.  We went to the Puget Sound in Seattle a few times and I remember catching a fish they called a dog-fish.  Dad's health did not improve so the Doctors said we should move south.  I don't think we stayed in Seattle more than a month or two.  Lee and Minnie Tilmont left us and returned to Ohio.  Sister Martha, I think, took a train from Washington to San Antonio, TX. and we drove the old touring car.  We stayed a day or two with some relatives in Los Angeles, CA then on to San Antonio, TX.  I don't know when we arrived in San Antonio.  We rented an old house with dirt floors and millions of bed bugs.  We had to keep the legs of our beds sitting in pans of water to keep them off of us.  My first encounter with a scorpion was at this house; got up one morning and put my hat on and it had a scorpion inside.  We didn't stay long in that house.  Dad and John worked in a milk plant.  To earn some extra money John and I picked cotton, dragging a canvas bag about ten foot long and picking on our hands and knees.  They would weigh the bag at the end of the row and pay us so much a pound.  One time John came face to face with a diamond-backed rattler laying in the middle of the row and that ended our cotton-picking career!  We stayed in San Antonio about four years, long enough for me to become a Boy Scout. I don't know how many different schools I attended while there.  Dad and John finally got a job at a large electric generating plant at Quanah, TX.  We built a four-wheeled trailer that looked like a hay wagon with slotted sides to haul our furniture.  We loaded up what we had and headed for Quanah, which is south-east of Amarillo.  The electric plant was at Lake Pauline about 15 miles outside of Quanah.  On the way up to Quanah we were going along pretty good when Mother hollered to Dad "That looks like our trailer!"  It had broken loose from the car, passed us on the left and crossed in front before landing in the ditch without too much damage done.  The lake was owned by the power company for use in the plant.  It was about the size of Conneaut Lake, PA, and around it were about twenty nice stucco houses for the employees.  The school I went to was on a large nearby cattle ranch.  The bus driver was one of the cow hands and the teachers all wore cowboy boots and jeans.  About all I had to do was go to school and fish and hunt.  Dad gave me his 16 gauge double-barreled shotgun for Christmas, and I can still remember the first time I shot it.  While shooting at a Jack-rabbit I pulled both barrels and got an awful surprise.

There were two neighbor boys by the name of Majors who lived across the hill on an old farm.  They would come down and we would camp out on the edge of the lake.  We would string a night line across a neck of the lake and check it each hour.  The line was held -up off the bottom with glass jugs.  We caught a lot of fish there, mostly channel cats.  As time went on the plant Superintendent got wind that he may be replaced by Dad so Dad was let go.  Well we had to move again.

Dad's brother Ed, owned a restaurant, called the Texas Lunch in Cochranton, PA and wanted Dad to come up and run it for him, so we picked up moved to Pennsylvania, Poor Mother, just got settled in a nice home and had to leave again.  That was in 1932, I graduated in 33.  We had a slot machine in the restaurant that paid out in tokens.  The vendor would come once a week and exchange them for cash.  I would keep track of the machine and knew when it was about to pay off, and then I would play.  That's how I bought my school clothes.  This was the depression years and there wasn't any money in the restaurant business.  My uncle sold the restaurant so Dad was out of a job again!  We looked around for farms to run on shares; Cochranton, New Vernon, and New Lebanon. I remember while living on a farm at New Lebanon, I helped a neighbor cut logs for a man with a crosscut saw.  It got down to 25-30 degrees below zero that winter.  We had to wrap our feet in burlap bags to keep our feet from freezing.  It was so cold that some of the trees would split wide open when they hit the ground.  The man said he would pay us after he shipped the logs and it ended up we never got paid for our winter's work!

After that I worked at a saw mill near Greensburg, PA skidding logs. That was the year my sister, Edna, died.  I then worked for a farmer who raised potatoes and furnished baled straw to the Mental Institution at Polk, PA.  There I made $35 a month plus room and board.  I joined the Civilian Conservation Corps down in Cameron County, and they paid thirty five dollars a month.  They sent $30 home because we were on relief and I got five dollars, the C.C.C. camp was operated by Army personnel.  There were all kinds of kids in camp so you had to keep everything under lock and key.  We got up each morning before daylight for exercise.  I heard my first bobcat there one evening, sounded like a child screaming.  There were lots of them around as well as Timber Rattlers.  We would hunt them at noon break.  When I returned home I had a kitchen match box full of rattles.  My only Job in the eight months there was to swing a sledge hammer to break rocks to make fire trails through the mountains.  They would let us go around a rock the size of a house, but everything else was broken up and scattered along the trail.

After I got out of the CCC I worked for a few farmers for $30 + room and board.  I finally was able to buy a 1933 ton and a half covered bed truck.  The neighbor boy, John Komar, who was built like a football player, and I would drive around and buy potatoes.  We would grade them and bag them in 100-pound burlap bags.  Then we hauled them to the south side of Pittsburgh to sell to stores there.  After potato season was over I couldn't find any more work for the truck so I sold it and bought a Model T Ford, a three pedal foot shifting job.  I then went to work for a farmer named Buchanan who also owned a grocery store/gas station on the Crawford and Mercer County line.  There I met Mildred (Midge) and got married in 1939.

We had a tough time making a go of it for a few years.  First we stayed with Ben and Idesta, my Dad and Mother until they moved to Norrisville, PA.  We then stayed with her dad and mother, Julian and Marie Vincent.  I helped Jule cut mine props for a neighbor on his farm for twenty cents an hour, ten hours a day.  That winter, at the McDaniel farm, above Jule & Marie's we cut down most of the apple trees to burn to keep warm.  From there we moved into the Cochranton Booster Club Building which housed a bowling alley, dance hall, and barbershop.  All we had for furniture was a card table, two crates, a bed, three-burner oil stove, and a tin cupboard.  Then we moved to a four-room cottage along French Creek where we lived when Leonard and later Nancy were born.

I worked at Talon in Meadville, Pa. where I lost the ends of my fingers in an accident while operating the chain machine, I had an allergic reaction and got lockjaw.  Then I worked for the Erie Railroad as a welder's helper, and was in a motorcar accident.  I remember the Japanese attack on Pearl Harbor while working for the R.R.

From there I went to work on the Western Game Farm for the Pennsylvania Game Commission in 1946, as a laborer for $0.60 an hour.  Dale and Jeff were born while I was working there.  I retired in August of 1977 as the Superintendent of the Game Farm, raising ring-necked pheasants for release into the wild, making $23,000 per year. Mid and I built our home near the Game Farm on Henry Rd., where we have lived since retirement.

My father passed away 30 September 2006, and we were glad that Dad had written this story.

What a fantastic legacy to leave for posterity. Great experiences even through the tough times.

What a fantastic legacy to leave for posterity. Great experiences even through the tough times.
Cancel Update Comment

Thank you for sharing your father's story. What a priceless gift to his family!

Thank you for sharing your father's story. What a priceless gift to his family!
Cancel Update Comment
Follow