I have a special memory of my first pet when I was 10 years old.  Her name was Gigi.  I have no idea how I came up with that name.  Gigi was part poodle and who knows what else, maybe terrier.  She was small and black with slightly curly hair and a long tail.  Her temperament was feisty and energetic, and we soon learned that she completely lacked social skills.   As I recall, she was given to us because she needed a good home and my Mom loved animals, especially dogs.  She slept in the garage but could get in the house when she wanted.  I would sneak her into my bedroom at night so she could keep me company.  I liked the feel of her warm snuggly body next to me.  I remember playing hide n’ seek with her in the house and thought it was so much fun to hear her high pitched yip and excited bark when I let her find me. We had a two story house so I could let her chase me from one floor to the other.  Of course we had to do this when my Dad wasn’t home because he couldn’t stand the noise and didn’t want anything interfering with his television programs.

Like many dogs, she had the need to chew and chose to destroy the tops of my brother’s cowboy boots.  Yep, she ate the tops right off them.  We were probably the first to use rawhide strips as a chew toy and didn’t even know what a great idea it was.  My friend, Janet, stayed with me one weekend and Gigi decided to show another side to her quirky personality.  She got into Janet’s suitcase and ate the crotch out of her panties!  I think my Mom had a difficult time explaining this to Janet’s Mother.  Luckily, her Mom thought it was pretty funny.  Needless to say, Gigi had a cute name but she wasn’t winning any friends.

As she took her place with her new family she became very protective. During the day my little furry friend was outside and had to be on a leash because she would run away.  People didn’t have fences around their yards so there was no other way to keep her enclosed.  Not having the freedom that she liked, she became even more protective of her territory and began to try and attack the mailman.  This went on for a couple of weeks.  He eventually complained and the post office told my Mom it was either our mail or the dog.  It had become one thing after another so by this time Gigi was wearing out her welcome and she had only been with us for four or five months.

Don, the man who mowed our lawn, had somehow developed a friendly relationship with her and when asked, he agreed to adopt her.  So here she was again with a new family.  My Mom didn’t feel she had any other choice because no one was home during the day to make sure she didn’t get into any mischief.  Don had several children and I imagine they kept her busy and out of trouble.

I felt hurt and cried when she left; my heart was broken.  It was easy for me at the age of 10 to ignore the problems she caused and to concentrate on the joy she gave me.  I can still see her sitting up begging for food with her big brown expressive eyes. She liked to play fetch with her red ball and took delight in teasing me by letting me think she was bringing the ball back to me.  She was only in my life for a short time but I experienced the unconditional love that only a pet can give.  They love you when you’re happy and when you’re not, they love you in the quiet moments when you’re petting them and when you’re wrestling on the floor  with them.  They have no expectations from you and don’t judge your actions.  Love is all they ask and, in return, they give you their boundless love, their loyalty – their ALL. 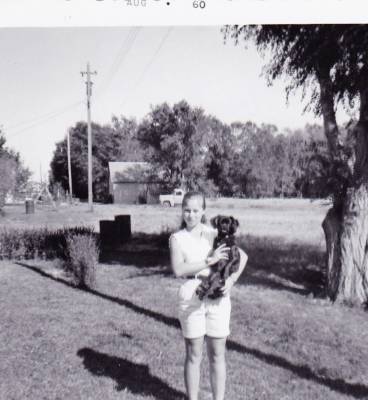 Every child needs a pet--and of course, yours was a dog! The upside was that you didn't have to feed and take care of her for more than 4-5 months, but she crept into your heart anyway.

Every child needs a pet--and of course, yours was a dog! The upside was that you didn't have to feed and take care of her for more than 4-5 months, but she crept into your heart anyway.
Cancel Update Comment

Great Story... as a Professional Dog trainer I have seen such dogs many times and the joys they bring to children and adults

Great Story... as a Professional Dog trainer I have seen such dogs many times and the joys they bring to children and adults
Cancel Update Comment
Follow