“If you ever go across the sea to Ireland,” the plaintive words of an old but enchanting melody begin. The haunting Irish melody forms your thoughts into dreams as it entices you ever deeper with, “then maybe at the closing of your day, you will sit and watch the moon rise over Claddagh and see the sun go down at Galway Bay.”  Drawing you in with simple words and enchanting melody scores your imagination as surely as if you had notched a walking stick with a jackknife.  The notch will always be there.

So, if you ever go across the Pacific to Java, be sure to look for orange sunsets from the volcano Krakatau; and seek out the mysteries of the jungle at lands end.  That would be at Ujung Kulon, which translates into West Point or Western Tip in the Javanese language. Walking deep into the dense forest on the tiny island of Pulau Peucang, a mere half kilometer from mainland Ujung Kulon, is not as foreboding as one would think because the now-extinct Javan tigers are no longer a danger, neither are the one-horned Javan rhinos that inhabit the peninsular portion of Ujung Kulon and sometimes attack people.  Rather, the dozens, perhaps hundreds, of mouse deer, rusa, and barking deer found on Pulau Peucang have progressively made the small island less fearful and easier to traverse. Because of their high numbers on an island of only about 100 hectares (240 acres) where they subsist on understory vegetation, the effect has been a distinctive thinning of the shrub layer that normally is very dense in other parts of Ujung Kulon.  That makes it rather pleasant to venture into their domain where it is not too difficult to spot them and even to come across the discarded horns of male deer and the tusks of warthogs. But to a Footloose Forester, the real attraction is the wide variety of tropical vegetation.

Once in a while during a dream like the one last night, the Footloose Forester yearns for the opportunity to return to Pulau Peucang and to snap photos of the magnificent old growth trees found there.  As a game reserve and part of the promulgated Ujung Kulon National Park, both the vegetation and the wild animals are protected.  Thus, he is all but certain that if he returned to seek out one magnificent specimen fig tree, in particular, it would still be there and he would gain satisfaction in sharing its photo portrait with others.  In this day and age of GPS technology, the Footloose Forester yearns to mark down those geographical coordinates and publish them as part of his exploration notes.  And with those coordinates, the next person who ventures into the NW sector of Pulau Peucang and comes upon that spectacular fig will become enchanted with a memory that will never disappear.  Chances are good that using coordinates 6° 43'  49.79"  S and  105° 15'  06.93" E will get you within sight of that magnificent fig tree. 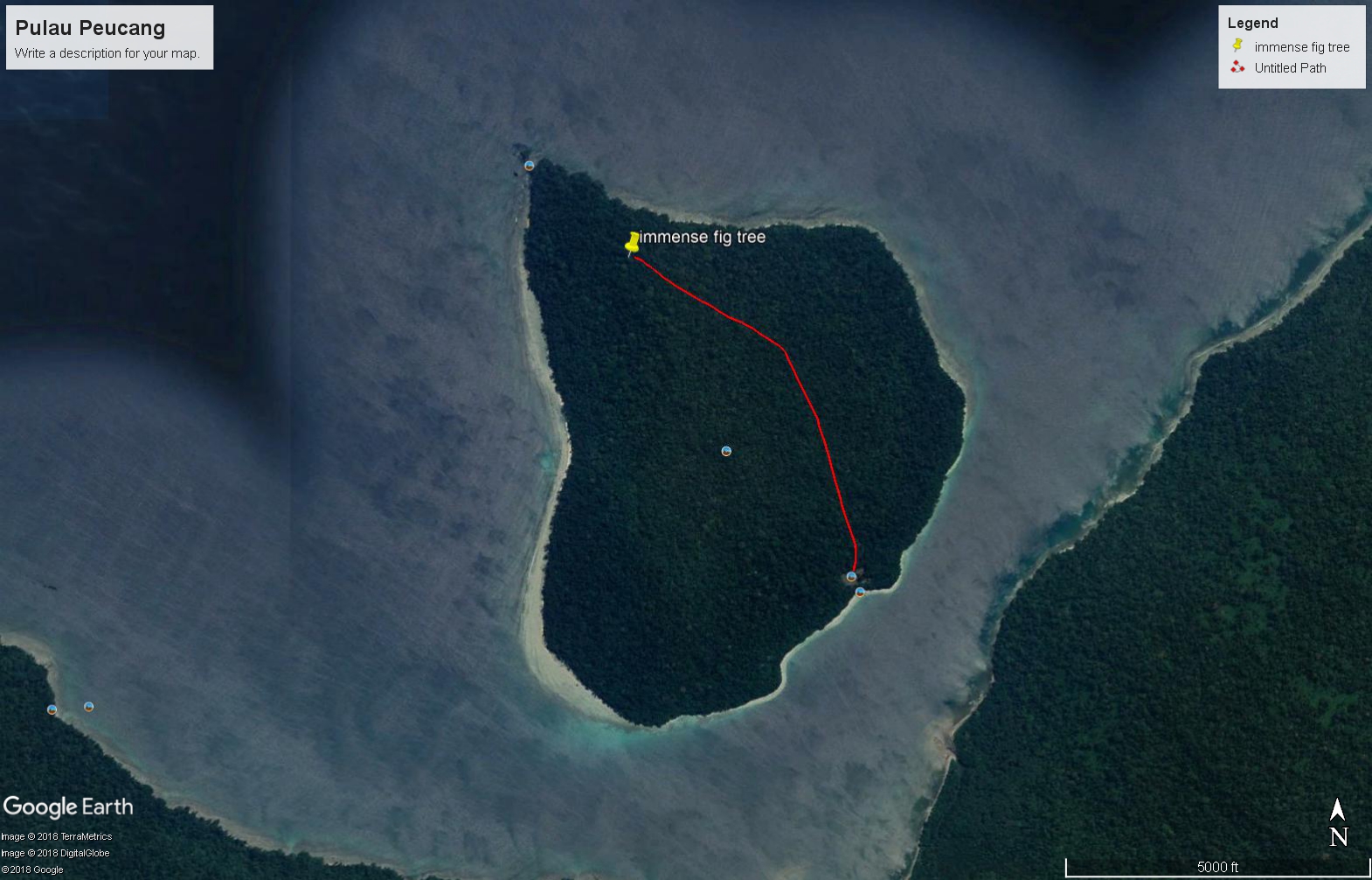 The botanical genus Ficus has always sparked widespread interest because of the diversity of characteristics found in the genus. With more than 800 species in the genus, the Footloose Forester has a personal fondness for only a few of them.  Nevertheless, the sprawling expanse (over 4 acres in canopy surface area) of the enormous Ficus bengalensis in the Kolkata Botanical Gardens in India, to his favorite Ficus benjamini in Honolulu, Hawaii, to the bountiful cultivated fig in our front yard, have heightened his appreciation for figs, wherever they are found.

If ever you go across the sea to Java, and continue by boat into Ujung Kulon, be sure, however; to keep your eyes peeled above you and below you. The 7-8 meter-long reticulated python that is the king of the jungle on placid Pulau Peucang is big enough and heavy enough to devour you.  He likes to climb trees and wait for his prey. That prospect alone is enough to curl the hair on the back of your neck.