L is for Laos

Laos is as exotic a country as most people will ever visit.  In the 1960s when the Footloose Forester first visited, the market place reeked of the distinctive smell of marijuana in the morning; because it was the only place he knew where the open sale of Cannabis was legal.  So you could smell burning pot from far off, and then buy it by the pile or by the kilo from vendors in open-air markets who were willing to bargain.  Not that the Footloose Forester was really that interested in staying stoned with a  foul-smelling, habit-forming drug that produces a zombie-like state. The Footloose Forester knew a thing or two about Thai Stick, but it definitely was refreshing to know that at least one country in the world was liberal enough to allow people to make their own mistakes.  Of course, that was many years ago and external political pressures surely have changed the attitudes of Lao politicians who now have a communistic viewpoint and so may want positive world opinion about them. 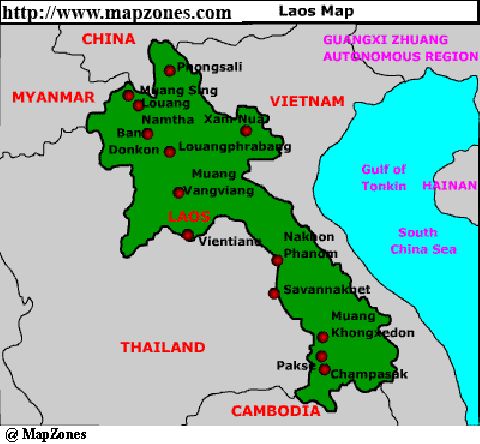 The trip to and from Laos was indeed a memorable one.  Hitch a couple of rides from Bangkok (one long ride was on a loaded log truck) to the banks of the Mekong River, just beyond the Thai Customs Station; and then wait for a one-man water taxi to take you across the river. Once on the other side, the Footloose Forester went straight to the Lao Customs Station.  Though it was high noon, there was nobody at customs.  So the Footloose Forester walked a half-mile downstream to the nearest tea stall, looking for someone in an official-looking uniform.  Nobody like that at the tea stall, so he walked back to the small and isolated shed that was the Lao Customs Station.  Still, nobody showed up, so the Footloose Forester shrugged his shoulders (and maybe made a few complimentary remarks about Lao security) and started up the dirt road to Vientiane. Eventually, someone in an old truck stopped and picked him up and later deposited him in the middle of the capital city.

The overnight stay was uneventful but Footloose Forester remembers that the floors, walls, and everything else at his humble hotel was made of unvarnished wood. The return south to Thailand was a repeat of the unknown and probably illegal entrance into Laos. It meant going to the same customs station on the banks of the Mekong, and again finding nobody present.  So Footloose Forester did what he had learned to do in the early years of his travels; he shrugged his shoulders (and blew a few choice comments at the clouds) and proceeded to exit Laos the same way he came in-- unseen by the authorities. So there was nothing in his passport to indicate that he had ever hitchhiked to and from Vientiane, or had even been in Laos.  It was the first time he played cat and mouse with immigration officials, but it was not the last time.  That would come years later in West Africa in places where the borders were not marked.