My father told me about wild mushrooms way back, but it was a Hungarian immigrant in New Jersey who convinced me that if you know what to look for, you need not get sick by eating them. So, about 50 years ago the Footloose Forester started to pay attention to various species of mushrooms and has been eating some kinds of wild mushrooms ever since. Some people scoff about learning things from books, but he did learn from books and learned the most about mushrooms by going to a technical library and reading in-depth about them. In fact, there is a small book on his bookshelf downstairs entitled Wild Mushrooms of England and Ireland, a book that he purchased in a second-hand bookstore.

His wife Thu also had confidence in picking certain types of mushrooms. She taught him about the Asian straw mushroom, and a researcher in Namibia taught them both about termite mushrooms. When the monsoon rains came to Kenya, we went out to our backyard and picked the termite mushrooms that appeared near the termite mound there, just as predicted. And we ate them, too.

Around home in Pennsylvania the Footloose Forester concentrated on the common field mushrooms; and the giant mushrooms that are related to them. If you look them up, the common field mushroom is named Agaricus campestris and his giant cousin is (or was) known botanically as Agaricus angustifolia. In his chronicle about Malawi, he wrote about the time he and three Malawian colleagues returned from the forest one day with their Land Rover piled up to the back window with dinner-plate-sized mushrooms for all. 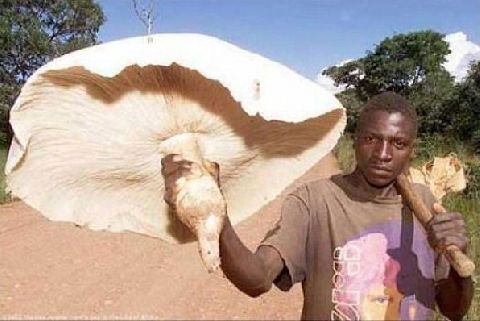 And he had almost forgotten about the morels that he used to look for when he was doing forestry stuff in California. One time on the El Dorado National Forest he hit the jackpot and came back from the woods with about 25 pounds of morels. They were great with steak that evening, and with bacon and eggs the next morning. What his crew in the fire barracks couldn’t eat, he gave away to the tree planting crew he was supervising.  Early on, he learned to keep empty paper bags or cloth sacks in his truck, awaiting the opportunity to collect.  In later years it was the empty plastic bag that got stuffed in the bottom of his golf bag.  Incidentally, golf courses are great places to find wild field mushrooms.

You would be surprised how many people resist picking mushrooms on their own, or preparing them in a meal, even if you do the picking and explain how to tell an edible mushroom from a toadstool. Some people decline to try them; even after they watch you eat a raw one right in front of their eyes. Maybe they think that eating something straight out of the ground cannot be wise. Not to be deterred, an optimistic Footloose Forester invited his 8-year old granddaughter Jaelyn Alexis Hunt to go picking mushrooms with him. After a few minutes of tentativeness, because she said they felt icky like a worm, Jaelyn was scouting for the youngest buttons with delicate pink-colored gills, and rejecting the older but still edible ones when the spores started to darken the color of the gills. And the following day, it was Jaelyn who went picking mushrooms alone and brought back a couple that did not have brown spores. She listened patiently as the Footloose Forester explained how we were going to test mushroom spores for edibility. When the test results were displayed on a sheet of white paper and when that knowing look came into her eyes, the Footloose Forester knew that 8-year old Jaelyn would grow up anticipating fun times picking those "Magic Mushrooms."

Working As A Career