The Wild Horses Of Assateague Island

The Wild Horses Of Assateague Island

They have been living near the beach for the last 300 years, so the wild horses of Assateague Island in Maryland and Virginia probably resent the hundreds of bathers, beachcombers, and volleyball players they encounter on warm summer days. Assateague Island National Seashore in Maryland and Virginia bounds a 36-mile-long Atlantic Ocean barrier island that is administratively parceled into Assateague State Park in Maryland, near the northern end; and Chincoteague National Wildlife Refuge at the southern terminus in Virginia. Although the Commonwealth of Virginia and the State of Maryland have separate administrative responsibilities and have established different rules regarding visitor usage; the whole of Assateague Island belongs to the wild horses. They have sovereign supremacy.

In an effort to maintain population control and vibrant health of the herds (or bands) in Maryland, the US National Park Service asserts ownership of the horses; and tries to keep the herd size under 125. In Virginia, the horses are privately owned by the Chincoteague Volunteer Fire Department which keeps the number of horses below the limit of 150 adults allowed by the grazing permit that has been issued to them. The 60-90 foals born each year are rounded up and later auctioned off to raise money for the fire department.  The novel "Misty of Chincoteague" written by Marquerite Henry in 1947 is all about the wild ponies of Assateague Island and how they came to settle there; therefore, her book always comes up for discussion during the annual swim between Assateague and Chincoteague.

As part of the sales process, in July of each year, the horses chosen for auction are rounded up and swim across Chincoteague Inlet to Chincoteague Island. This past year the swim took only six minutes but had plenty of witnesses.

As if the northern band of wild horses in Maryland had developed their own lifestyles, they use the beach to transit from the shoreline to feeding grounds. The authorities are well aware of this, so have posted large signs that read: WARNING: HORSES BITE, KICK AND CHARGE. DO NOT APPROACH WITHIN 10 FEET OF HORSES. 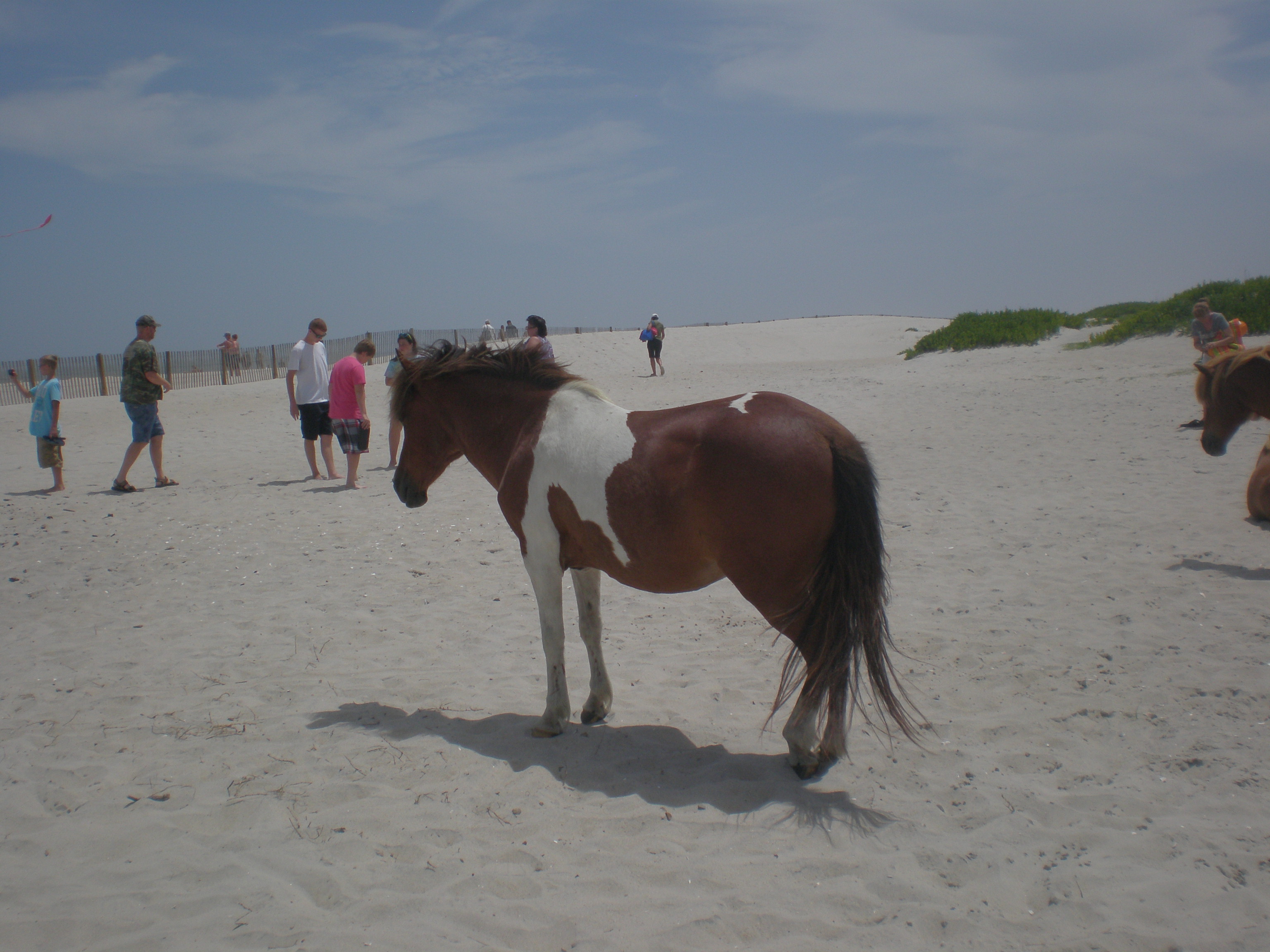 The band of nine horses seen in the photo above was clearly agitated and somewhat frustrated as they tried to negotiate passage from the beach to the grassy pasture on the back of the dunes near South Ocean Beach in Maryland. It took the determination and initiative of their stallion leaders to finally clear the way through the curious and sometimes imprudent onlookers. 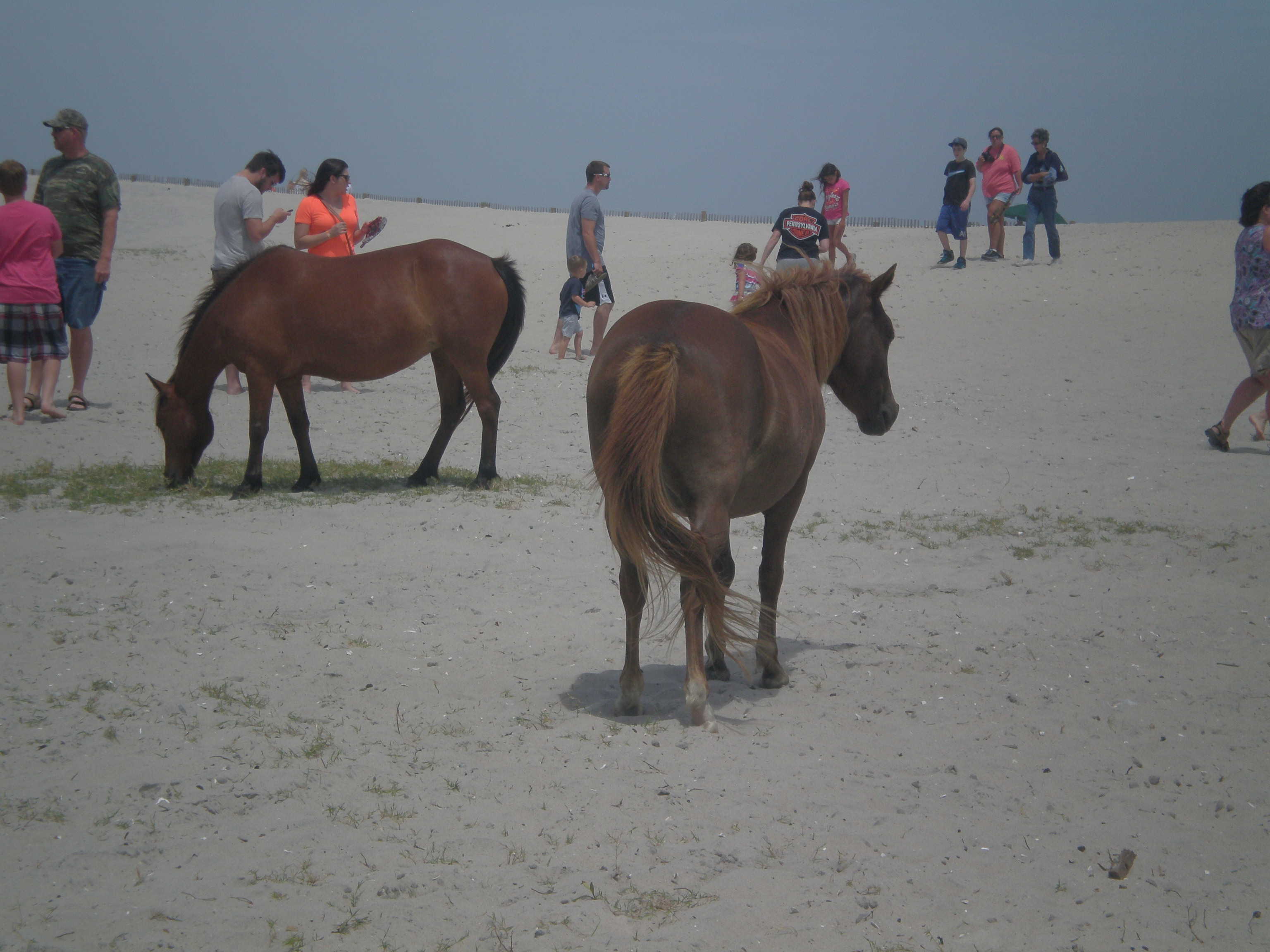 The two stallions that led the way through the beachgoers

The leaders tried at least three times to get the gawkers to back away voluntarily; but in the end, they demonstrated their leadership by leading the rest through the gaggle of beachgoers, to the serenity of the back dunes.

In the 2013 update to this story, Miss Jaelyn Mushroom Hunt(er) joined us to pay a visit to the horses.  The photo below shows the backside of Jaelyn as she photographs a filly taking it easy on the beach.