Blame it on his favorite uncle.  As a youngster in short pants, the Footloose Forester sometimes heard his mother refer to her younger brother as Tiger; and in reality, her brother Elmer carried the legal name of Elmer Tiger Best.  A few other people in town sometimes called him that, but not on a regular basis.  It didn’t matter; anytime that one of us youngsters wanted to bring it up, we could acknowledge that we had a tiger in the family.  And Uncle Elmer Tiger Best lived with us, from time to time, so we had a true reality check in our presence.

Tigers are beautiful animals, no doubt about it.  They are also feared, and few people would argue against that proposition. Thus, when the Footloose Forester met his future Mother-in-Law many years later, he found out that some of her friends in Hawaii occasionally referred to her as Tiger Dao. He was thus aware that she just might be someone of steely determination. It just so happened that there were real tigers in the region in Cambodia where she briefly lived and gave birth to her only daughter, so her friends were making apt comparisons about things they could relate to.

But Tiger Dao was not aggressive or threatening. On the contrary, she was quiet, yet resolute and imposing in demeanor.  And fortunately for her future Son-in-Law, she was absolutely loyal.  In over 35 years; and while she was still alive, she never once said anything negative about him and never took a position which did not support him.  In fact, the wife of the Footloose Forester consistently said that Tiger Dao considered him as her son, not as a Son-in-Law.  That thought gave him an immense sense of pride.

Eventually, Thu, her only daughter, and wife of Footloose Forester got teased about being a tiger, herself.  During countless sessions of harmless name calling, she herself warned her sparring husband to watch out; her mother was known as Tiger Dao, and she was Tiger Thu.  To her, he acted like a bear—a young bear.  “Your father acts like an old bear, and you are a young bear.”   Henceforth, in letters and on postcards sent from afar during those many separations during work assignments, he addressed her as Tiger; and he signed the letters as Bear.  She always wrote back with the signature, Tiger.  We became The Tiger and The Bear.

Some eight years after we were married at the Three Bells Church in Nha Dinh Province outside of Saigon, during which we exchanged golden wedding bands, the name Tiger became permanently and literally etched into our daily lives.  The words “Bear Loves Tiger” are etched inside her wedding band.  She did not know it at the time, but he had secretly purloined her ring from her jewelry box a few weeks before Christmas in 1976 and took it to a jewelry store for engraving.  He did not get found out.  After the ring was engraved, he returned it to her jewelry box.  A few days after Christmas he announced; belatedly, that he had a small present for her. Only when she read the tiny words with the aid of strong sunlight, did she know that his intention was to proclaim his everlasting love for her with the engraving… Bear Loves Tiger.

Over the years, the feistiness of her personality has only strengthened.  These days, more often than not, he refers to her as his Bengal Tiger. Her determination, steadfastness and decisive quickness are things that he respects about her.  But rather than fearing her as a prowler with his flesh as the main agenda; he feels secure in the knowledge that she is his protector; and a protector of her lair.  Yet, even under those assumptions, he knows better than to mess with Bengal tigers.

Other tigers, in other places, shared at least one thing in common with the Bengal Tiger.  Whenever he ventured into tiger habitat, he always thought of her. Maybe he was too disillusioned to think that they would do him no harm; but he preferred to think that, like most wild animals, if you do not threaten them, they can read your intentions and your body language, thus turn away.  In reality, there are precious few tigers left in the wild.  The Footloose Forester was willing to believe that he would be safe if he acted with due caution. As a spiritual person at heart, however, he regularly prayed for courage each time he set off alone into the jungle.  The latter words of The Lord’s Prayer are among his favorite entreaties….”and lead us not into temptation, but deliver us from evil.”  Wisely or not, true or not, those words did give him enough courage to pursue his tasks.  He was always delivered from harm.

The Javan tiger of ages past is now thought to be extinct and declared so in 1994.  Up until 1971, there were less than 12 animals still alive in south-eastern Java.  But the last reported photograph of a Javan tiger taken in the western part of Java was taken in Ujung Kulon at the extreme western tip of Java where the Footloose Forester was doing field research in the forest.  An excellent picture of two large Javan tigers is shown on the inside cover of the book Ujung Kulon.  And the pictures were taken by the same man who wrote the book in 1970.

The full title and sub-title of the book:  Ujung Kulon- the land of the last Javan rhinoceros, suggests that other wild creatures still roam freely there. The rhinos were to be feared, as were other forest dwellers, such as the leopard, Panthera pardus melas; the crocodile, Crocodylus porosus and the reticulated python, Python reticulatus.  The Footloose Forester was ever wary of all of them but never expected to come face to face with a Javan tiger, the one animal he most wanted to encounter. 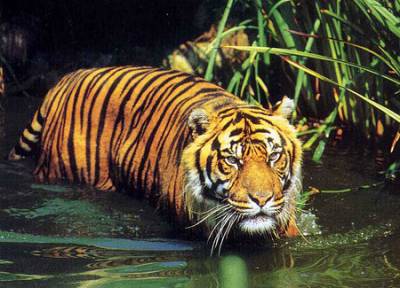 Nor did he think that he would encounter a Sumatran tiger when he visited rubber plantations in Malaysia. They are mostly nocturnal creatures, and he did his fieldwork during daylight hours.  And they never visited our camps elsewhere, even when we slept in the woods.

The real Bengal tigers of the Sunderbans region of the Ganges River Delta of India and Bangladesh do not encounter too many humans, if for no other reason than the fact that the Sunderbans are practically inaccessible. Humans may skirt the fringes where they can approach in boats, but the interior of that vast maze of mangrove and marsh is inhospitable and uninhabited.  The Footloose Forester was content to view the Sunderbans from afar.

If his sense of awe and respect for tigers is borne out of fear, little wonder that the Footloose Forester will always have an implacable affinity with tigers. 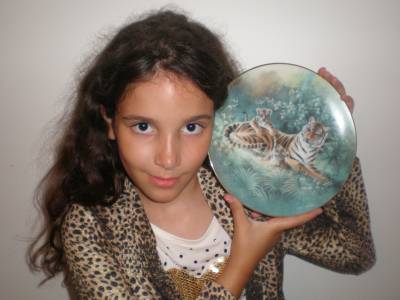 On the other hand, our little family shares a reverential awe about tigers.  Some six months after first posting this story, visiting Grand Daughter Jaelyn insisted on buying a collector's plate featuring a Siberian Tiger.  Lucky for us the venue was at a Virginia flea market and she sweet talked the vendor into giving it up for the bargain price of $1.40. The original purchase price was listed as $11.95.  It was a true bargainer's coup, and another tiger added to the legacy.

Five Principles To Live By
My Folkers Great Grandparents.

We Took the TukTuk

Legacy Of The Land

What Do You See?