Being in Jordan during the mid-1960s was a bit of good news-bad news for a Footloose Forester hoping to take a dip in the Dead Sea and spending a day in the western part of Jerusalem. Merely walking through Herod’s Gate from East Jerusalem would have put him in Israel, from which there was no return into another Arab country except Egypt. In those days, the Arabs were adamant about not permitting private citizens into Arab countries if they had evidence of travel in Israel on their passports. Although the Israelis were willing to accommodate travelers who wanted to make a one-way trip through Israel to Egypt, or to Europe, by issuing a visa on a separate piece of paper and not stamped in the passport, the Footloose Forester did not have that option. The bad news was that he had most of his luggage stored at the YMCA in Beirut, Lebanon, so he had to go back to an Arab country to retrieve his stuff for his return trip to Pakistan where he was serving an assignment as a Peace Corps Volunteer.

The good news was going by bus all the way to the Dead Sea east of Arab Jerusalem, without incident. As a major geological and biblical feature, the Dead Sea is the lowest place on earth, at 1385 feet below sea level. These days it is part of Israel. The Footloose Forester had been to Death Valley in California which is reputedly second-lowest in elevation, at 282 feet below sea level. But the Dead Sea, at more than 1000 feet more sunken, also offered the opportunity to swim in the saltiest body of water in the world.

Prepared for that adventure, Footloose Forester was anticipating that experience as his bus rolled eastward over the Allenby Bridge above the River Jordan where John the Baptist first met Jesus and baptized Him in its shallow waters. When he arrived at the shores of the Dead Sea, the Footloose Forester had his choice of shoreline resort change houses in which to change into his swimsuit. The next part of the plan was to carefully approach the water and back in. He carried a newspaper that he intended to read while floating on his back. 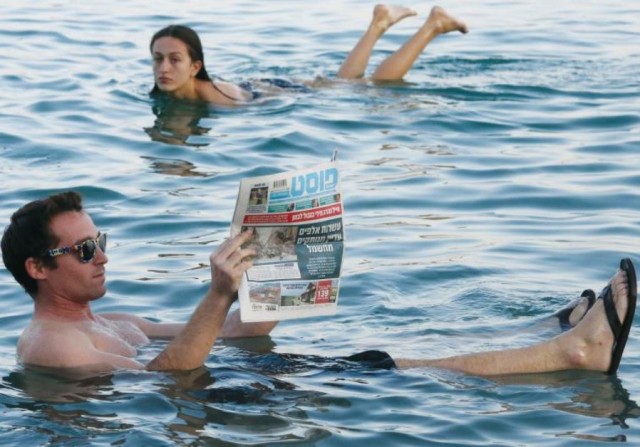 If you are careful you can keep the paper dry

While bobbing like a cork in water so salty that one cannot sink, he read the first page of the newspaper while getting only a few drops of water on the page. He was not really interested in what was in that newspaper; his objective was to verify for himself that the human body is so buoyant in the Dead Sea that it is indeed possible to read a newspaper while floating there. Check off another item on his personal “bucket list.”

Walking to many of the major biblical sites in and around Jerusalem was pretty easy; in fact, walking was a necessity in the old city where the streets are so narrow that they never accommodated automobiles. And visiting the major sites like Calvary, the Garden of Olives, or the Dome of the Rock by taxi was inexpensive and speedy. Local attention to tourism had been highly integrated for decades. But Footloose Forester also wanted to get around like the locals, so went to the main bus station to ride one of the regular buses to Bethlehem. For whatever reason, the Footloose Forester remembers the bus trip to Bethlehem better than other things he saw in Jordan. The Holy Land was, nevertheless, very special and remains as an enchanting memory in the Chronicles of a Footloose Forester.

What did that oh-so-saltly water do to your skin?

What did that oh-so-saltly water do to your skin?
Cancel Update Comment

The salty water felt like taking a bath in olive oil. Fortunately, they had several bath houses nearby, so I simply washed everything off and shampooed my hair. Having the change of clothes was part of the plan before I left Beirut, Lebanon.

The salty water felt like taking a bath in olive oil. Fortunately, they had several bath houses nearby, so I simply washed everything off and shampooed my hair. Having the change of clothes was part of the plan before I left Beirut, Lebanon.
Cancel Update Comment
Follow