We met in a sparsely furnished office building whose windows rattled when the wind blew.  Two young and eager Pakistani soil scientists had been assigned to escort us to one of their work sites on the western edge of the Cholistan Desert.  How we got there is a mystery, like picking up a book and discovering that there are several pages missing from the story you were reading.  The next page begins where we were entering a village that had no paved roads and only one main street lined with simple wooden, unpainted kiosks.  We passed through on foot, on our way to the site on the other side of a short but steep hill off to the right. 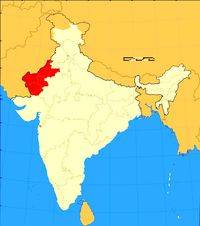 A fierce windstorm arose as we climbed the hill.  As we got close to the top of the ridgeline, the wind threw grains of salt into our faces.  Normally there were sandstorms coming off the Cholistan at this time of year, but this storm brought crude grains of salt. Without complaint or comment, all four of us managed to reach the lee side of the hill where we presumably could rest and escape the worst part of the wind-driven salt storm.  Curiously, there was a long, sturdy bench beckoning us to come and rest in the shade of a concave pocket below the summit of the hill.  The wide bench was perfectly level and constructed of polished dark granite.  There we sat and rested.  And rested and sat.  In fact, we sat there without speaking to one another for two hours.  Finally, Dr. Norm French, a Range Management specialist from the Utah State University spoke up.  Patiently and deliberately, he asked if this was the project area we were supposed to be visiting.  Yes, replied one of the Pakistanis; and by the way, he asked that we submit a report of our visit to convince their supervisor that they were out on the job.

We were taken aback at his request, but before we could make comment the young Pakistani began to explain the job and the circumstances to us.  Young and intelligent soil scientists like himself were assigned to take charge of certain territories and to protect, develop, and manage the resources there.  But they had no staff, no equipment, no financing, and no plans that they could launch on their own.  So, sitting on a stone bench for two hours was part of the site visit; and asking someone else to write an official report explaining the circumstances was another part of the strategy.  The young Pakistani was not bitter, but he was hoping that others would see the situation through his eyes.

The experience was a dream but the Cholistan Desert is real and Dr. Norm French really went there to help design and enact plans to protect and conserve natural resources there.  One of the more remarkable experiments was to build a series of exclosures to keep herds of sheep and camels from eradicating all of the grass and shrubs in the region.  Despite being a desert, there are species of grasses and shrubs that could be self-sustaining as plant communities if only they are not overgrazed.  His exclosures proved it. They were meant to keep something out.  One or two exclosures that the Footloose Forester visited had within them several sturdy clumps of grass that were over six feet tall.  It was only the four-strand perimeter of barbed wire and an armed guard that kept the animals out.  A solitary armed soldier in the middle of the Cholistan Desert, standing guard over a few clumps of grass?  Truth is stranger than fiction.  And one reason why these Chronicles of a Footloose Forester often have the masthead banner Essays, Stories, Adventures, Dreams.