Glass Half Full? Half Empty?

Glass Half Full? Half Empty?

Life holds more than a few mysteries.  We can plainly see a water glass that is half full/half empty, but the question is, which is it?  Some people will answer HALF FULL and believe it without reservation and will be able to justify their decision. Do they also give a bit of latitude to the argument that it is HALF EMPTY?  Social scientists probably don’t have much evidence on that counter-argument.  Similarly, those who think the glass is HALF EMPTY likely have a few examples to pose on why they think the way they do. They also may not be inclined to ascribe reasons why the counter-argument is true.  Both the HALF FULL and the HALF EMPTY camps have likely retained their opinions and their reasoning for many years and did not have any inducements or challenges to their non-political positions. 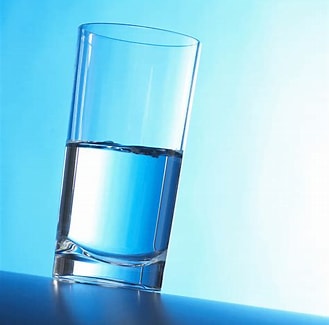 A throw-away symbol?  An opinion that has no social significance?  A silly pop psychology game?  If the answer is Yes, it is a throw-away symbol and opinion with no demonstrable value, that answer alone may play into the hands of the same cadre of social scientists who are busy at the game of describing stereotype personalities.  If the answer is No, the same procedures at stereotyping people are in play, within the same cadres of social scientists.

Some employment consultants and social media writers would have you believe that your answer to the question is vital in making a good impression in a job interview.  More important, they say there can only be one correct answer.  Since the Footloose Forester admits that such leading questions are part of the mystique of the many mysteries that have nagged him over the years, he also admits that he has never seen a definite case made for the “correct” answer.  His guess is that the employment consultant wants to say “the glass is half full” (your organization has room to grow) then follow that up with, “and I can help you get there.” That would be my guess why some employment consultants want you to say that the glass is HALF FULL.

The iconoclastic and frequent contrarian in the person of the Footloose Forester has always believed that one size does not fit all, and that there is good reason to believe that the glass is HALF EMPTY. Empty or full, half empty or half full is a temporary state of being.  Things can change.  Things do change.  People don’t change much but companies change often because the people who run them are ushered in--and ushered out.  General Electric?  Where did you go?  At one time you were a giant in industry and manufactured thousands of products.  What do you, as General Electric, now manufacture?

Not only is the stage of fullness of a water glass a temporary condition, the stages whereby it goes from empty to full are incremental and can be observed.  At the point of HALF FULL, it is also half empty.  It all depends on one’s point of view and the direction of the dynamics.  Is the company filling the water glass?  Or due to economic forces, is the glass being emptied?

The social scientists would like to believe that the Half Full people are optimists and that the HALF EMPTY people are pessimists.  Other than the fact that many of us don't like to be labeled, the rather static label seems to be an either-or determination.  One size or only one label does not fit all.