Isaac Azimov wrote more than 500 books.  In his fruitful career, he also managed to earn a Ph.D. in Chemistry.  So, when a colleague at the car rental company said that the Footloose Forester could not have gone to all the places he claimed, in a single lifetime, he said it behind his back.  Nobody challenged his assertion but neither did anybody ever inquire of the Footloose Forester if the claims were true.  By the way, the Footloose Forester never made a specific claim, only occasional remarks about some places he had been.  If it seems that some tales he has told in his personal chronicles are unbelievable, that would be due to his lifelong quest for adventure—and acting on his immediate and many future impulses. Parts of his unbelievable past took place in 106 countries and/or territories.

Colonel John Craig, after he retired from the U.S. Army, had a TV show that he called “I Search for Adventure” that featured the many places he sought out as adventure destinations.  The show was a prototype idea that fed into the dreams of a Footloose Forester who hitchhiked for 10 days from New Jersey to California, in his own version of searching for adventure; and continued on for many decades.

As a young teenager, the Footloose Forester favored adventure books, such as those written by Jack London, Zane Grey, and Brett Hart. The Call of the Wild by Jack London was akin to a mantra.  But in a vague scheme to make travel and adventure come true, he chose to study forestry and hopefully embark on a career in the forests and wilds of the American West. Seeking adventure started with earning the credentials to position himself as a candidate for the title of Forester.  But his ambitions were personal ones and required that he prove himself.  He would be satisfied to be known as a dirt forester because although he had ambitions, he was not ambitious in the sense of climbing over the backs of others.  Sure, the forests have bears, moose, and rattlesnakes; precisely the kinds of prospects he sought as spontaneous actors in the anticipated adventures he dreamed about. Actions speak louder than words.  If he wanted adventure, he might have to create a few adventures on his own.  That included scheming about ways to travel in and through foreign countries.

Quite often the Footloose Forester came in contact with others who were adventurous in their own way, but seldom did it happen that others agreed to venture together with him as companions in fulfillment of those adventurous prospects. Dave Noni was an exception.  He was a slightly built forestry student from California who made the suggestion that we go spelunking together to explore a private limestone cave in Calaveras County. We had previously met on the fire line and enjoyed the thrills of slaloming down steep slopes at the end of our shift putting out fires. He was the one who brought up the subject of going spelunking, a hobby he pursued as a lone wolf adventurer.  Dave Noni found a taker in the Footloose Forester. That solo adventure was recorded in the chronicle entitled “Spelunking in Calaveras County.”  If that story says that we had to crawl backward for more than an hour in order to descend feet first into a hole in the cave’s floor, far from the entrance, some people would not believe that it happened.  It happened. That is what we did.  Dave went first and chose to move left when he got to the lower level.  The Footloose Forester went right because there was not enough room for two people on the left branch.

If the Footloose Forester said that he saw and estimated 3,300,000+ sea snakes swimming as a single colony and in the same direction off the coast of Java, that would be because he took the time to estimate the rectangular field of vision from the side of the Badak, an Indonesian government boat that was heading through about 20 miles of swimming snakes. An unlikely vision, an unbelievable tale. But it happened and he witnessed it. Each field of vision was estimated as the length of one side of the boat and as far out as he could see to count. The approximately 75-80 snakes per field of vision were then multiplied by the number of counts he made, over water for about 20 continuous miles.  That episode was recorded in the chronicle entitled “Nightmares and Daydreams of Indonesia.”

Speaking of snakes, a simple mention of rattlesnakes is easy enough to make into a tall tale.  But when the Footloose Forester said that he actually stepped on the head of a rattlesnake, some people might take that as a pure exaggeration. Rattlesnakes in the beautiful redwood forests? Yes, a freeze-frame memory that seems unbelievable.  He sought adventure and he sometimes found it in places that were unexpected.  But he really didn’t want to step on that rattlesnake as he bound down a steep hill.  That episode is described in one of his other chronicles.

The shark hunting episode with a former Belgian paratrooper was an adventure that had to be planned. But Pierre was like Dave Noni, and he sensed that he had met a fellow adventurer in the Footloose Forester, so we planned a shark hunting expedition on the very first day we met on Sal Island in the Cape Verde Archipelago of volcanic islands. The shark we eventually hauled in took about 20 minutes to land, with the aid of five people pulling on a stout rope that Pierre rigged for shark fishing. 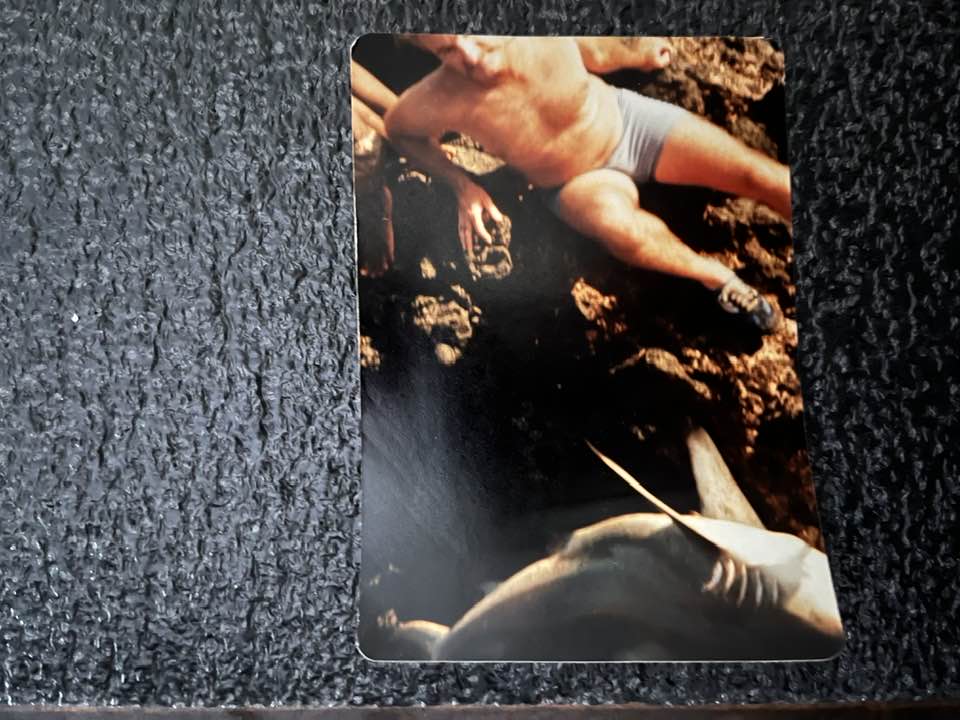 That was the closest that the Footloose Forester ever got to a large swimming shark*.  It appeared just a few feet behind the Footloose Forester who was still in the water with the net bag of speared fish we had just taken as bait.  The Footloose Forester managed to reach up and haul himself out of the water and unto a flat rock, just a few seconds before the shark could snatch the bag of fish from his hands.  An unbelievable tale, but another one of the freeze-frame variety, and another chronicle, with a photo of a 150-pound shark lying limply on the rough lava rocks where that memory was born.

* Upon recollection, the Footloose Forester recalls wading in shallow water in the Gulf of Arabia, off the coast of Pakistan, when a half-dozen sand sharks swam by.  They were not interested in him, and he was amused at their arrival.