The Athabasca Glacier, located in Jasper National Park of Alberta, Canada is an example of a mountain glacier. Mountain glaciers typically form at the downslope foot of steep ridges and then extend into lower elevations by gravity, with their load of snow and ice.  The shape of the cavity into which glaciers form is often a concave semi-circle, the most efficient shape at collecting dislodged snow from both right and left sides above, and amassing it into a finger-like line of an incipient glacier. Although most mountain glaciers are found near the tops of high mountains and may develop only limited mass, thus may be referred to as hanging glaciers, the aspect or exposure in the terrain itself favors the formation of glaciers in some places, but not in others.  That is to say, even in regions of high peaks and moderately deep annual snowfalls, most glaciers in North America can be found in concave bowls on the northern slopes; or in adequately deep concavities high up on the NE or NW slopes.

On the contrary, few glaciers are sustainable on the warmer southern exposures; or where the form of the mountain faces do not favor retaining snow packs.  A careful study of high mountain peaks (on maps or aerial photos) in various states of the USA will show that there are, or were, literally hundreds of small named glaciers that have previously been identified.

Needless to say, most mountain glaciers are found in high latitudes where there are typically low temperatures; or where high elevation leads to a lower annual temperature. Even sunny California has a few mountains where glaciers still exist, but at places where the summertime temperatures are sufficiently low to keep some of the ice and snow from melting.

The first glacier that the Footloose Forester ever visited was just below the 10,000-foot elevation of Pyramid Peak in El Dorado County.  At that time in mid-summer, the only snow left near the summit was a small patch in the protected cove in the NE quadrant; and the larger expanse of snowpack in the small glacier on the NW side. Over the years, the few other glaciers he visited in the USA and Europe held snow and ice high up on NE and NW slopes. The largest of the three glaciers on Mount Kilimanjaro in Tanzania has a wall of ice that is about 300 feet high. In the Southern Hemisphere, one would expect to find mountain glaciers in similar microsites on the SE and SW exposures.

This chronicle was intended to explain how glaciers form and move by gravity.  In the picture of the Athabasca Glacier above, notice how a thick pack of snow completely covers the top of the rocky lower ridge on the left but does not cover the lower ridge on the right.  One can expect that the ridge on the left will experience shearing and scouring on the surface as the snowpack moves toward the valley below. Only the sides of the ridge on the right will feel the weight and the pressures of the snowpack; at least during the present-day circumstances. In times of deeper snowfall, both ridge lines may be affected.  When it comes to the long ago continental glaciers of the last ice age, however, the effects of rock scouring and the shearing of valley walls were much more pronounced.

During the last ice age, massive fingers of ice and snow thousands of feet in thickness moved southward across North America. Perhaps the predominant physical force was ice because it accumulated in the lower depths of the glacial bodies. Annual snowfall contributed to the depth of the glaciers, but the snow that did not melt and evaporate each summer season instead melted in situ and percolated into the lower depths of the glaciers where it added to its ice core. Relatively cold temperatures tended to keep the glaciers in place; but relatively warmer temperatures favored the migration of glaciers, as warm contact zones between the unglaciated areas downstream influenced the melting of ice at their interfaces. It was like watching a stick of butter slowly slide down a warmed baking dish. Due to the crushing forces of the thick glacial mass, however, entire valleys were scoured and shaped into the modern landscapes we now take for granted.

A striking example of a large glacier found in the Southern Hemisphere is one from Patagonia, as shown below.  Notice how thick the ice is upstream, but how the forward movement can be marked to an exact spot on the ground.  The tunnel under the ice shows how the present-day flow of the intersecting river interrupts the movement of the glacier at the ground surface, but due to the thickness of the ice mass, the glacier continues to advance despite the melting action of fresh water.  Such dissolution of ice and snow in centuries past probably carved other similar glaciers in the region, but also played a role in dispersing stones and boulders carried by the glacier from one source and re-deposited them in other locations.  In this case, re-deposited stones and other debris transported from one source will become the fresh parent material of the ground matrix in geographic loci that are perpendicular to the natural flow channels of the glacier from which there were historical passengers. 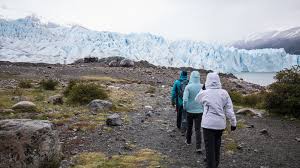 In the photo below, it can be seen that fresh meltwater is a prominent feature at the leading edges of glaciers.  Depending on the thickness of the ice mass and the gradient in the terrain, the action of the flowing water can be a force quite independent of the main body of the glacier, itself.  That is to say, erosion and subsequent shaping of the land surfaces in advance of the glacier, itself, are important aspects in the sculpturing of landscapes in the vicinity of glacial bodies.  With respect to continental glaciers of eons past, we can only speculate how greatly the land was altered. 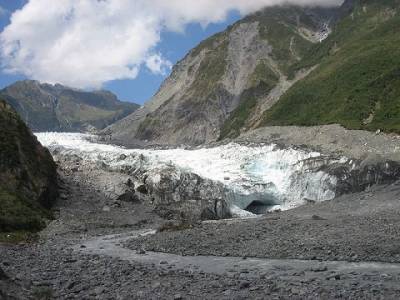 The terminal moraine of the Fox Glacier in New Zealand

Although glaciers appear to be composed mostly of snow, with falling snow as the chief mechanism of loading, the vast majority of glacial bodies are transmutations of snow into ice.  A close inspection of glacial profiles will show, however, that the denseness and purity of various ice layers vary according to previous epochs of snow events and the intervening warming periods.  Some glaciologists specialize in determining the age of glaciers by inspecting individual layers for their composition of trapped gases and associated transported materials.