My Time at Parris Island

When I became eligible for the World War II draft, I was declassified from 1A to 1B because I was married. The war had ended and soon the Korean war started, and for the same reason I was ineligible. I was married with children.

When our sons became of draft age, the Viet-Nam war began. We were not really concerned because it didn’t sound too serious. Most of us thought it would end in a very short time. The draft was a lottery in alphabetical order, making the name 'Cormier' one of the first to be called.

Jim only had one eye, making him ineligible. Tom decided along with his friend to enlist in the Marines. For young parents at this time things were very confusing. Many of these young men were faced with the drug scene and dysfunctional homes. Most of these children had veterans of WW2 for fathers who were adjusting to civilian life. That caused many divorces and dysfunctional homes. Many were faced with the choices of, 'join the military or go to jail'.

I don’t believe we had either one of these problems but Tom had no trouble making lots of friends. One in particular was Bob Gay. I knew the parents of Bob and they lived a completely different life than we did. Tom sometimes spent overnights and weekends with the Gay family. Camping was often their pleasure. Camping is where you spend the least time with your children. Mostly it is 'go play with the other kids while we socialize with our similar friends”. Tom was not in harm’s way but he was not with us and his siblings.

If most of us parents ever thought at that time that this Viet Nam War was going to be that bad, we would have tried to convince Tom to join the Coast Guard or anything else.

Lillian and I drove Tom to Logan airport. We were waiting for them to start boarding and I suggested we go into the airport chapel and keep to oneself quietly for a few minutes. I gave Tom the few dollars I had on me, then watched him go down the ramp to board the flight to Parris Island.

Weeks went by, and of course Tom could not communicate with us, which we understood. After a few weeks Tom notified us that his platoon was to graduate basic training. I don’t remember who stayed with our family while Lillian and I traveled from Natick, Ma. to Rhode Island, Conn., NJ., Del., to Md., VA., N.C., to S.C., to Paris Island.

We were directed where to park the car and where to sit through the ceremony. We had an excellent place to sit in the front and Tom was in front of his group. We had not seen Tom since the airport. We did not recognize him because he was trim and stood so straight and forward at attention with all the other recruits. Being at attention I suppose they must look forward only. For a moment it seemed like Tom didn’t want to see us. All the more reason why we didn’t recognize our son.

After the ceremony we joined Tom and the group for a lunch. Tom introduced his drill instructor to us and I shook his hand, and I could feel the hardness in his handshake. We learned later how hard they really were. We were leaving Paris Island, never to return I hoped. With more sons of ours growing up we were fortunate that way.

Away from the ceremony area there were war machines not usable. I got up in them just to feel what it is like to be in them.

Lillian and I thanked God many times that Tom’s name did not appear on that Granite Wall in Washington DC. When the Wall memorial was first shown with all the names engraved on the wall of the fallen of the Viet Nam War, we were there with Tom & Chris, not a dry eye anywhere in the crowd! 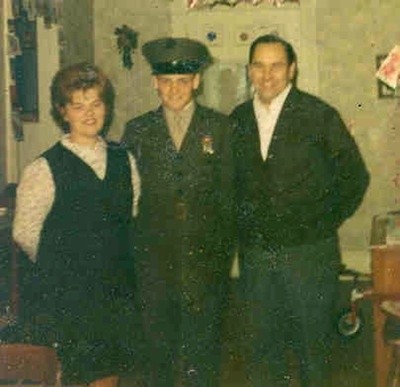 After being discharged from the Marines Tom was welcomed at home by all his siblings and us forever. This story began with a lack of Tom’s company at home and his time away at war.  Tom gets married, leaves the nest for good and it is good.

Tom worked for me a little and soon made his way with many ventures. I can truly say that I spent more quality time with Tom than anybody else in my lifetime other than Lillian of course. We shared philosophies, we made music, we constructed, we golfed, fished, we traveled abroad, I worked in Tom’s wood carved sign business, we entertained, and we lived in a golf resort together. Tom brought us a 4th daughter, Chris, and together they brought us our 1st grandson, then another one. We relocated from NH to TN, and always lived close and still do.

I always thought I made a home that had all the pleasures of life like camping & games. I would not have ever seen Parris Island, North Conway NH's beauty, most of Tennessee, the Carolinas, Mexico, Europe, so many golf courses in Bermuda, Virginia, the Carolinas, few days stay in Manhattan NY, The World series in Atlanta, a tour of Boston, Grand Old Opry in Nashville, Long Boat Key, FL and more.

If it wasn’t for Tom & Chris we would be nobodies. Now look at us. We have a veteran among us and we, meaning all who know him, are proud of TOM.

We are so thankful and may God bless you and Chris.

I received this letter from you on Veterans Day, which made my day, month, year and life with your wonderful words. I'm the luckiest man who ever lived and you and Mum are the furthest thing from 'nobodies'. You are the highest example of integrity and honesty, which cannot be matched by anyone I know or that the world has ever known. I love both you and Mum beyond even these words. Thank you for this gift!

I received this letter from you on Veterans Day, which made my day, month, year and life with your wonderful words. I'm the luckiest man who ever lived and you and Mum are the furthest thing from 'nobodies'. You are the highest example of integrity and honesty, which cannot be matched by anyone I know or that the world has ever known. I love both you and Mum beyond even these words. Thank you for this gift!
Cancel Update Comment

Please know, Mr. Cormier, that Tom has impressed and inspired me more than anyone else I met in the past 20-30 years. Call it chemistry, but I like what I have seen. Yes, his stories about Viet Nam made me cry because they were heart-wrenching.

Please know, Mr. Cormier, that Tom has impressed and inspired me more than anyone else I met in the past 20-30 years. Call it chemistry, but I like what I have seen. Yes, his stories about Viet Nam made me cry because they were heart-wrenching.
Cancel Update Comment
Follow