On the road...again!!!
Essays, Stories, Adventures, Dreams
Chronicles of a Footloose Forester
By Dick Pellek

A landlubber like the Footloose Forester always felt at home with the sound of granite sand under his boots, the firm landings of his bare feet in beach sand, and the whistle of the wind as he drove into another sunrise.  On the road…again!!! was always going to be his favorite masthead but, looking back, there were other ways that he got around.  There were a few boats in his memory banks.

The first adventures in boats were as a fishing companion to his father who was a hard-core fisherman, summer and winter.  We rented rowboats from time to time on Lake Musconetcong and shared other rowboats on fishing expeditions with friends on Lake Hopatcong.  The young Footloose Forester was also permitted to rent rowboats on his own.  In those growing-up years, nobody thought it was out of place for a young teenager to plunk down his allowance money to go rent a rowboat.

There were a few adventures with canoes, but fewer canoes for rent.  Some kids didn’t feel very comfortable in them because they were easy to tip over and if you didn’t have a buddy to balance out the weight in the bow, steering an aluminum canoe in a stiff wind was a tactical challenge.  And although the one-man punt that Phil Garlick let him use one time was sort of a cross between a rowboat and a canoe, the lapping waves of springtime managed to swamp him into the drink.  Poor Phil didn’t see his punt again for many months as the wind swept it away to the vicinity of Port Morris.

The unexpected nostalgic reverie about boats inevitably brought forth a few mental scenes of being in dugout canoes in Central America and in Indonesia.  Travel by boat is so important in many rural areas that it was expected that there would be other boats of all sizes and descriptions.

A couple that the Footloose Forester remembers were propelled by a long pole, some rowboats had only one paddle, and some canoes had oars.  Oars for rowboats? and paddles for canoes? Sometimes it is best to abandon conventional wisdom. He was especially fond of the dugout canoes because each and every one of them was crafted by hand. Belize had the most beautiful ones but inland Africa probably had the most. 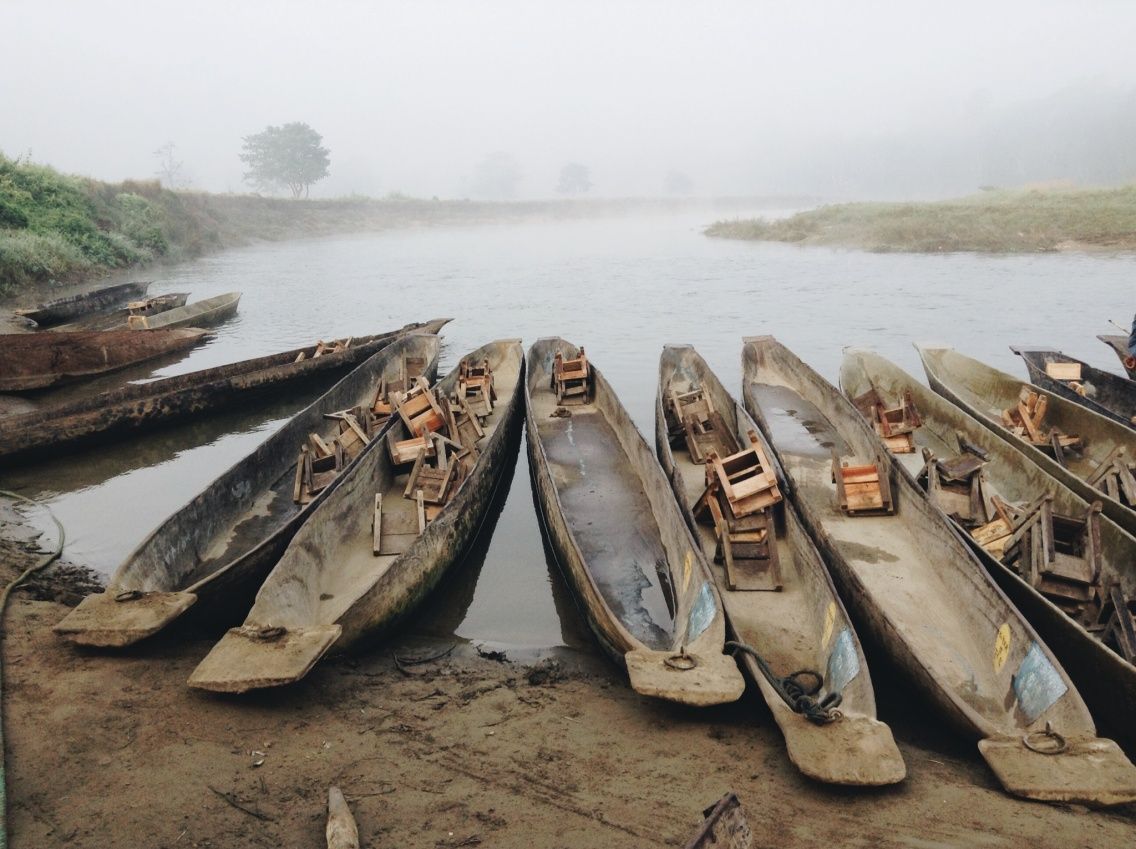 The fishing boats along the Mekong River in Thailand, Laos, Cambodia, and Viet Nam were somewhat larger than the Footloose Forester was expecting, but the commercial fishing community invested in boats that had sufficient storage capacity to make the venture worthwhile; besides, the handheld and gas-fed motors were easy to transport and manage.  The motor was traditionally at the end of a 6–7-foot shaft that the operator dipped into the water.

Getting back and forth in Ujung Kulon in Indonesia was strictly by boat.  Since Ujung Kulon National Park was managed by the government, the authorities had a couple of boats to make the voyage from Labuan Barat, the home port.   Mostly, it was the Badak (Indonesian for rhino), an in-board craft that they depended on for carrying supplies.  It could make the trip over open water to the interior of Ujung Kulon in about 3 hours, if the seas were calm.  Otherwise, in rough weather, the trip took about 8 hours by hugging the coastline.  The park guards used large rowboats, powered by an outboard engine, to conduct their rounds and official duties.  They were allowed to use them for fishing, as well, since fish and rice were the main items in their meager diet.  Fishing was great because the region was remote and it was protected from commercial fishermen by virtue of its designation as a national park.  But that was back in the 1970s, and things may have changed.

From time to time, the Footloose Forester enjoyed the relative luxuries of sturdy pleasure boats, to cruise slowly in a catamaran in the waning Hawaiian sunset, or to fish for wahoo and barracuda off the coast of Key West, Florida.  But for the most part, he remembers most clearly the risks and dangers of dugouts in rapidly flowing rivers in Costa Rica and Venezuela.

There were even a few warships, thanks to his status as part of the extended diplomatic community.  Standing on the deck of the Russian cruiser Gorky in the Port of Praia, Cape Verde was one thing, but steaming between islands at 25 knots on the Fast Frigate USS Talbot was exhilarating.  At the opposite end of the size spectrum, he also remembers the long, 9-day passage to Bremerhaven, Germany on the 800-foot-long troopship, the USS Darby.  At fate would have it, he was destined to return from Germany after the completion of his military service—on another troopship, and it was the final voyage of the USS Darby.

The Katzenjammer Twins Lived In Venezuela