The Switzerland of Central America is known as the country that has the most stable democracy in Latin America. Costa Rica is also a magnet for studies in tropical ecology, whether one is interested in dry forests or wet forests. Even rain forests. Footloose Forester had the opportunity to visit Costa Rica at the outset of his “career” in tropical forestry which got underway at the University of Florida. Part of the attraction came in an American Forests article by Dean Tchirley of Syracuse University Forestry School. In the early 1970s he wrote that some 25,000 tropical foresters were needed. Since the Footloose Forester was enrolled in the University of Florida, School of Forestry with just that objective in mind, it seemed like a natural step for an aspiring tropical forester. So he set about applying for acceptance in a program that would get him into the tropics.

The Organization for Tropical Studies was that organization. Now in its 65nd year, OTS is a prime supporter for students intending to specialize in tropical studies. Costa Rica is a prime venue. There are several strong memories the Footloose Forester has about his two sojourns to Costa Rica. One is a snake story. Everybody loves to hear a snake story, and Footloose Forester has quite a few. 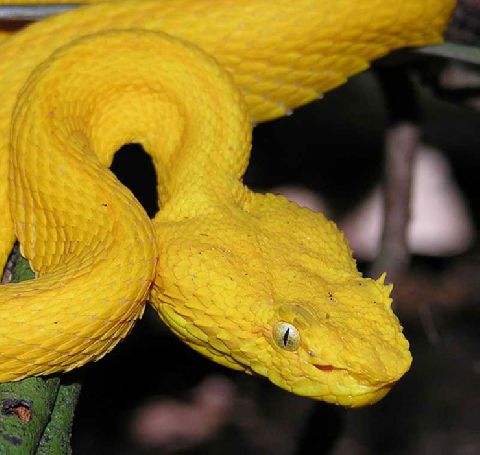 During our group orientation on the campus of the University of Costa Rica, our small band of a dozen graduate students were instructed about the perils that awaited us in the jungle. One of the worst was the pugnacious fer-de-lance, a large, fast and aggressive viper with about a gallon of venom in the sacs above his huge fangs. Mr. fer-de-lance was allowed out of his cage by his expert herpetologist handler, and proceeded to show us how fast he could slither across the lawn toward us. There were others snakes, in turn, so we could see what they looked like in the grass, and how they acted when set free. One of the last was the one he remembers the best--the tiny, docile Bothriechis schelegii. He remembered the scientific name just as clearly as he remembers where he was when the announcement of the shooting of JFK came over the radio. But like so many things in scientific nomenclature, its original name has been changed from Bothrops schelegii to its present name.

This pretty eye-lash viper was said to be rather timid, so we wouldn’t have to worry about him. So he didn’t worry. But when he saw him in the forest, he thought he had to have a closer look. As he drew closer to get a closer look at the viper as he perched on a broad plantain leaf, Footloose Forester parted the vegetation with the point of his machete. Just as he came within arm’s reach, Mr. Bothriechis schelegii turned and struck at Footloose. In a flash, he struck back with the machete and cut the snake in half, in mid-air. Then it was all over. A docile little green and yellow snake stays forever in the mental folder of snapshots of his jungle diary. Just in case you are wondering, the eye-lash viper is one venomous species that comes in a variety of colors; green, orange and yellow.