Mrs. Anna Quinn was old and frail. We youngsters who lived on Church Street in Netcong, New Jersey remember her as tiny and wrinkled; and she walked slowly and deliberately.  Maybe she was 85, maybe 90. But she was a sweetheart.  She was always kind and considerate. Mrs. Quinn lived alone in a large house up at the top of Church Street, not far from where we lived, but far enough away that we could not see her house up the hill, just before the street bent right and ended at the gate where Caesar Passanante lived. We felt welcome there, anytime...summer or winter.  She often asked one of us kids to fetch her a bucket of coal from her shed; or to run to the store for a loaf or bread, but she always offered us a dime in payment. She was a proud woman and I always accepted it.  It was a privilege to know that I was one of her favorites.  And so was my sister, Mary.  She reminded me of that when we visited her home in Tennessee, some six years after this chronicle was written.

The “we” in this memory of growing up was the small gang of kids all about the same age; boys and girls who might have gone to different grammar schools and even different high schools; but we all lived on Church Street and we identified ourselves as the Pigeon Hill Gang.  Yes, Church Street was on a hill and Quinn’s Hill was at the very top from where everything else flowed down hill. That was the reason we were keen to start on top of Quinn’s Hill with our sleds and go all the way to the bottom of the run on Church Street where it met Route 46. It was a dangerous proposition to sled all the way down Church Street because Route 46 had a lot of traffic.

In those days there was a lot more snow in the winter, but it took a heavy snowfall and other circumstances to make the run from Quinn’s Hill all the way to the bottom of the hill.  First of all, it had to be deep enough to minimize the drag under the sleds’ runners to be able to clear the lower edge of Mrs. Quinn’s property and then hit the hard road surface of Church Street. Next, there had to be enough packed snow that was not yet melted; to allow for continuous momentum unto and down Church Street. Often the snow formed in bands, as whipping winds cleared it from some places and mounded it in other places.  Also, if the snow was too soft, there was too much friction even when we got as far as Church Street.  Auto traffic on the road helped to pack the snow and make it a faster surface for sleds. That is, if the snow plows didn’t get there first and scrape most of it away. Or, if the plows didn’t lay down broad bands of sand.  Although we tried to steer away from the sanded road, the sand itself slowed our sleds or stopped them completely.  So, we kids were always on the lookout for the right conditions to sled down Church Street as far as we could. And it didn’t get any better than when we knew we could start at Quinn’s Hill. 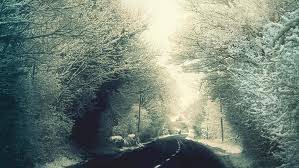 The greatest sledding challenge came when my father came home one day with a bobsled, complete with a steering wheel taken from an automobile. We three oldest boys could all fit, sitting upright on the sled, thus adding to the momentum once we got started.  Ronnie was the oldest by two years, and Joe was a year older than me. But none of us were older than nine or ten, so it took a lot of trust for my father to let us to sled down Church Street in the deep snow brought about by the occasional blizzard. There was even enough room on the bobsled for a fourth person, and someone from the Pigeon Hill Gang was always around. Even more momentum and less friction. It was usually Hank Shubert, who lived only two doors up the street. Perhaps he can verify for me the details about the ultimate bobsled runs we made, maybe 63-64 years ago. But it was my sister Mary who confirmed the circumstances, because she was one of us who made those glorious runs down Quinn's Hill and across the highway.

The snow was so deep from a previous snowstorm that not even the snow plows could clear it all. What was left got packed down for the entire length of Church Street. Yes, the roads were sanded in the interim; but additional snowfalls blanketed the sanded layers to form a sandwich of packed snow. When the next heavy snowfall came, it made for a slippery surface with plenty of base. There was little or no traffic moving, even on Route 46.  We were ready to make our move. Starting on top of Quinn’s Hill and moving continuously unto and down Church Street we waived off thoughts of stopping at our regular bailout point at the bottom, at the intersection with Route 46. Our spotter was standing on the other side of the highway and signaled that we could shoot across without stopping. That was the day our bobsled made its longest run, across Route 46 unto Church Street Extension; and all the way to the brow of the hill overlooking the railroad tracks.

A Story Only One Person Can Tell

Thanks, Golden. Memories were packed away in snippets and it was satisfying to finally link then together into a story.

Thanks, Golden. Memories were packed away in snippets and it was satisfying to finally link then together into a story.
Cancel Update Comment
Follow