Geography of the Past

If it is true that a picture is worth 10,000 words, then the catalog of satellite photos in the archives of the Footloose Forester could develop into a longish travelogue. There is no doubt that just seeing a few photos starts the engine of imagination, and was one of the main tools that he used in order to make some limited sense of his travels. Unfortunately, his memory of most places is too dim to capture very many stories in detail; on the other hand, some places around the world were so clear in his mind that he was able to reconstruct a few stories by reliving the passages, a few meters at a time. With the aid of the computer program called Google Earth, he is still able to tell a story or two in virtual space, by advancing the cursor from one place to another within a computer flight simulator.  In fact, one is able to begin a flight along a selected route and move in any direction, pause, look around, and then proceed. The places are real, but they are dated.

Creating an archive is one thing, but putting the photos on the monitor screen and then spinning a tale related to the photo is quite another task. It requires an interactive process that very few readers would relish doing on a routine basis. Just as photos from a camera are highly personal and might mean very little to others except for the picture taker, the associated satellite photos from past adventures of the Footloose Forester cannot stimulate much enthusiasm from others, except if they can relate personally with the subject of the photo or photos.  But rather than to discourage anyone from exploring the subject of various photos, it would be helpful to mention that many of the attributes of modern satellite photos, as used with the toolbox of applications that have been developed for computer users, he might get the attention of anyone interested in adapting the techniques to see for themselves if some of the various techniques might be applied to their own circumstances.  Some examples might help.

One of his favorite applications is using the flight simulator in Google Earth to take a virtual flight entirely around the symmetrical cone of a volcano in El Salvador. The volcano is named Volcan Izalco and it can be found in the suite of Google Earth maps or photos at Latitude N13◦ 48′ 46.66″ and Longitude W89◦ 37′ 51.24″.  The particular suite of photos in that series that makes the virtual flight so real is helped and enhanced by the absence of cloud cover in the area; and the knowledge that the photo resolution in that particular suite is so precise that the viewer can spot exactly where the main trail leads to the top, and see the exact spot on the ground where two lonely pine trees are growing on an otherwise bald cinder cone.  If he had not first seen those small pine trees himself when he stood there more than a decade ago, the Footloose Forester would himself not relate to the exact spots on the photos. Since there is virtually no other vegetation on the slopes of Volcan Izalco, the presence of the two small pine trees raises a number of questions of ecological and botanical interest. It should be mentioned, however, that not all photo suites in Google Earth are so good.  Persistent cloud cover in high mountains does not lend itself to clear photos; or to any photos, at all.

One other exercise with satellite photos in Google Earth is both a source of entertainment and a practical application of the many possibilities of high-resolution photos. As a sometime hang glider and/or paraglider pilot, the Footloose Forester confirmed for himself that it is possible to glide from the rim of another volcano in Cape Verde and land on the beach a few miles away. Hang glider or paraglider pilots know that it is easy enough to launch from a hillside almost anywhere, but having a flight plan that includes a safe landing place is crucial. The information found on the photo suite pertaining to the volcano called Fogo, on the island of the same name, lets you know at a glance the best place along the volcano’s rim to launch; the data at the bottom of the photo tells you the starting altitude for the glide; shows you the best flight path; and the locations of any ground obstacles such as towers and telephone lines along that flight path. Such notes as part of the planning process are also essential, just in case the pilot loses too much altitude in flight. Whereas different hang glider models have different glide ratios (horizontal distance covered divided by altitude change) capabilities, it is vitally important to also know what flight paths would not be possible to use in reaching the beach or other safe landing areas.  By the way, the terrain on the volcanic island of Fogo is so steep in most places, that flying a hang glider or paraglider, at all, is entirely ruled out because there are no safe landing places. 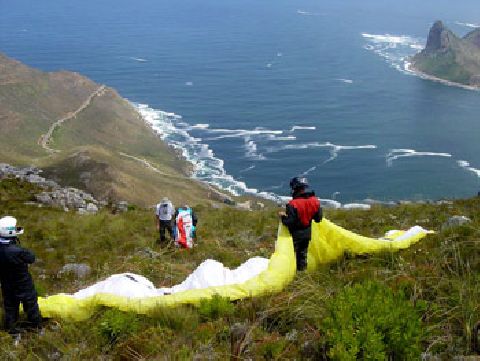 At this stage, anyone curious enough to check it out can confirm or dispute these assumptions by putting themselves on the rim of Fogo at Latitude N14◦ 56′ 19.95″ and Longitude W24◦ 26′ 04.50″. As enabled with inter-station dialogue via computer graphics, a collaboration between computer correspondents could also result in a better flight plan.

One of the most satisfying uses of satellite photos as archived by the technicians at Google Earth is the classical before-after comparison.  Footloose Forester worked on a number of reservoir construction projects over the years, so I was also curious to know how things worked out.  In almost all instances his involvement was at the pre-construction phase and was concerned with potential environmental impacts if or when a dam site was constructed; and as the reservoir filled up behind the dam.  Before-after is much easier to explain when there is photographic evidence to back it up. His 2010 memoirs Afghanistan to Zambia: Chronicles of a Footloose Forester has half a dozen geographical references to work sites in Mali, Senegal, Indonesia, Haiti, Cape Verde, Venezuela, and elsewhere.  The possibilities of comparing before-after conditions still exist; thus the geographical coordinates are essential tools in any present or future comparisons of circumstances on the ground.

Among his favorite worksites and, by implication, some of his fondest memories were thousands of miles apart in terms of geography but closely linked in terms of photographic retrieval techniques built into computer programs. Only after 25 years did he learn that the La Veultosa dam in Venezuela (at N7◦ 45′ 6.14″ and W71◦ 27′ 55.45″) had been constructed as planned; and these days he can also see just how the Manantali Dam in Mali (at N13◦ 11′ 48.12″ and W10◦ 25′ 45.33″) looks in contrast to the surrounding desert.

When the Footloose Forester mentioned reliving the past a few meters at a time, he said so after retracing his path on his way to the top of the Zugspitze, the highest mountain in Germany.  Yes, virtually retracing his path by flying along the trail with the aid of the flight simulator sub-routine in Google Earth.  The sharp stones are there, the shadows between opposing faces are there, the ridgelines are there, and the drop-offs are there; all in archives that are so clear that it is easy to imagine being there again.  By rotating the scenes you are able to look up, look down and see back along the route from whence you came.

Of course, the Footloose Forester still pines for his boyhood days when he and his friends in Netcong, New Jersey played on top of huge glacially-deposited boulders near his house. An archived Google Earth satellite photo taken prior to 2005 will show a few of them at N40◦ 53′ 42.16″and W74◦ 42′ 34.08″ but subsequent photos show only a dozen or so boulders that were blasted, excavated, and moved aside.