The On the road…again!!! Chronicles of the Footloose Forester were tucked away in his mental notebook for many years.  Many came to light in a tale of adventure here, a Eureka moment there, an occasional historic event back when, and a feeble but personal anecdote when all else failed.  Watching more than his share of Gunsmoke re-runs on TV was justification enough to impel him to attempt his take on a short chronicle about Dodge City, Kansas.

He was On the road…again!!!, so to speak, during those impressionable years when thoughts of the wild west and wide-open spaces first beckoned him west of the Mississippi.  But riding into Dodge City was on the rails, not on the road.  During the previous year, his nationwide railroad pass took him through Omaha, Nebraska as one stop he remembers clearly because he chose to get off the train on a Sunday morning to attend the Roman Catholic Church that he could see from the train.  At that time, he was not worried about getting back on the train before it departed the station, because he rationalized that he if did not make it back at departure time, he would get the next train west.  It really was an adventure.

The following year, on his way to Montana, the Burlington Northern tracks went through Minneapolis, Minnesota and the Footloose Forester remembers getting propositioned by two gay guys.  EDIT: so it could not have been the Burlington Route through Dodge City, Kansas, as he reported in the first and unedited chronicle.  In his fuzzy memory were also the Union Pacific, and at some time it was the Central Pacific, and he traveled both east and west on the trains.  So he definitely got confused when he tried to reconstruct the routing and the railroad companies. On second thought, it could have been by car.  The Footloose Forester had driven across the USA at least 4 times during his 20s, and he does remember crossing from Kansas City, Missouri into Kansas City, Kansas on his way west.  In any case, he was anticipating another adventure and another item on his bucket list and Dodge City was going to be a talking point.  It must have been another Sunday arrival because he remembers attending Sunday morning services in Dodge City and duly noting the city in the front pages of his personal Missal.  That Missal was a simple way to recall all the places where he had attended Mass. Before it was lost forever when his Army duffel bag did not get transferred from Portland, Oregon some years later, that Missal listed 51 cities and towns where he had attended church. That included churches in Germany, France, and Italy.  Yes, Notre Dame in Paris and St. Peters Basilica in Rome were among the entries.  Travel itineraries had some important destinations and some colorful places.

Dodge City was, sorry to say, more disappointing than he was expecting.  He knew that it was on the Great Plains and he really did not expect to see buttes, mesas, or even colorful foothills and country scenes replete with cowboys in 10-gallon hats.  Dodge was at that time, in the late 1950s, a bustling modern but small city with nary a cowboy in sight.  The most distressing aspect was the tourist-trap strip along one of the major streets. 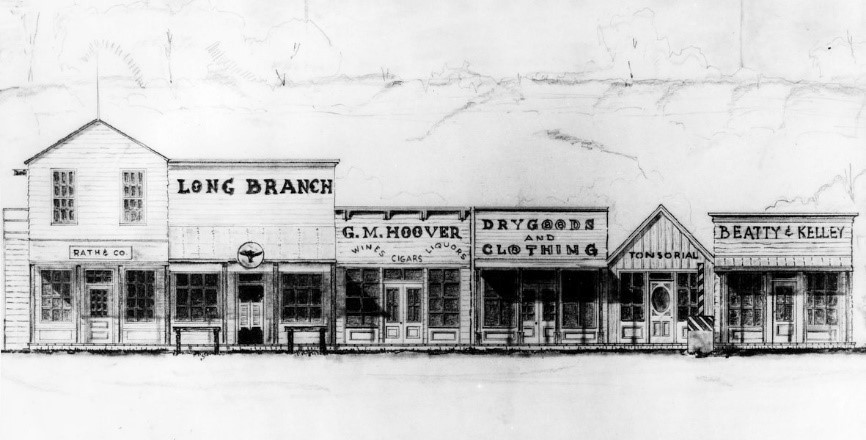 The Footloose Forester has always cringed at such gaudiness, no wonder that he had no intention of going into the Long Branch Saloon.  They were never going to sell western authenticity along that line of mini-mall mock-ups in the middle of town, and it was a sad attempt at trying.  It was no loss in just checking off that whistle-stop cow town on his bucket list and getting out of Dodge.  The Big Sky country of Montana was awaiting.