Sure, I’m Ignorant and Will Always Be

Criticism from afar can cut just as deeply as in-your-face histrionics, complete with sputum and the bulging eyes of the critic.  But being called ignorant was never a huge insult for me because the introspective citizen who calls himself the Footloose Forester has known throughout his life that he is ignorant and has paid attention to the many clues and reminders around him.

When he was a freshman in college, he used to take breaks in the stacks of the library where he studied.  It was a game to choose an aisle at random, to stop at so many paces and then without looking, reach for a book or journal that he planned to open, at random.  Without fail, as he started to read, he reminded himself that he was completely ignorant of the stuff on the page, any page.  Sure, it was a lesson in humility but people didn’t need to know.  You can do something about being ignorant, and the job is yours alone.  In the process, it is better to be humble about what you know and what you don’t know.  Some people just pretend to know. 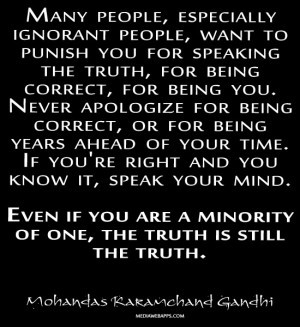 Thank you, Gandhi. I was ignorant about this quotation

Perhaps the best example he can remember about being ignorant was when he took mental notes about what he knew or thought he knew about chemistry, just as one subject on a long list of subjects.  A typical lumper in the world might give a response about one aspect or another of chemistry but the Footloose Forester did not know how to respond.  He knew how ignorant he was and how complex the world of chemistry is.

Why does the Footloose Forester choose to expose the soft underbelly of his own ignorance?  Frankly, it stems from recently being called ignorant. It may have been intended to be a knife jab in an ad hominem attack (appealing to feelings or prejudices rather than intellect) but it did not draw blood because the Footloose Forester has grown a thick enough skin to recognize ad hominem rants as the weapons of those who never come up with worthy counterpoints in dialogue.

Thanks to the Copy + Paste function, the Footloose Forester is able to borrow similar views he shared in another chronicle in 2014.  The edited excerpts are printed here, just as a check on the veracity of the presumptions.

This is likely to be the most personal, contentious, insulting, and embarrassing chronicle that the Footloose Forester has ever penned. It is all about my ignorance, your ignorance, and the general ignorance that pervades the very air we breathe.

[When asked about his relative ignorance about economics] President Eisenhower went on to say that people should not be ashamed to admit that they are ignorant; because we are all ignorant about some things.  Ignorance simply means that you are unaware of something. The word in no way suggests that being ignorant means that you are stupid.

As written in another chronicle, entitled “Schooling for Life”, the Footloose Forester described seeking a Masters degree at the University of Florida was a natural extension of his belief that he was woefully unprepared to speak and practice as a forester in the Third World, his choice as a career path. Rather than to project phony self-effacement when he told people he was ignorant, he just reminded them and himself that he and they were entirely ignorant of places they had never been, and of the languages and cultures that were awaiting them there.

On another occasion when he was giving a presentation at a forestry conference in Bamako, Mali, he let it slip about his relative ignorance regarding a policy or technical matter in Cape Verde.  One of the participants then asked if the Footloose Forester had ever worked overseas before.  To which he replied, yes; there was Pakistan, and Viet Nam, and Indonesia, and Costa Rica, and Panama, and Honduras, and Trinidad, and Senegal and … but he was still ignorant. He may have looked in the direction of the questioner with his response.

In retrospect, the Footloose Forester always took some delight in mentioning that in one way or another, we should not let our pride in our fancy degrees overshadow our utterly ignorant status as we attempt to cope with international development issues in places where we do not know the languages, the geography, the ecosystems, the politics, or the day-to-day struggles of the people.

Popular media sites give us the opportunity to express our ideas, or to share the ideas of others.  Posting them in prestigious places that allow you to add photos, maps, and graphs may seem to make one more informed than they really are.  When blended in with the researched findings of others, the personal comments of the person posting might seem to earn them the label of Expert.  Unfortunately, that presumption may be a nonsequitur.  The non-forester who recently posted an interesting article about tropical rainforests may or may not have firsthand knowledge about the things of which he speaks.  He wrote that there are only two types of rainforests, and then went on to publish three (3) world maps presumably showing the geographical areas where the two types occur.  Curiously, the third map, presumably a blended compilation of the two types he described, did not closely resemble the first two.  Hint: the third map showed Florida--all of it, as a rainforest zone.  Hence, a nonsequitur in the maps themselves.

This edited and updated chronicle has been expanded to remind the reader that the subject title was, Sure, I'm Ignorant and Always Will Be.  The Footloose Forester is largely ignorant about the vegetation in Central Africa and the Azamon Basin, so had to take his time with the maps and the presumed zones of rainforests.  His skepticism of the Quora discussion about rainforests impelled him to copy the article to his notepad and subsequently re-post parts of it below.  It may take some time to get the mechanics of copy + paste just right, given that another website with other navigating parameters is currently part of the process.

Some of the copied information:

How much of the world is rainforest?

Rainforests cover only 6% of the planet’s surface. [1]

We can see on the maps below how only a small portion of the planet benefit from their biological diversity. But before going into that, it is important to know that there are two types of rainforests: 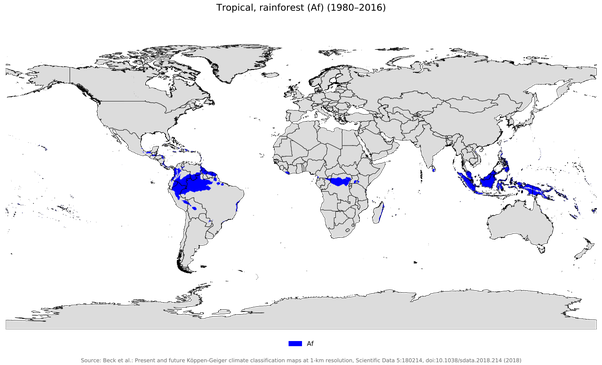 The first map shows only tropical rainforests, above

The unsubstantiated combined map (map #2) of temperate and tropical rainforests.  Note that it includes all of Florida and almost all of Zaire and Eastern China, among other major discrepancies.  Should we accept these maps as accurate?

The Footloose Forester admits to being ignorant about most of South America, Zaire, and China but...  But we should not take at face value all things that are presented to us, regardless of how fancy the medium of presentation is.

DikDik is (was) a millionaire