On the road…again!!!
Afghanistan to Zambia
Chronicles of a Footloose Forester

When a respondent to the Quora.com website explained why rainforests are so hot and so wet, the Footloose Forester was jolted into composing a rejoinder.  The contributor, an airline pilot and traveler, opined that rainforests are hot because there is very little air movement above and below the canopies of tropical forests; furthermore, that all rainforests are in tropical regions.  The Olympic National Park and temperate rainforest in the state of Washington is neither in the tropics nor is it particularly hot there.  A cynical and somewhat snarky Footloose Forester believes that rainforests are defined primarily by the amount and periodicity of annual rain falling on the forest.  Where in the world they are located is a secondary consideration.

The airline pilot cum Quora.com respondent further qualified his response to the question “why are rainforests so wet and hot?” with his observation that the heavy clay soils are relatively impenetrable to rainwater, thus the water must be diverted into rivers or form into ponds and swamps within the forest. That response, more than anything else, cried out for a rejoinder.  Hoping to not misquote or misrepresent his answer, the Footloose Forester does, however; wish to comment with a few specific clarifications to demonstrate that simple explanations should be avoided because the issue is very complex.  Since this chronicle may be updated in the future with additional relevant information, he is content to share his views with others now, with the understanding that there is much more to the subject matter that can be found in an expanded explanation. 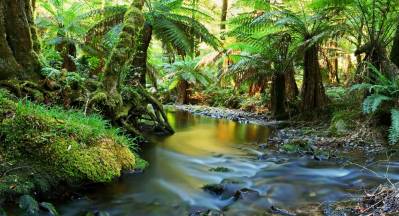 Not all tropical forests are rainforests.  Some are classified as dry, some as moist, some as wet, and some as rainforest.

In the very wet Ujung Kulon National Park of Indonesia, there is an anomalous landform that has soils derived from limestone and the resultant soil matrix that can be classified as silt or silty.  As regards progressively smaller soil particle sizes, silt comes after sand and before clay.  As a result, there are no visible signs of rainwater accumulation in the uplands that the Footloose Forester refers to as the Telanca Area.  Although the rainfall is within the same range as other areas of Ujung Kulon, neither is there evidence of impounded water in the channels that can be recognized as stream beds. Whatever water runs off the surrounding slopes and into the channels, the highly permeable soil profile quickly whisks it away.   Less than a kilometer away, a short 400-meter-long stream appears at the surface but it cannot be traced upstream beyond that flat stretch because it descends from the Telanca Area as an underground stream.  After a run of approximately 400 meters on level ground at the base of the Telanca “rise”, the stream again goes underground until it reaches sea-level at the inlet facing Peucang Island.

The point is, the geological landform derived from limestone that describes the Telanca Area weathers into silty soil so porous that there are no signs of surface water, even shortly after a rainfall. Furthermore, a sandstone shelf at the southern margin of peninsular Ujung Kulon weathers into sandy soils that are also decidedly dry in appearance.  The Footloose Forester measured only 25% moisture content in the soil there, after 10 consecutive days of rain. Many or even most people would describe the entirety of Ujung Kulon as a rainforest, but from a soil type classification basis, some areas are physiologically drier than others.

In the steep uplands of the Volcanoes Region of El Salvador, the porous silty soils there are derived from volcanic ash, and the soil moisture regime is decidedly dry, regardless of the rainfall in the immediate surroundings.  Occasional ground fires that occur there are exacerbated by the relative dryness of the soil surface as rainwater quickly percolates into the soil profile.  Some people might think of the thick forest there as rainforest, but the dynamics of water transport into and through the soil profile give such silty soils some characteristics that are unlike the putative clay soils further down the valley.  Soil cartographers can and do map the boundaries of such soil bodies in an effort to understand the nuances regarding the physiography of forests and agricultural lands.

The whole concept about what is and what is not a rainforest has never been conclusively defined.  Although there are a number of studies that suggest that high annual rainfall with relatively uniform distribution throughout the year is the hallmark of a rainforest, a minimum measure of rainfall is perhaps the best indicator to distinguish a moist forest from a wet forest, and a wet forest from a true rainforest. Alas, several studies, when viewed as a review of rainforest characteristics, imply that rainforest can occur with as little as 2500 mm of annual precipitation.  One of the more convincing schools of thought sets a minimum of 5000 mm annual rainfall as the lower limit, when located in a tropical latitude.  By that measure, there are very few places on earth where true rainforest occurs.  To the general public, the specifics of rainforest characteristics will continue to be ill-defined, hence our understanding of the ecology and dynamics of forest ecosystems will wander without the hint of elucidation until someone attempts to put the issue into a reasonable context.  The subject is definitely worthy of a major research venture.