The Wisconsin Glacier that pushed south into NE United States about 12,000 years ago left many unacknowledged gifts that are part of our everyday life today.  Geologists may quibble about how long the thick mass of ice and snow stayed around until it retreated into Canada or ultimately melted at its terminus, known as the terminal moraine.  But what is certain, the broad area covered by the massive glacier covered many US states and left behind a number of bi-products of its passage.  Drumlins, kames, eskers, rock drumlins, and kettle lakes are among the landforms that have been left as evidence of the presence and dynamics of the glacier’s movements; and they gave us bounteous gifts that we use every day.  Rock walls, corporate landscaping creations, sand and gravel for roads and general construction, lane barriers, and more, are all around those living in glaciated areas.  The kettle lakes are foci for recreational activities, particularly boating, fishing, and as sites that are valuable as vacation home properties.

On a bucket list trip to the Finger Lakes Region of New York, the Footloose Forester was eager to see a few of the hundreds, perhaps thousands of drumlins that formed as the Wisconsin Glacier continued its migration southward.  In quasi-technical terms, drumlins are, from the Irish word droimnín ("littlest ridge"), first recorded in 1833, in the classical sense is an elongated hill in the shape of an inverted spoon or half-buried egg formed by glacial ice acting on underlying unconsolidated till or ground moraine. Some drumlins are a mile long but most are considerably smaller. What makes them different is their distinctive shape in the landscape and the hidden trove of geological treasures that they hold.

Sand and gravel quarrying ventures looked for drumlins as sources of raw materials because many drumlins, once exposed to the surface, contained a mix of large and small stones, as well as sands that may not have been present in the in-situ soils prior to their passage.  The first photo below was taken up close at a quarried bank near Homer, New York.  An overview of the site can be seen on a Google Earth satellite photo at digital coordinates 42.657, -76.211. 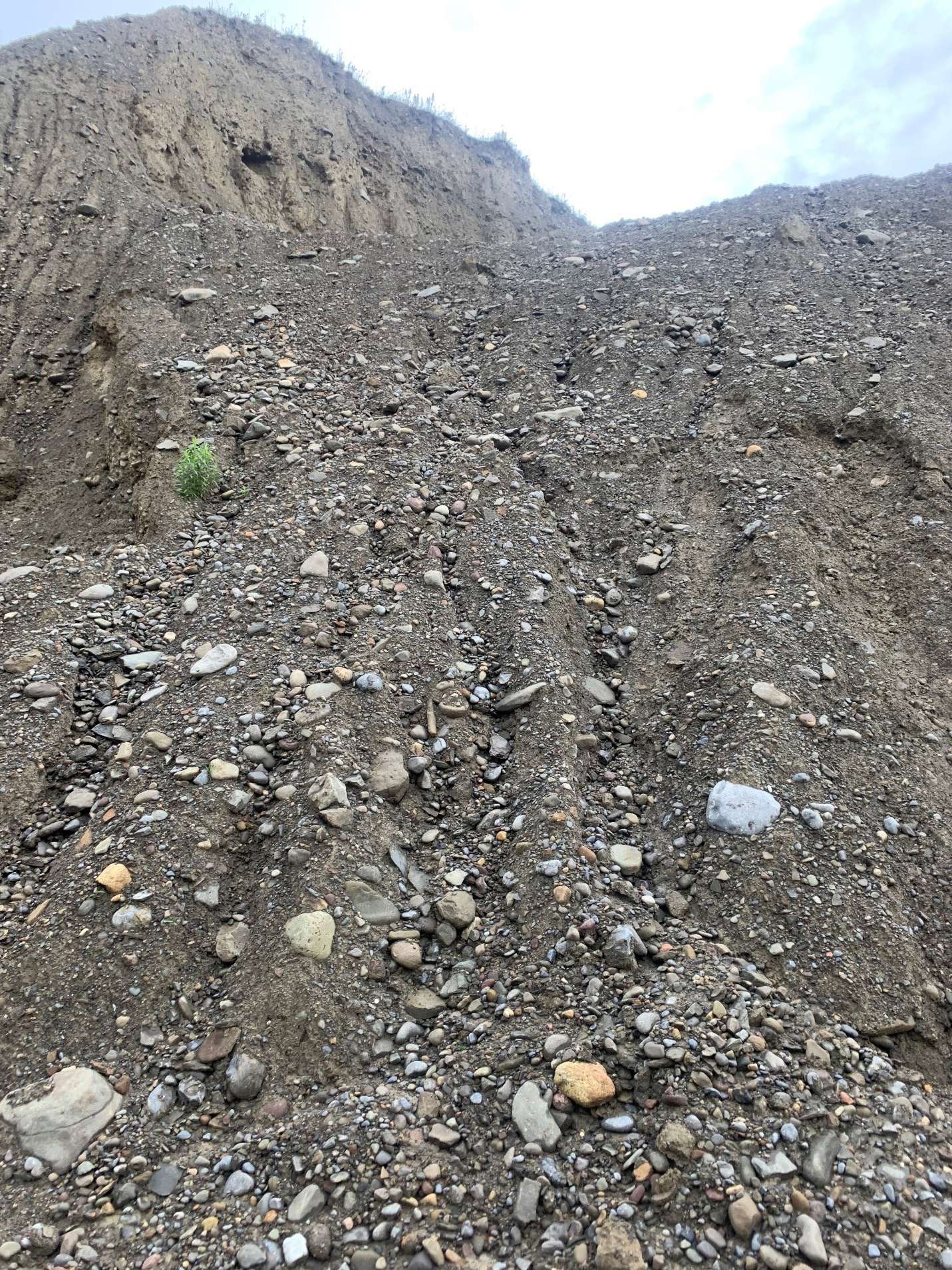 Up close photo of glacial till

The dissimilar colors and sizes of the materials are themselves intriguing. Needless to say, the moving glacier plucked various species of rock along the way, before depositing a trove of mixed materials.  In the second photo, one especially interesting specimen was part of that eroding bank of till. 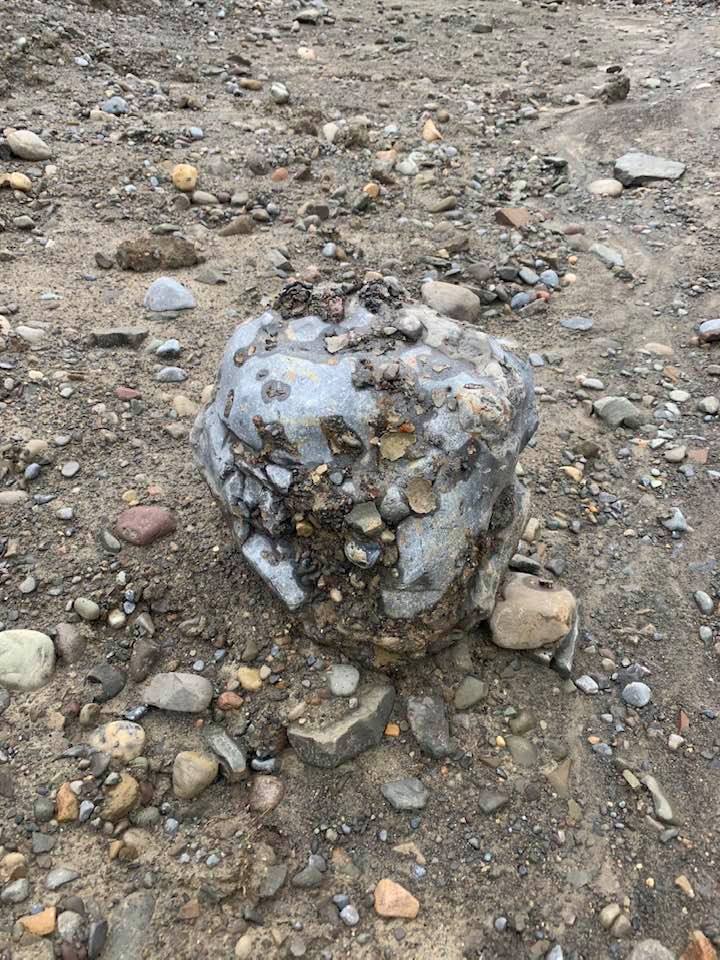 A block of conglomerate composed of several rock species

An overview of the quarry site in the third photo suggests that this unique resource will be providential for many decades to come. 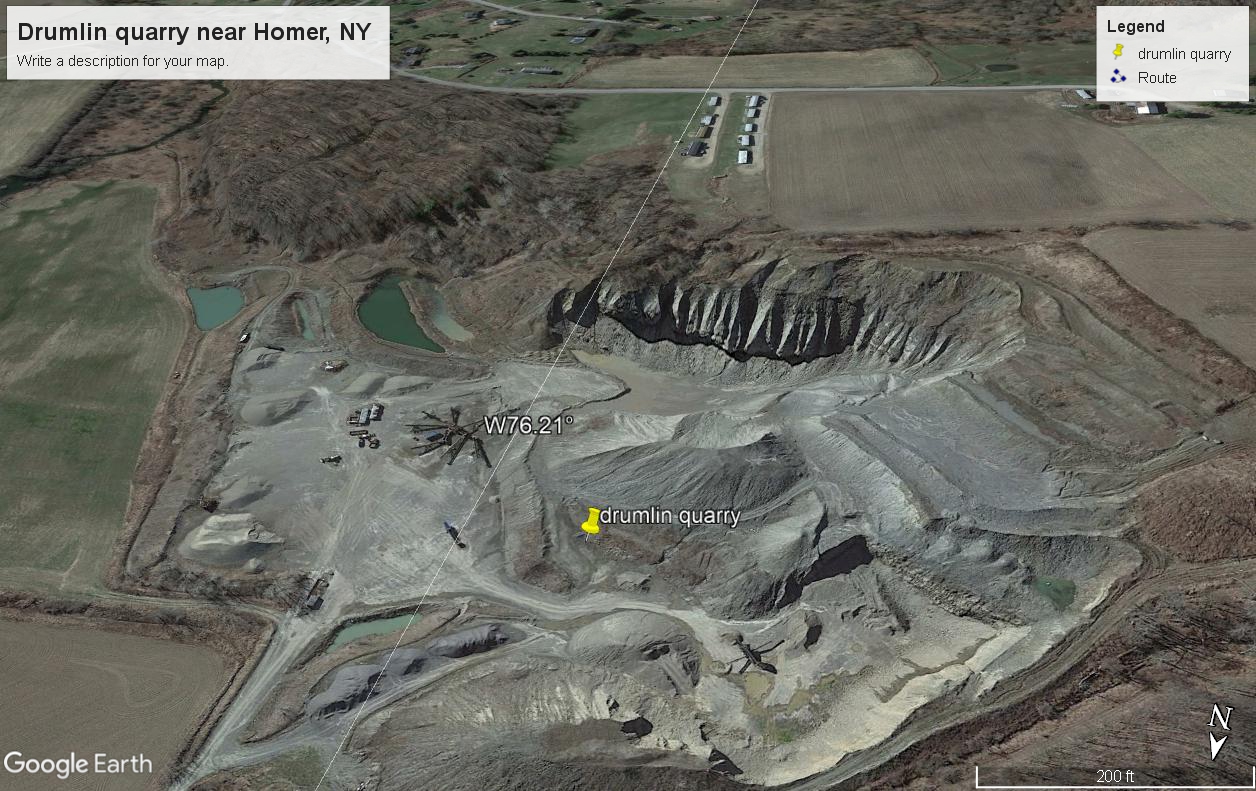 Part of the mystery about drumlins is why so many different species of rock are found within their mounds.  Drumlins occur in other states that were glaciated but only a few of them have been exploited for gravels and sand. Most appear to be covered by shrubs and trees in arable agricultural areas because it is likely that they were too difficult to cultivate with farm machinery.  The ones that are easiest to spot are farmed for hay and other pasture crops.

Even geologists have speculated about what was contained in and on the slowing advancing glaciers. Apparently, the richness of the ice load was greatly enhanced by plucking and incorporating in-situ ground materials and incorporating them into the lateral moraines of the glaciers as they moved. Such lateral moraines can be seen in present-day glaciers in Switzerland and elsewhere.

Another glacial landform that has been exploited for sand and gravel is an esker, a long snake-like mound that formed like rivers under the melting ice of the Wisconsin Glacier.  The Footloose Forester was privileged to do volunteer work on the backside of the Jacksville Esker in Butler County, Pennsylvania, and witnessed the quarrying operations nearby.  The quarry had the same kind of deposits of sand and gravels that were transported with the glacier itself, except that the Jacksville Esker was about two miles long.

Some Stuff You Just Can't Make Up