If you look very closely at the satellite photograph taken at latitude N 13°48' 47.7" and longitude W 89°37'51", you may detect two small pine trees growing on the steep slopes where there is virtually no other vegetation. Moving around the photograph with the aid of coordinate grids until you get the latitude and longitude exactly right might be time-consuming and a bit frustrating, but there is an easier and quicker way.  In the computer app named Google Earth, just type in the sequence 13.813254, -89.632492 and the same geospatial scene will appear. Using the latter number sequence is the modern and preferred way to apply digital map coordinates. Google Earth uses Boolean algebra to help you read any map on earth by simplifying geographical coordinates through the use of digital notation.  You may not need six decimal places to find what you are looking for, but the technology has made them available.  Usually, three decimal places will suffice.

The point of the belabored explanation about modern and updated geospatial coordinates is to validate the famous quote by philosopher Marshall McLuhan, “the medium is the message.” Said another way, a picture is worth 10,000 words. Anyone wanting to tell a story that includes photos can and should embellish the story to suit the objectives of telling the story in the first place. Whereas satellite photos are real-time depictions of realities on the ground, they tell a story of their own.  Furthermore, the before-after suite of Google Earth photos allows one to compare one story to another through time. 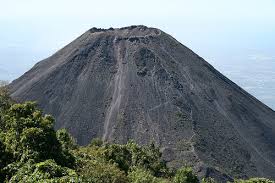 Climbing up the flanks of Izalco Volcano and down into the nascent caldera of this previously famous Lighthouse of the Pacific was an adventure never to be forgotten. The Footloose Forester was always looking for ways to work his personal treks into his business trips, and being in El Salvador had bonus coverage.  Other chronicles about volcanoes in general and those in El Salvador can be detected through the story tags in his personal blogs. Some adventures that were equally satisfying had to do with reservoirs and the before-after effects of the flooding river systems of which they were part. 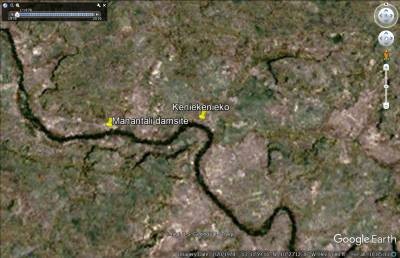 A sector of the Bafing River before reservoir impoundment

The pre-development phase of the formation of Lac de Selingue in West Africa was a multi-faceted adventure for the Footloose Forester.  He still relishes reading the story that is being written at 11.638013, -8.229536 (in the satellite photos of Google Earth).  There may also be a chronicle or two describing conditions on the ground, about sleeping in mud huts, about swimming in the Bafing River with hippos in plain sight, and other precious memories.  But the before-after events in the vicinity of the Manantali Dam and subsequently formed Lac de Selingue are best framed in the aerial photos on which the stories have been painted. The medium of the photos frames the stories within the borders of the photo suite.   If you look at a pre-construction photo of the Manantali Dam site, the photo above is what you would see.  That is what we saw in 1976.  The present-day appearance of the region is much different.