As he anticipates another 10,000-mile round trip sojourn to Hawaii to keep a promise to his deceased wife, the Footloose Forester is getting lost in memories about other places, other skies, and other times.  The world keeps turning and the markers of our personal histories that he thought would last forever--have not lasted.  Thus, the flashes of reverie and a bit of nostalgia.  On the road…again!!! will always be in his thoughts but the roads were mostly unnamed and unnumbered.  The friendly skies are another matter.

Those friendly skies once hosted BEA, the now-defunct British European Airways, a regional carrier that catered to air traffic in Western Europe. The even more expansive and international BOAC, the British Overseas Airline Corporation, is also now defunct. Undoubtedly, they morphed into something more profitable and more enduring in the present-day corporation known as British Airways.

The friendly skies still symbolize United Airlines under its enduring slogan, but those public skies also carried the roar of ghosts once known as Pa Am (Pan American), TWA (Trans World Airways, and Eastern Airlines, among others.  Ironically, the Footloose Forester carried durable plastic cards showing that he was a frequent flyer on many of them; but lost those presumably never-expiring miles he had logged on all of them.  It was a toss-up whether the most frequent flyer miles were on Pan Am or Eastern Airlines.  He had racked up at least 10,000 miles on each of them before he ever got to use any of the bonus miles.  Looking back, he does remember redeeming only one free flight on Delta Airlines, from Pittsburgh to Washington, D.C. and return.  Nostalgia may not count for much, but the Footloose Forester still has those durable frequent flyer cards from Pan Am and TWA.  Oh, in theory, he also has about 20,000 frequent flyer miles to his credit on American Airlines, but they have always found a way to get around honoring a single mile he has requested.

The friendly skies did produce plenty of nostalgic scenes over the years, one reason why the Footloose Forester tries not to forget important links to the past. Some of the flights were pleasant, comfortable, and short enough to be remembered fondly.  One of the bright memories was in a DeHavilland Comet flown by Air India. 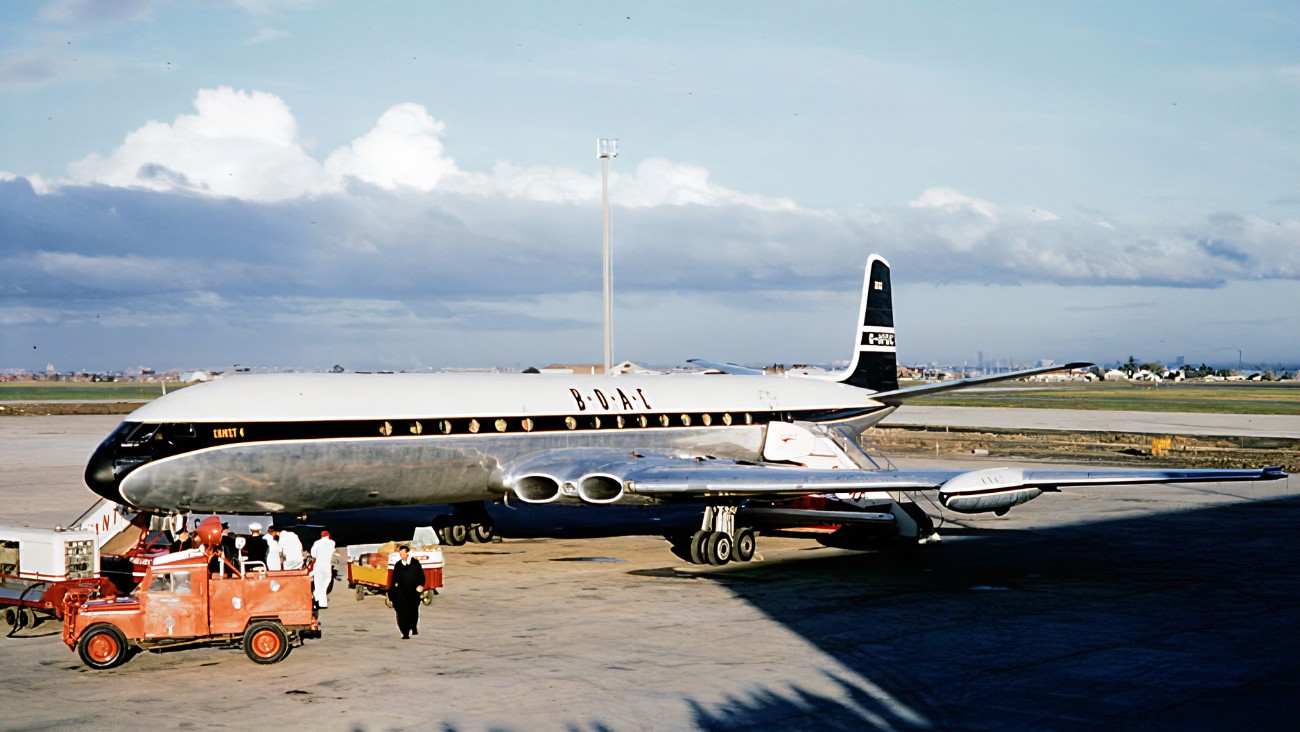 A DeHavilland Comet of the 1960s

He had always wanted to fly in The Concorde, the sleek, needle-nosed British-French classic destined to have a short history in the air.  But he was fortunate enough to see it take off and land a couple of times in Dakar, Senegal, and to see one or two on the ground at JFK in New York and at Charles DeGaulle in Paris.  The Footloose Forester was always on the lookout for that distinctive bird and he was not disappointed.

The many memories of being in the air are a natural result of being determined to see as much as possible. Thus it was, that the Grand Canyon, the Rock of Gibraltar, the White Cliffs of Dover and even flying close to Mt. Kilimanjaro became payoffs that were part of being attentive.  Some of the eye candy icons were even viewed from the tiny windows of military aircraft.  During the days when he was a soldier, he was fortunate enough to fly on a pass, in aircraft with the acronyms MATS, (the Military Air Transport System) or as MAC, (the Military Air Command) painted on their fuselages.  He remembers seeing the Rhine River frozen over during an extremely cold winter.  There were dozens of barges and small ships locked into the ice, as far as the eye could see.

Each distinct period of employment in the career of the Footloose Forester had a theatre of operations associated with it, and the airlines in those regions often had names linked to those regions.  There were also a few exotic destinations.

Fondly, the Footloose Forester remembers with anticipation touching down at Wake Island and at Midway in the middle of the Pacific.  As he recalls, only TWA and one other airline were awarded contracts for landing rights as they crossed the Pacific between Viet Nam and California.  The memories are not riveting except to say that they appeared as postage-sized outposts that were exclusively devoted to military operations, save for the refueling rights granted to TWA and Pan Am. He was satisfied, however, in being able to assess the atolls astride the airstrips on both islands.

This chronicle is not an attempt at a travelogue or a catalog of types of aircraft or their destinations, but merely an attempt to fill in a few pieces in the puzzle of a hazy picture of a Footloose Forester who was often In the air…again!!!  A recent dream also provided a clue to the mystery of his propensity toward travel.

When he was visiting some of the Peace Corps Volunteers friends that he had trained with in Portland, Oregon, one of the hippier girls volunteered to read the tea leaves for him.  Mary Jo shared an apartment with several other girls in Istanbul but she knew that the Footloose Forester was flying in from Pakistan and she offered to let him sleep on their living room floor.  She even saved a Thanksgiving dinner of roast turkey for him, since he missed Thanksgiving in Turkey by one day.  It was the following day when she read the tea leaves and announced that the Footloose Forester would travel down many roads, but none of them would lead anywhere.  He will never forget that little tête-à-tête in Istanbul.  Curiously, he does not remember enough about the airplanes that got him there.  Maybe it was about the need to change planes from the Lahore, Pakistan flight out on PIA, the Pakistan International Airways, into Afghanistan, with a stop-over in the modern airport at Ishahan and then on to Tehran, Iran to visit another Peace Corps friend. The haziness continued.  The next stop was Baghdad, Iraq; then Damascus, Syria. The intrepid Footloose Forester then decided to cross the border into Jordan by bus; likewise, to go by bus into Lebanon.  On the road…again!!!

The same dream that recalled the session of reading the tea leaves in Istanbul was also the dream that reminded him that he was trying to remember the defunct airlines that he had flown during the ensuing years.  There were a least a few:  Piedmont Airlines out of Pittsburgh, succeeded by also defunct Allegheny Airlines, and Peoples Express out of Newark, New Jersey.  There may be others. During the War in Viet Nam, he recalls that Southern Airways and based in Miami, Florida was presumed to be financed by the CIA.  People made jokes about that.  Air America which was a real mainline CIA transport system, did operate in Viet Nam and Laos.  The Footloose Forester was always delighted to fly in their single-engine, short-takeoff and land Pilatus-Porter propeller aircraft.  The Swiss-manufactured Pilatus-Porter was designed to maneuver and operate on short runways.  How about less than 300 feet of runway?  Amazing.

The Dutch also manufactured some pretty airworthy aircraft.  One of the favorites of the Footloose Forester was the Fokker-Friendship, a twin-engine propeller plane that took him to his first landing in a dry river bed at Pokera, Nepal.  In later years there were other makes and models that kept the Footloose Forester active in noting the exteriors and the interiors of airplanes.  The easiest to remember, as regards the airframes, were the Boeing 707s, 720s, 737s, 747s, 757s, and 777s.  He flew in them all.  His favorites were the 747s because they were and still are so comfortable and well-appointed; and the 727s because they were so cozy.  Yes, there were McDonnell-Douglas aircraft, as well; and Airbus models that were a bit difficult to identify straight off.  Even an occasional Embraer medium-range business jet manufactured by Brazil, another cozy aircraft that accommodated up to 114 passengers.

No story about flying on small planes and landing on rudimentary airstrips would be complete without mentioning the puddle hoppers that were part of the fleet of TACV, the national airlines of Cabo Verde.  The propeller-driven planes of Transportes Aéreos de Cabo Verde were the only ones that could land on some of the short, unpaved airstrips in the rugged volcanic archipelago chain of islands that did not have any runways long enough to accommodate jet aircraft, except on the relatively flat and sandy island of Sal.

The Footloose Forester is not trying to be a name-dropper or to impress anyone about where he has been or what he has seen.  He is just trying to preserve a few precious memories of his 700+ flights in some exotic aircraft, over jungles, oceans, frozen rivers, and dramatic landscapes.