Lesotho is Surrounded by South Africa

L is for Lesotho

Three days on horseback is just enough time to get the point that not everywhere in Lesotho can be reached by road. Pretty sure that a tank could reach most of the places that the Footloose Forester visited on an inspection tour in the upper watersheds, but then the impact on the environment would have been horrific. Miles of green pastures and not a few shrubby patches of thin soil was what the environmentalists were trying to conserve, and transport by horses was a good solution.

But the Footloose Forester wasn’t a very good horseman, so he wasn’t exactly sure if his horse would cross the rivers at the obvious crossing points. The team leader of our four man team advised him that if the horse (which he himself knew well) didn’t want to cross with a man in the saddle, the only other solution was to dismount, take the reins and lead the horse across. 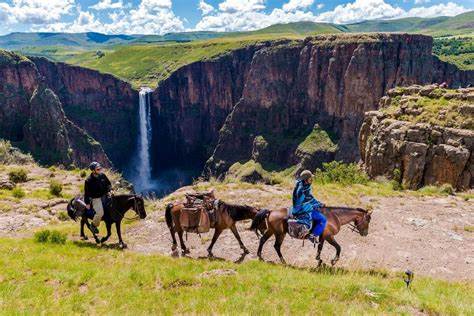 Horseback is a comon mode of transportation

Fortunately, the Footloose Forester didn’t have to suffer that challenge. On the other hand, he had all he could do to keep the nag from galloping out from under him, when the string of other horses came within snorting distance and wanted to race each other and the rider on top. That was when the memories of being thrown off a mule--twice--in Cape Verde came back. He could stand the embarrassment, but at that stage he didn’t want to break a leg some 15 miles from town.

Lesotho is known as the Mountain Kingdom, but it is so small that it is easy to miss on a map of Africa. Hint: it is the only land-locked country completely surrounded by only one other country. That country is South Africa. Even tinier Swaziland is nearly swallowed up by bordering South Africa, but a short common border with Mozambique takes it out of the realm of uniqueness.

Water is the chief export of Lesotho: water and hydroelectric power, as a package, to South Africa. The engineering works there are impressive. But to see the country and fuse some memories of Lesotho that will last, one should really plan to see the country by horseback. Although he does not regret the round trip to Lesotho in a rented car from South Africa, he was wondering why the travel agent in Nairobi booked him that way. There was an adequate airport within a mile of his hotel in Maseru, the capital city.

The drive from Bloemfontein, South Africa was after midnight, on narrow mountain roads. Footloose Forester might have had some experience driving cars with the steering wheel on the right and then driving on the left side of the road, but he wasn’t too thrilled with the 100 mile challenge in the dark.

The Drunkard Mouse Of Joburg