M is for Madagascar

Madagascar is so puzzling as a nation that even the people who live there generally acknowledge that it would be meaningful to divide up the island into four distinct regions. If one would slice the map into four quadrants: directly down the middle and again in the middle from east to west, it would be largely accurate to then discuss  the variations in the vegetation, the position of the mountain ranges, and the socio-cultural differences of the people themselves, in each region.  Also, the facts that the road and rail transport systems are not linked. Only transport by air will get you to any part of Madagascar without difficulty.

The Footloose Forester saw just enough tropical forest in the north and in the south to satisfy himself that a forester can have a perspective that is valued when it comes to deliberations on the management of natural resources, even if those resources belong to another nation.  There are more exotic plants in Madagascar than in perhaps any other country in the world. You don’t have to be a botanist to know that the tree you may be looking up at quite possibly may be found nowhere else on earth. The problem is, there are not enough botanists in Madagascar to make the case about the uniqueness of Madagascar’s flora. Besides, nobody but another botanist really cares. On the other hand, we all know about the many kinds of lemurs in Madagascar. There are many species; and they are widespread enough that they don’t stir up much excitement.  Besides, because they are rather docile, they have been easy to find and to catch.  Zoos have living specimens of probably all of them. 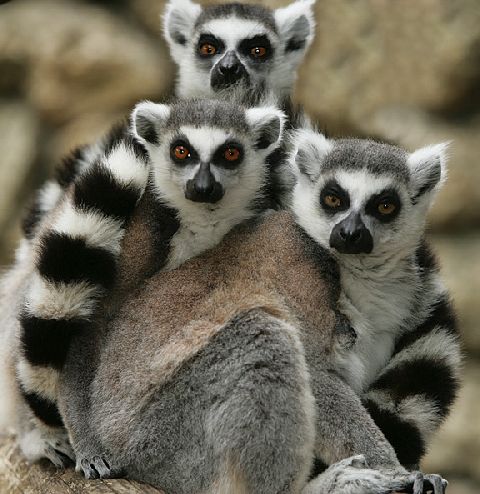 The most compelling memories of Madagascar for the Footloose Forester are not about lemurs or plants, but about thieves. The punks who tried to take down the Footloose Forester and his Bengal Tiger of a wife one evening in the city park will probably remember them, as well.  After an early dinner at a restaurant so they didn’t have to be out in the dark streets too long, the Footloose Forester and Bengal Tiger wife Thu were preparing to mount the five long sets of stone steps that led from the bottom of the hill where most stores, shops and restaurants are, to the top of the hill where the Hotel Colbert was situated. The steps went directly up through the park, but were poorly lighted.

The local thieves knew that and counted on poor light to set their ambushes in the middle of the hill where going up or escaping back down was less likely.  But as four punks closed in -- in the middle of the hill and at the central landing where it was wider and where there was a light, Thu heard one of them coming up the steps from the bottom.  Two others were waiting at the landing, one off in the dark on the left and one in the dark on the right.  The apparent ring leader was at the top.  He didn’t count on Thu hearing one coming to jump her from the bottom. The Footloose Forester was a step and a half in front of her.  As punk #1 made a lunge for her, she wheeled and raked him under his chin with a thumb nail, tucked between her index finger and middle finger, just as she had been taught in karate class.  Before he could react to the others who were closing in, Footloose Forester vividly recalls Thu starting a circling crouch with both dukes up and bolding announcing “OK, who is next?”  Now really, you just can’t make this stuff up.  Punk #1 one fell backward on the steps and the two on the sides were probably too scared to take her on.  The ringleader grunted something in Malagasy, reached into his pocket and his hand came out with something shiny and metallic.  So Footloose Forester reached into his pocket and pretended to reach for his sharp weapon. Ringleader backed off and so did the others, so Footloose Forester didn’t have to do battle with his key to their hotel room at the Hotel Colbert.

A Nobel Prize For Footloose Forester

A Tribute to W. A. Adams on his 90th Birthday

I've got to meet Thu but I will be a very good boy when I do. She's got more moxie than I. Amazing.

I've got to meet Thu but I will be a very good boy when I do. She's got more moxie than I. Amazing.
Cancel Update Comment
Follow