Adventures on the Laikipia Plateau

Going up-country in Kenya with a real adventurer was what Footloose Forester hoped all jobs would be like.  His friend agreed to the use of his full name and association openly, so the Footloose Forester may eventually proceed to tell a few more tales that are remarkable, in their own way. For the moment, however, it would be safe to proceed with a chronicle in which Andre DeGeorges, the African big game hunter who had just recently returned from Uganda, decided to take his own Toyota 4 x 4 and personal supplies to conduct an official field trip relating to hunting game animals on private lands.  At the time, all hunting on public lands in Kenya was banned; but Andre was on a crusade to change some of that.

The Footloose Forester was delighted to be part of that crusade. In retrospect, we were successful; but Andre gets most of the credit for his foresight and dogged determination. A few years after we finished our field studies and submitted our report, the Government of Kenya enacted two separate laws allowing private landowners to harvest game animals on their own land, and to supply game meat to restaurants under license agreements, but unfortunately not for trophy hunting, where the major profits from wildlife management are to be made.  For example, only about 2% of a game species population can be harvested for trophies; and from within 12-25% limits of annual herd size that is permitted for meat producers.

In an e-mail to the Footloose Forester only a few months ago, Andre mentioned the name of Jasper Evans, a rancher who lived on the Laikipia Plateau, over a hundred miles north of Nairobi.  Jasper’s ranch was of modest size, as semi-desert ranches go on the Laikipia Plateau.  Maybe its 30,000 acres might seem large, but it was smaller than some we later visited while conducting our fact-finding surveys.

On the first day at the Evans ranch, Andre and the Footloose Forester chose to camp at a watering hole about a half-mile from the main house.  We interrupted the nap of a cheetah that was sleeping on a grassy bench above the watering hole, so we deferentially staked out our campsite below the watering hole. That also gave a wide berth for other animals visiting for a drink, whenever they wanted.  The next day we were invited to lunch, to try some of Jasper’s homemade gazelle jerky; and then to stay at one of his outbuildings.

Andre reminded the Footloose Forester in the e-mail that Jasper had constructed its walls from thousands of empty glass whisky/brandy/wine bottles.  It wasn’t fancy but it was colorful.  The following morning, Jasper directed us to the ranch of his son, who had, like himself, been a licensed big game hunter before the days when the Kenyan government banned public hunting.  Along with the directions to Simon’s ranch, Jasper told us that Simon had been mauled by a lion, so had a huge scar on his right arm. 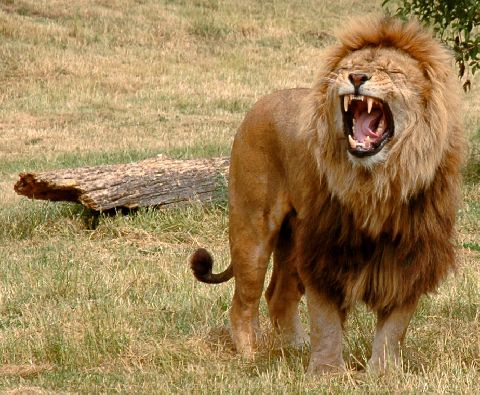 Ten or fifteen miles later, Andre and Footloose turned off a dirt road and up a slight incline to where a white rancher was standing in the sun near the road.  As we approached, Footloose Forester noticed that the man had an ugly scar on his right arm. This must be Simon.  He greeted us warmly when we mentioned Jasper’s name; then he told us to go up to the main house where he would join us shortly.  After we entered, his wife asked us to have a seat.  The Footloose Forester chose the chair directly across from the door, and as he sat down he realized that the rug that he stepped over was made from a lion’s hide—head and all—and was the lion that had mauled Simon.

Back at Jasper Evan’s ranch, the Footloose Forester also met another hunter who had killed a lion.  In fact, she had killed nine lions. She was an adventurous Brit who lived in another of Jasper’s outbuildings, but as his employee.  Her name was Debbie Atkins, a name supplied by Andre from his own notebook.  The Footloose Forester only recalls being there to interview her.  She had come to Kenya as a traveler, but stayed to work with Jasper Evans as his camel master.  Since Jasper could not continue his previous life’s work as a licensed hunter, he looked for other ways to sustain his income.

He chose to assemble a herd of camels and take tourists on camel safaris.  And Debbie Atkins was the one that cared for his string of camels.  But when a lion killed one of her younger camels, she vowed to strike back.  She told the Footloose Forester that one loophole in the Kenyan law allowed farmers and ranchers to kill lions, if they could prove which lion had been responsible, and if they secured the proper permissions.  So, although Debbie was not a hunter before she became a camel master, the lions killed so many of her camels over time, that she personally shot nine of them.  As it happened, she and Simon hunted together for safety reasons. One final memory of the Jasper Evans ranch: Debbie offered Footloose Forester a cup of cool camel’s milk.  He must admit it was even better than cow’s milk.

On Being A Name Dropper

Working As A Career

I cannot imagine a face to face encounter with a full sized lion. Sure, the rifle has the edge but "what if?" The thought that Debbie took this kind of action is quite amazing!!

I cannot imagine a face to face encounter with a full sized lion. Sure, the rifle has the edge but "what if?" The thought that Debbie took this kind of action is quite amazing!!
Cancel Update Comment

You are up and at it early, Tom. Sorry for the double posting...there was a glitch with the linkages.

You are up and at it early, Tom. Sorry for the double posting...there was a glitch with the linkages.
Cancel Update Comment
Follow