Essays of the dream-induced variety are the hardest to compose, perhaps why the hours of fitful sleep are so often interjected with bits of reverie. Call them scraps, figments, bits, or vague ideas but there are enough to consider assembling and shaping them into chronicles that definitely qualify for the Dreams category of musing.

The dream-induced musings last night were all about volcanoes, volcanic ejecta, volcanic soils, and black sand beaches—all associated with volcanic origins.  Except that in the dream, up popped the pleasant memory of a white sand beach located on the same volcanic island and not far from a couple of black sand beaches.  It is one thing to say that the Chronicles of a Footloose Forester may be a mélange of Essays, Stories, Adventures, Dreams, but the stories themselves are most often pieces of a jigsaw puzzle that demand to be pieced together before they can be committed to print.  The reader may never know how tentative the process is but thanks to word processing editing features, the final product is more or less taken for granted.

The bits and pieces of a story all about volcanoes and their attributed postcedent features such as black beach sand, pumice boulders, lava flows, and ash fields constitute a story of geoscience that may forever be difficult to rationalize.  In other words, the geologic histories of volcanoes and their ejecta, blended in with various landforms that subsequently developed, will likely be confusing. That would be, in large part, because volcanoes come in different sizes, shapes, and are composed of different parent materials.  Thus, it is not proper to generalize about the presumed fertility of volcanic soils, or about the color of obsidian.  At one time, the Footloose Forester believed that obsidian was dense jet-black volcanic glass. After he saw brownish, reddish, greenish, and purplish obsidian; he no longer takes for granted what volcanic ejecta may look like when it is fresh, or what the weathered by-products will become.  Remember the white sand beach (located in Cape Verde) a few miles from a string of black sand beaches?  All of them are abraided remains of ejecta of the volcano or volcanoes that formed the Isla de Santiago.

The jumbled dream about volcanoes pushed into focus another bi-product that has been a mystery ever since Footloose Forester first saw it arrayed in broad patches across the landscape on the island of Santo Antao, another of the volcanic islands of the Cape Verde Archipelago.  That geomorphological feature was a discontinuous field of pozzolana.  In brief, Pozzolans are associated with volcanic bi-products that are found in some but not all volcanic regions.  They form a broad class of siliceous or siliceous/aluminous materials which, in themselves, possess little or no cementitious value but which will become, in finely divided form, useful in paint manufacture, or can be ground into pumice. 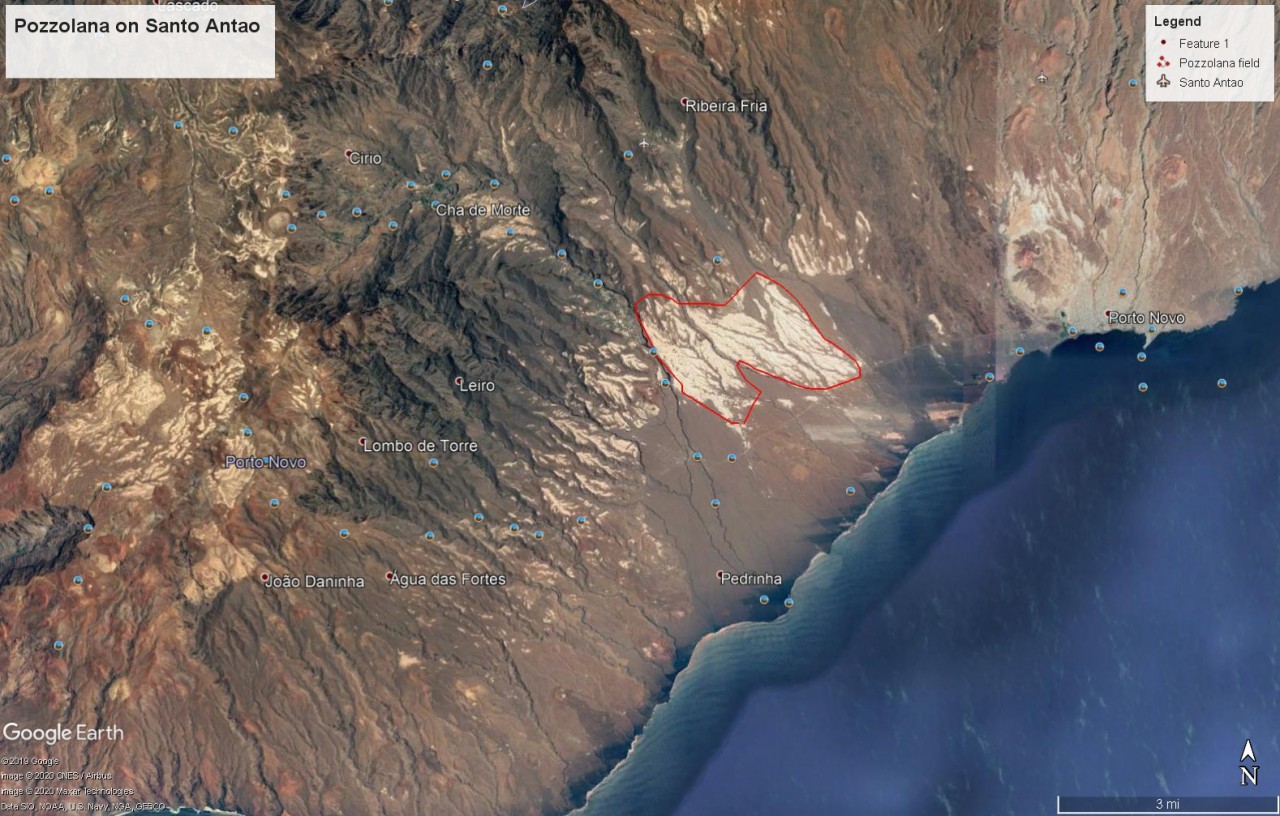 One of several pozzolana fields is outlined in red

The pale white fields of pozzolana seen in the photo above were in an uninhabited sector of Santo Antao that was so dry and devoid of soil that people were uninterested in occupying the area except to construct a few open-door huts that were carved out of pure pozzolana and hollowed out from the flanks of the mountainside where they occurred.  The pozzolana found there is so light and fluffy that it resembles packing foam. A few of the patches were wide and deep enough to carve huts into the hillside.  Presumably, the huts were used temporarily to escape the heat of the day.  Sometime in the past, the Republic of Cape Verde banned the use of such huts as residences because the roofs and walls, although very easy to cut into and to shape, were susceptible to cave in.

All in all, the haunting memory of pozzolana huts on the slopes of a mountain in Cape Verde was enough to dispel the notion that the Footloose Forester knew much of anything about volcanoes, their contents, the size, shape, density, or the colors of their ejecta.

On Celebrating The 46th Anniversary Of Our Honeymoon