Many moons have risen and set since the last time that the Footloose Forester was in the mood to write a chronicle that belongs in the Humor genre, with an unstated theme of “you just can’t make this stuff up.” But today, as an ebullient mien surfaced on the heels of his completed and posted income tax filing ordeal, he decided that he would hark back to the days of smoky airplane cabins and the presence of nicotine stains oh his fingers. Where to start?  The chronology probably doesn’t matter…the muted chuckles and uncontrolled groans are still in his head.

As an adventurous Explorer Scout who was willing to try anything once, the Footloose Forester recalls the warm summer nights in Stokes State Forest where he was introduced to the marvelously rich taste of Raleigh cigarettes. There were other brands here and there but none ever tasted as good as those first Raleighs, before the days of filter tips.  He was not trying to be a cool dude or one of the boys, he was just eager to taste one of the forbidden fruits.  As it turns out, the subsequent Lucky Strikes, the Camels, and the Chesterfields did not taste as good.  Fortunately, he ultimately decided in later years that smoking had more drawbacks than appeals, so he never became a heavy or even a regular smoker. The last cigarette was puffed over 50 years ago. But there is a real story that goes into the manufacture and the ultimate taste of those cigarettes.

American cigarettes are prized around the world because most manufacturers of tobacco products blend various varieties and kinds of tobacco leaf into their products.  Some cigarette packs, not all, advertised their blend of rich Virginia, Burley, Bright, and Turkish tobaccos; long cut and slow-burning. Looking back at how other countries rolled their tobacco in cigarettes led to the inevitable conclusion that American cigarettes were overwhelmingly preferred.  To put a finer point on the differences requires that the reader trust in the vague and imprecise recollections of the Footloose Forester, but he is quite willing to tell about what he knows and remembers.  And his lungs did invite in Canadian, German, Pakistani, Italian, French, and Indonesian cigarettes at one time or another.

Canadian cigarettes burned hot because they were blended almost entirely with Virginia tobacco, German cigarettes were also either Virginia tobacco or Turkish, either light smokes or heavy smokes that were perceptively characteristic of the tobaccos inside.  The locally manufactured K-2, the cheapest of the Pakistani cigarettes were rolled with Virginia tobacco and it was an outward sign, even among the American missionaries who sometimes smoked them, that missionaries usually could not afford the better-quality imported cigarettes that were also on the market.  Even lower in quality and insufferable in their offensive odor and taste were the local “bedi” tobacco products. The crudely made bedis resembled a thin cone of tobacco leaf, minus a traditional white paper wrapper.  Smoking one of two bedis was done to win a bet, rather than to satisfy a craving for a hit of nicotine. To stoop even lower, the abominable Gauloises brand of French cigarettes took a special kind of person to even possess them, much less to tolerate being in the same room where they were being smoked. 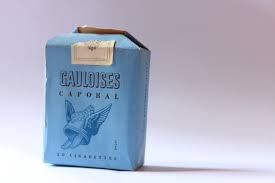 If you ever smelled a lit Gauloises, you would never forget it

If there were two styles of cigarettes that were almost as obnoxious as the French Gauloises, one of them had to be the kretek cigarettes of Indonesia.  Made with crushed clove mixed in with Turkish tobacco, the odor of a lit kretek cigarette was unmistakable.  Fortunately, most all kretek cigs waft the air around Indonesians, 85% of whom prefer them to other cigarettes. The other real stinker is perhaps more familiar to modern smokers—the marijuana roach. The lumpy stubs of roaches are easily detectable by non-smokers because they are all hand-rolled (as far as I am aware) by the smoker who crafts them one at a time when it is safe to do so.  They may be the all-time stinkers when it comes to painting a varnish of telltale and long-lasting olfactory evidence on living room walls, bathrooms, and in rattletrap cars. Self-respecting luxury automobiles probably would be affronted with the acrid, putrid haze of the marijuana roach.  Nonetheless, the buzz that comes from “weed” has just as strong an appeal to smokers as does the nicotine hit that comes with tobacco products.

The strong association of tobacco smoke within the confined spaces where episodes of smoking were married to the undercurrent theme, that “some things you just can’t make up” leads into three unrelated memories about smoking and inside the cabins of airplanes.  The first bizarre tale is about the time the Footloose Forester was returning to Hawaii from a job interview at the Department of Energy's Argonne National Laboratory in Illinois.  Uncle Sam had generously provided round trip airfare on a United Airlines 747. It was late afternoon in early winter when we boarded the huge plane that was about 80% empty. Although we had seat assignments, it did not matter and no flight attendant showed up to guide us.  He chose a seat in the non-smoking section that was almost empty, save for one young Canadian snowbird who may have been starting his retreat from a long snowy season.  As we flew west into the sun, the sunlight coming into the cabin made for very pleasant surrounding both inside and outside the quiet cabin.  The Footloose Forester looked back into the smoking section to notice three other Canadians, also probably snowbirds, having a lively conversation.  When they noticed their friend sitting alone in the non-smoking section, they promptly got up and joined him, in the row just forward of where the Footloose Forester was sitting.  All three then lit up cigarettes and invited their friend to join them.  As much as he dislikes butting into other peoples’ business, the Footloose Forester got up and reminded them that we were in the non-smoking section, but if they insisted on smoking, he himself would move back into the smoking section because it was now completely empty.  You just can’t make this stuff up!

A second story that may be hard to believe occurred on a flight from Addis Ababa, Ethiopia to points west, probably Dakar, Senegal when the Footloose Forester was returning to Haiti after presenting a soil conservation paper to an international group.  That airplane belonging to Ethiopian Airlines was nearly full, thus the burly guy who plopped into the seat next to him looked like he was going to create some competition for elbow space.  As it so happened, Ethiopian Airlines did not have a smoking-nonsmoking section policy at that time.  You guessed it, just as soon as we reached cruising altitude, the guy reached into his clothing and came out with a package of horrible smelling Gauloises.  He promptly lit up and henceforth made life miserable for the Footloose Forester for the long flight from Addis Ababa to Dakar. You just can’t make this stuff up!

Finally, the third story about smoking on airplanes in the days before in-flight restrictions took effect worldwide goes something like this: My wife, the Bengal Tiger will attest that it was true that, when we departed for a vacation from Cape Verde we arrived in Geneva, Switzerland on Transportes Aereas de Cabo Verde (TACV) and were scheduled to continue on our chosen next leg back to Rome on Transportes Air Portugal (TAP).  Upon entering the cabin, the flight attendant proceeded to give us instructions about in-flight safety and the TAP policy on smoking.  As she stood in front of her captive passengers, she announced that smoking would be permitted on the left side of the main aisle and that the right side of the aisle had been designed as the non-smoking section.  You just can’t make this stuff up!

And then there were the pipe tobaccos.  From adolescence, the Footloose Forester recalls that his Uncle Buss Perry, Mooney's Milkman, smoked Half and Half, a moderately strong blend that could be identified even sitting in the bleachers during the football games when Netcong High School played at Netcong Field, off Mooney's Road.  Small world!   Model pipe tobacco was a much milder blend and was probably the first one that Footloose Forester tried out when he bypassed cigarettes to become a sometime pipe smoker.  For the most pleasant of pipe aromas, however, nothing much came close to Cherry Blend.  You didn't have to smoke it to enjoy the aroma.  These few comments are leading up to one of those "what goes around, comes around" addendums to the story.

Cherry Blend was a mild smoke with a pleasant aroma but there was one that was even more appealing to a novice pipe smoker.  It was called Midnight by the tobacconist who concocted it and touted it as a very mild pipe tobacco for new smokers. His tobacco shop was located somewhere in the midst of one of those huge shopping malls in New Jersey.  Getting hold of a package of Midnight was literally a once in a lifetime event for the Footloose Forester because he never went back to that mall and never again heard of Midnight.  But would you believe that to this very day, a small package of Midnight is nestled inside a sealed metal canister in his shed?  From time to time, the Footloose Forester opens it up and inhales its essence.  He hasn't smoked any for several years but he does not plan on throwing it out.  Why not?  Some things in life you just cling to.  In the meantime, he has taken to sprinkling the unlit tobacco of Borkum Riff, a Swedish pipe tobacco blended from Virginia and Burley tobaccos into an aroma dish in his office.  Aromatherapy may, or may not, play a role in his mood but it has changed the ambiance in his office. The contents of the 60-year old package of Midnight have not yet been made an acquaintance with the aroma burner, but there is no hurry.  La pièce delà résistance will be savored for a little while longer.

25 Foot Waves Made The Passage Exciting

Legacy Stories Get Remembered Best When They Are Recorded First