The recent decision of Facebook to encourage account holders to contribute text and photo stories in a special window of their website is an invitation to greater sharing of personal thoughts.  The worldwide membership of Facebook opens the door wider to an expansive audience that spans the globe and reaches its readers with the convenience of automatic translation. The operative word in the initiative and innovation is story.

A story can be, perhaps must be, a one-off entity that may be thousands of years old or a re-telling of an event that happened on the way to the ball game.  As individual entities, stories may be oral or written accounts that are transmitted by word of mouth, embedded in recordings, videos, or motion pictures, or committed solely to printed modes such as paper and word processors. 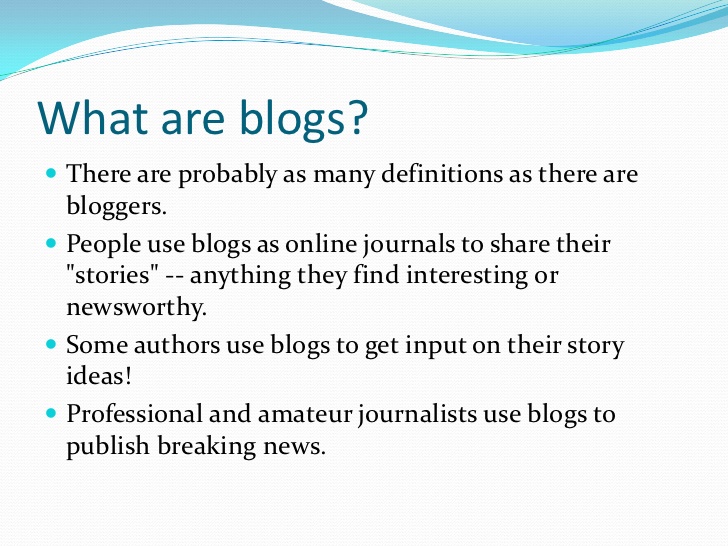 Blogs, on the other hand, are inclined to be stories that are committed to print and computer archives in the form of the written word.  One feature of blogs that can be singled out is the expectation that the blog writer has a personal collection of his/her own writings, furthermore that the blogger has the intention of sharing those writings with others.   A blogger most often has their own website and maintains it as a depository of both incidental and often lengthy musings.  The great advances and conveniences of modern communications help to facilitate the sharing of blog content with others; again, to a worldwide audience.  At this point, it can be seen that one difference between a storyteller and a blogger is the presumed intention of the blogger to marshal ideas and to share them regularly and systematically with others.  Blogs can be about any subject whatsoever and may contain variable content.  By way of full disclosure, the presumptive blogger who calls himself the Footloose Forester confesses to maintaining a blog site where he creates and stores his musings, and from which he shares those entries with others.  Once again, due to the facility of worldwide communication links and the fact of his marriage to a Vietnamese woman, those musings are read (and often translated) in other languages. The Footloose Forester can only guess that back-and-forth translations are in English, French, Vietnamese, Lao, German and Korean, inter alia.

Without pretense or a phony sense of modesty, but with a quest to describe himself with appropriate credentials, the Footloose Forester prefers to label himself as a forester and a chronicler.  Indeed, he likes to tell stories; indeed, he has a treasured blog site, and indeed he takes pleasure in crafting an occasional essay.  But when it comes to labels, he considers himself a forester who tells stories, blogs, crafts an occasional essay, recounts an infrequent adventure, and tries to derive something of value from dreams.  Blended into the labeling process, he long ago settled on a masthead: Essays, Stories, Adventures, Dreams: Chronicles of a Footloose Forester.  He eschewed the use of the word and in the masthead because each chronicle entry was, or will be, a story or an essay, or recount an adventure, or be about a dream.

There is no need for the reader to assume anything about purpose and design in the framework construction of the Chronicles of the Footloose Forester.  The author is not trying to persuade anyone about various points of view but merely wishes to share what the author himself thinks about things.  First and foremost, he wishes to share his views with others.  The reader can accept them or reject them.

In many of his chronicles, the Footloose Forester tries to impart a few life lessons, as he sees them, or as they relate to the subject matter.  In this current chronicle blog, the final issue is all about how his own musings are received.

In scientific journals, the subject matter very often must pass peer review before it is accepted for publication.  That is to say, scientific literature that is proposed for publication must be reviewed and approved by a body of peers before it is accepted. Unfortunately, there are several interpretations of the meaning of the word peer.  Peers, by one dictionary definition that he prefers, are individuals of equal or superior standing in relationship to the one under scrutiny. The proposed manuscripts are expected to be thoroughly read and critiqued with critical viewpoints.  Getting published means having your reputation at stake.

To his knowledge, there is no peer review required for submission of a text story to Facebook, Twitter, WordPress, or other popular websites where individuals submit their ideas. Nobody is assigned to read their contributions, nobody is designated to rate its content, and nobody is labeled as a peer reviewer with the presumed gravitas to pass judgment about its validity or importance.  The idea of peer review in such sites is not relevant. Having said that, it becomes obvious that careless, hurtful, inaccurate, and/or false information can proliferate on social media sites where some contributors wish to spread their ideas. People can pretty much say anything they want to say, within a few defined guidelines of civility.  Freedom of speech is paramount, but fake news and misleading ideas do not lead to everybody being well informed.

There is a life-lesson somewhere in this chronicle that suggests that we as presumptive authors are interested in knowing who reads our stories, blogs, or chronicles; furthermore, we wonder what people think about them.  As someone who has repeatedly stated that he is not interested in writing with a profit motive, the Footloose Forester does, however; wish to know why some chronicles are widely read and others are not.  By virtue of the “counter” feature in some websites that record the number of hits each entry has, he knows that more than 300 of his chronicles have recorded more than a thousand “hits”, which presumably means that they have been read.  A rather uninspired chronicle in terms of writing style, is one entitled Burundi, Rwanda, and Genocide; but has recorded 22,662 hits; The Survey Revealed a Misplaced Spring with 12,940 hits.  He also wonders about who was interested in reading it.

Writing a good article is really a difficult task, but sometimes the most difficult part is choosing the topic of the paper. There you will find a big variety of topics relevant to the WORLD WAR II https://topthesis.com/blog/good-second-world-war-essay-topics.html I think this selection will be useful for students and teachers who work on this topic.

Writing a good article is really a difficult task, but sometimes the most difficult part is choosing the topic of the paper. There you will find a big variety of topics relevant to the WORLD WAR II [url=https://topthesis.com/blog/good-second-world-war-essay-topics.html]https://topthesis.com/blog/good-second-world-war-essay-topics.html[/url] I think this selection will be useful for students and teachers who work on this topic.
Cancel Update Comment
Follow