We all have our favorite foods.  But we don’t all agree on what those dishes or recipes are, thus the eternal discussions about foods and one of the primary urges that humans across the globe have in common.  Advertisers stay away from touting ethnic foods, perhaps knowing that a loyalty base would be limited to those who may have acquired their knowledge as insiders in various cultural groups. That leaves the field wide open for promoting variations of basic groups such as hamburgers, cheeses, and even breads; and how those specially prepared entities may be seen as superior when you obtain them or devour them in one of your franchise restaurants. Advertising is so powerful that there is even a healthy market for bottled water and a loyal fan base that evolves through the jingles, the promotions, and flashy labeling.  Most people would acknowledge knowing a least a few words to several jingles that they assimilated in earlier years and retained as hard-wired mental mantras, to be repeated at appropriate times.

The power and the compulsion of advertising should not be dismissed as merely a tool in selling merchandise in the commercial world.  We as rational creatures can be enticed to ascribe to certain norms of conduct in our everyday lives that have nothing to do with commercial motives.  How we choose to dress, act, and participate as members of community groups is partly influenced by our peers—who advertise who they are and what they are about.

So, what does all that have to do with a better bagel?  The pusser* Footloose Forester is always on the lookout for better-tasting foods, especially now that he is a widower who increasingly surrenders to canned and packaged foods to conveniently fill his tummy.  These days it is bagels, and the quest for the best bagels in the area has not yet ended.  Looking back, he remembers that in the Pittsburgh area there were several bakers who made very satisfactory bagels.  Hence, the jingle:  Bruegger's Bagel Bakers Bake a Better Bagel got his attention at the time, and they indeed baked a great tasting bagel.  The supermarket chain Giant Eagle made their own, on-site and we might have taken it for granted that we could get wonderful bagels nearby.  The operational word is nearby. 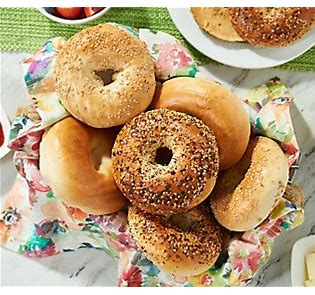 Panera Bread outlets should be included in the group making tasty bagels because you couldn’t go wrong with Panera’s bagels, but in those days that major franchise operation wasn’t widely expanded and definitely not close to home.

There are bagels in bags that you can buy in dollar stores in most towns, and a few brands that are pre-packaged and available in some food markets.  But, like many things in life, brand loyalty comes from being satisfied with the product itself, and not just based on the label it bears.  The Footloose Forester is grossly unsatisfied with almost all the pre-packaged bagels he has been trying lately. The size and stature of major national baking conglomerates have so far not convinced him that their bagels are worth buying a second time around.  Did the Footloose Forester ever regale you with his disappointment that Americans can’t seem to bake a decent French baguette?  Baking good baguettes and bagels is not rocket science, thus hope springs eternal for the pusser Footloose Forester who is hankering for a decent bagel onto which his cream cheese awaits.

* a pusser is a person who exhibits a certain level of finickity or persnickety attitude regarding foods, and other things