For many adults, the Boy Scouts and the adventurous times in Boy Scouts was an enlightening, formative period in our lives.  It was also a time of informal education that had its own curriculum, the kinds of hands-on learning that is useful throughout our lives.  For the Footloose Forester, being in the scouts was a bittersweet period of time, partly because he started as a Tenderfoot Scout in Troop 99, Netcong, New Jersey, and left Troop 99, two years later, still as a Tenderfoot. He wasn’t demoted. The troop was disbanded, reconstituted, and disbanded/reconstituted again.  Each time, the eager boys who wanted to belong and to grow in their knowledge of outdoor skills, had to start over as Tenderfoot Scouts.  He was a Tenderfoot three times.

Today, some 70+ years later, he is a Tenderfoot again.  He is willingly learning about tying knots that come in handy when camping, fishing, tree climbing, backpacking, farming, boating, and mountaineering.  A few of the knots he had learned as a Boy Scout, but these days several instructional videos are available on YouTube that takes knot-tying skills to a whole new level.  What he learned on YouTube was eye-opening.  There are various ways to tie the same knot and the on-line student of knot tying gets to choose the method that seems easiest to remember.  With the opportunity to back up the videos and re-visit each step, slow learners can proceed at their own pace.  Practice is important, believe me.

What was missing during those knot-tying sessions in the Boy Scouts was any real expertise in those skills among the leaders; and a general lack of instruction that explained the reasoning and need for various knots.  Sad to say, during his Boy Scout days, it was a case of the blind leading the blind.  To be sure, we had a Boy Scout Manual with some knots illustrated in it, but for the most part, it was a case of self-teaching within the prescribed time period allotted to knot tying.  We didn’t get too deep into knot tying skills. 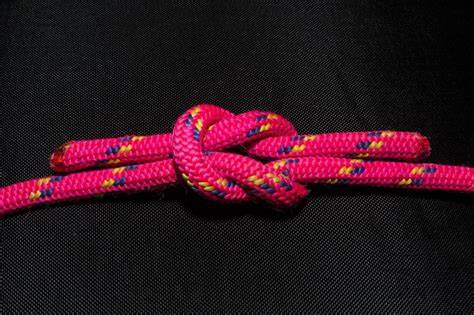 A square knot, first learned in the Boy Scouts

In addition to the basic square knot, clove hitch, bowline, sheepshank, and double half-hitches he learned and remembered from scouts, the present-day videos produced by experts and available on-demand on YouTube introduced him to more sophisticated knots that serve many practical and professional applications. The Footloose Forester is especially grateful in learning why one type of knot is used in one situation but that same knot would not be satisfactory in another situation.  And that is why knowing how to make a bowline on a bight allows you to easily retrieve a mountain climbing rope from an anchor tree at the top of a hill, but a simple bowline is not the knot to tie at the base of that tree.  On the other hand, a taut-line hitch is a better knot to use when throwing a looped rope to a swimmer in the water.  Both a bowline and a taut-line loop can be draped over your head and under your arms but the loop of a bowline cannot be made larger or smaller.  A loop made with a taut-line hitch can be made larger or smaller by the swimmer in the water.

A graphic and step-by-step instruction on how to tie a fisherman’s knot will not only help you make a secure knot with slippery nylon fishing line, but it will also allow you to assist in tying the hooks and leaders on the lines of your fishing companions who may or may not know much about making truly secure knots that will not slip.  He speaks from experience.  In addition, they may remember the lessons for the next outing.

One of the major revelations that Footloose Forester consciously sought and uncovered about knots was the rationale associated with the Prussik hitch, also known in its variations as the Distal Knot or Swabbish hitch. Several YouTube videos demonstrate how to tie it but also explain why they are important in tree climbing and mountaineering.  It turns out that a Prussik hitch is also useful in rappelling and belaying up and down ropes in circumstances that can have applications in suburbs and cities.  Knowing how to safely rappel down the side of an apartment building should add a sense of safety for the average city dweller.  Obtaining a suitable length of rope and attaching a belay/rappel line could be an inexpensive, life-saving investment in a first-aid device that does not come from the medicine cabinet.

To be sure, there is a certain overly technical haughtiness in the names of the knots, themselves.  And in the technical language used in some of the videos. It is true that labels help to separate out things that should be labeled to properly identify them but sometimes the labels themselves are sources of confusion.  If you learn how to tie the Distal Knot, then you already know most of what follows in learning to tie the Swabbish and the Prussik and should have learned why and how they are used in mountaineering work.  Thanks to distance learning, we can take our time learning these knots.  You can back up the videos and see where you may have gone wrong.  And nobody is going to scold you if it takes 5-6 times to get it right.

Looking back to the days of learning how to tie knots, the terminology may have been simpler and the expectations less demanding, but the Boy Scouts experience was a genuine hands-on venture in self-learning and a hint that life will require us to occasionally seek out better ways of doing things and learn as we go along. Thus, it was only after a passage of 70 years did the Footloose Forester learn that the Slip Knot he learned in Boy Scouts is also an essential component of the Truckers Hitch and might be the grandfather of a simple knot called the Marlin Spike Hitch.  Oh well, we splitters have to take the bitter with the sweet. And do our homework.