Only when the Footloose Forester reviewed the presumed acknowledgment/comment box for Ambitious about students in his class, as reported in the for-profit website called Classmates, did he even think about himself that way.  His graduating class of 1956 was very small, as high schools go.  And although we knew everyone by name and by sight, we were not in the habit of referring to one another regarding comparative attributes of personalities or character. Maybe some people did, but generally not to your face. When you are all thrashing about in the waters of adolescence and hoping to keep from drowning, your classmates didn’t talk about your personality traits.

Yes, it was true that his classmates did vote him as Most Studious in the Netcong High School, Class of 1956 yearbook, and had that distinction archived, including a photo of him. The photo serves as a suggested presumption for all time. But the fact of the matter is, the Footloose Forester always thought of the word “ambitious” as a pejorative term for someone who may be ruthless, insensitive, and self-serving.  If he had ambitions, they were to succeed at what he chose to do in life.  Using people or being insensitive to people or the norms of social conduct was not part of his plan.

You bet, he was eager to climb Volcán Izalco (seen below) and to explore its interior.  That is one enduring type of ambition that will never fade, regardless of the passing of years. 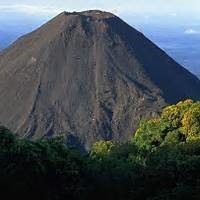 Yet, peer pressure and personal goals did have a way of shaping his values. Thus, what other people thought of you did indeed have an influence on how you acted and developed as a teenager and as a future member of the community.  Words of praise were secretly welcomed but pejoratives were stingingly embarrassing and not soon forgotten. Hence, another more pejorative expression, “blind ambition” reinforced his belief that to openly express ambition was something he would never do; and never, ever relate to that way of thinking.  Having dreams is a softer way to express one’s desires.  Announcing ambitions might suggest a sharp edge on those desires.

I am very enjoyed for this blog. Its an informative topic. It help me very much to solve some problems. Its opportunity are so fantastic and working style so speedy CLIK HERE.

I am very enjoyed for this blog. Its an informative topic. It help me very much to solve some problems. Its opportunity are so fantastic and working style so speedy [url=https://www.einpresswire.com/article/543197693/with-rising-market-value-silver-good-2021-investment-says-saint-jovite-youngblood]CLIK HERE[/url].
Cancel Update Comment
Follow