A book with pictures always adds something positive to the storyline. Short stories usually don’t have pictures but that does not mean that pictures or sketches don’t suit the short-story genre. With the ever changing sophistication of computer technology, we should be seeing more maps, photos, scanned documents and other embedded objects in short stories. No, we will soon be seeing a new genre of creative writing. Perhaps librarians around the world will be obliged to catalogue short stories with embeds in a way that is different from the present cataloguing protocol.

This chronicle is an attempt to retell a true story in such a way that the magnificence of the scenery, itself, is more compelling than the words in the narrative. The story is about the time when the Footloose Forester came within a few moments of death as he attempted to scale the Zugspitze, the highest mountain in Germany. As he reflects upon the events of the past, he is gratified to know that the experience was a joyful one then, and is a joyful memory now.

A young, confident Footloose Forester on leave from his US Army post in Germany in 1962 decided to climb a mountain in the Bavarian Alps. He began his solo trek from the shores of a resort lake known as Eibsee, and hiked south toward the Austrian border, a border shared with the ridge line of the Zugspitze (Figure 1).

The day was bright and warm so it seemed that he would be able to reach the top and return via the cable car that departed from the restaurant on the summit, before it got dark. There were plenty of ski trails on the lower slopes of Zugspitze, so finding a suitable trail to follow was no problem. At some point the trees and thin soils of the lower slopes gave way to stone on which no vegetation whatsoever was evident on any side. Some would describe it as solid stone, just to make the point; but upon close inspection one could also see fissures and cracks in the various faces that made climbing possible. The Footloose Forester was interested in getting to the top by challenging himself to find a way that was not only realistic; but doing it before it got dark. He didn’t want to spend the night shivering in some crevice away from the wind. Besides, he didn’t have any food.

The climb was upward through a well-traversed route of skiers who went as high as they could before descending though a col to the bottom of the mountain. When rock replaced soft ground you could stand on, the Footloose Forester then started to ascend hand-over–hand until he cleared the last ridge that led to the sector where upward ascent seemed likely. It was not too difficult or dangerous at that point because there was always a hand-hold and several foot-holds from which to choose. The last gesture before attaining the top of the rock ridge, however; was with the aid of a piton that had been left in a rock fissure by former climbers using ropes and pitons. Once on top of the ridge, the Footloose Forester was able to survey the massive concave bowl in front of him, and from whence the ascent to the top had to commence. The yellow stickpin in Figure 1 shows the location of the point from which the most difficult part of the climb began. It is also the point at which he almost lost his life.

From his survey position on top of the ridge to the east, he descended down into the concave bowl; passed within a few feet of the drop-off of a talus slope that is so prominent a part of the concave bowl that it can be seen for miles; and began to again climb upward on the west side of the bowl. He was seeking a route up the west side that had enough fractured faces to perhaps permit a climber to negotiate a way to the top of the last ridge line leading to the summit of Zugspitze. He was doing well enough to find one foot-hold and hand-hold after another. Eventually, however, the possibility of upward movement came down to a dangerous move. It required abandoning the mountain climbing rule of having at least one hand and one foot in contact with the surface at all times.

As he contemplated the prospect of returning to the last position below him (a single granite nub only about four inches across) and finding another route to the top, it started to rain. He knew then and there that trying to drop down onto the tiny granite surface of wet stone below him would not be possible, so he had to go up. The Footloose Forester smiled and said a prayer of thanksgiving for the privilege of being on that beautiful mountain in the morning sunshine; then he made his move.

From a one-foot, one-hand perch he had to change position to attempt a leap upward to a 400 pound boulder that sat at the edge of the talus slope to his left. The boulder was partially wedged at a choke point just above the drop-off where, if dislodged, it would be free-fall about a thousand feet to the lower slope below. The yellow stick-pin shows the location of the impasse in Figure 2; and the red line traces the intended route to the ridgeline leading to the top.

Overview of Zugspitze and environs

First order of business was to switch from a left-hand and left-foot hold on a small granite nub, to a right-hand and right-foot hold on that tiny granite surface. The Footloose Forester jumped in place and switched feet and hands simultaneously, leaving his left side free to reach for the boulder that was above him to his left. When he was satisfied that he could leap high enough to grasp the boulder above him, the next questions were whether he could hold fast to the boulder, sitting so precariously at the lip of the talus slope; and whether the boulder would hold his weight. As the rain began to intensify slightly, he knew that it was a case of jump up and live; or tumble down with the boulder to a stony impact a thousand feet below. The decision did not take too long. 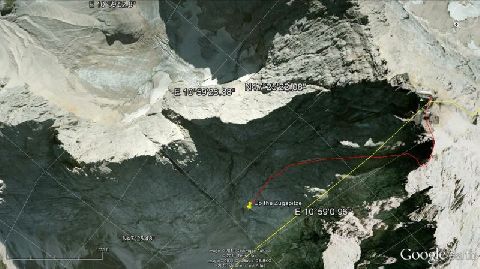 With another short prayer flashing through his head, the Footloose Forester jumped upward to clasp the boulder and quickly swung his legs to the left to gain purchase on top of the boulder. As he did, the boulder moved but did not dislodge. Once he was on top of the boulder he scrambled upward in the scree of talus just beyond the unstable boulder. He knew then that he was going to live. Getting up the steep face on the west side of the concave bowl looked difficult but it was not. A long section of fissured rock led right to the top of the ridge. Luckily, he made it to the restaurant at the pinnacle of the Zugspitze before dark, and was able to enjoy the scenery as he relaxed in the warm security of the last cable car of the day, as it descended back down to Eibsee. 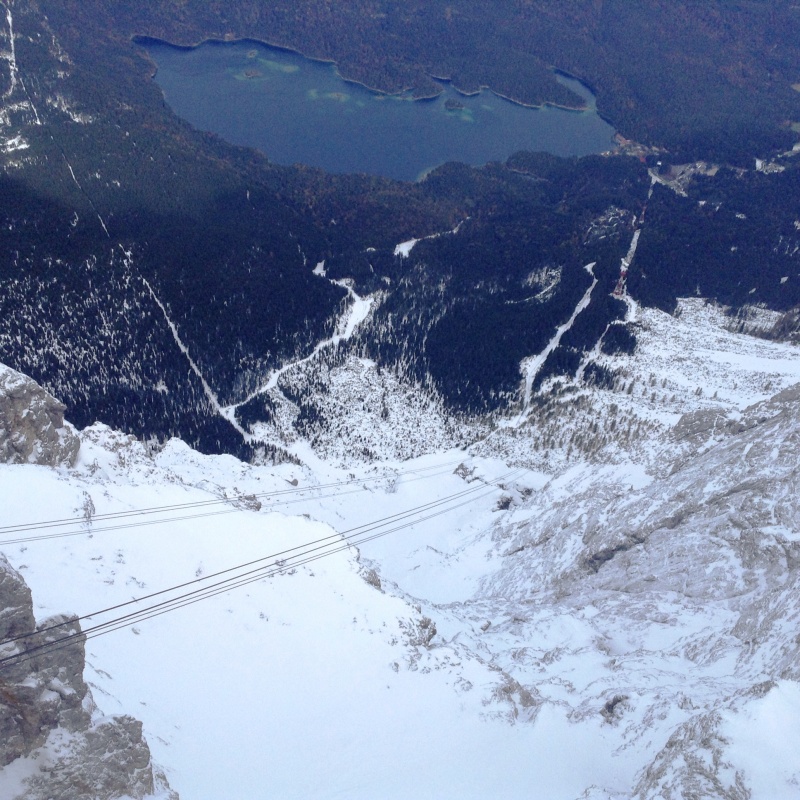 The choke point was just above the circular patch of snow in the right-center of this photo, taken 50 years later

Anyone interested in making a virtual climb of Zugspitze for themselves should first install the Google Earth program on their computer and choose a starting point close to the marked point of impasse at N 47° 26′ 34.35″ and E 10° 58′ 19.87″ where the 400 pound boulder once lay balanced at the edge.  In all likelihood, it has long ago been swept down the mountain in an avalanche, so can no longer be seen on the satellite photos of the northern face of Zugspitze. Gone also is all but the skeleton of a large hanging glacier that once formed below the restaurant at the summit and carried its load of snow and ice in a westerly direction. Today only the path of the glacier is discernible, marked by a small, extant tarn lake.

What I know of my Grandparent's faith
Obelisk in Shadow