The whole world knows something about coffee.  Many millions of people drink it every day.  A few million are involved in growing it, hundreds of thousands are engaged in harvesting it, processing it, packaging it, shipping it, advertising it, and selling it.  But what is coffee?  A plant?  Yes.  A crop? Yes.  A commodity? Yes.  The contents of a recognizable container?  Yes.  A familiar package wrapped in double-lined paper? Yes.  An item on the shopping list? Yes. The stuff you put in the brewing device we know as a coffee maker? Yes.  The sole ingredient you spoon into a funny-looking pot with a removable filter? Yes. The stuff we drink early in the morning? Yes.  The drink we offer to guests who show up unexpectedly?  Yes. The sophisticated post-dining offering après-feast?  Yes. The one consumable many of us declare that we could not live without?  Yes.

The whole world knows something about coffee, and they start learning at an early age.  But Coffee World is bigger than any one person knows on a personal level.  It is easy enough and safe enough to generalize about coffee, and throw-away anecdotes would likely go without meaningful challenges.  Serious discussions about coffee, however; must engage the splitters, to amplify and broaden the knowledge of the realm of coffee culture; and of the genuine chain of custody in making coffee in your cup a daily enjoyment.

Some Chronicles of a Footloose Forester are whimsical, some are quasi-professional tomes, many are biographical, and quite a few are based on reprised dreams.  Furthermore, many contain anecdotes if for no other reason than the realization that observational anecdotes are more likely to endure in the hard-wired section of the memory banks of the Footloose Forester.  Without peer review and scolding from his reading public, the Footloose Forester is content to continue writing chronicles laced with anecdotes.  Being On the road…again in many interesting places around the globe gave him a perspective that he likes to share.  Take it or leave it.

In this aspirational chronicle about coffee, the first thing that the Footloose Forester wants everyone to know is his delight with having many opportunities of seeing coffee plants growing at individual homesteads, in small plantations, and in several countries.  Seeing how coffee farmers plant, tend, and nurture coffee plants was always instructional; besides he was tasked with working on a coffee growers’ support project in Haiti, was an occasional visitor to coffee farms in the Dominican Republic, El Salvador, Kenya, Burundi, Hawaii, Costa Rica, and Ethiopia.

The first stage of coffee growing held the most interest because it was at that stage when improvements and support for growers were most important.  As one latent advertising slogan put it, “a good cup of coffee starts with good coffee beans, and good beans come from…”  It all starts with the beans that become plant seedlings.  Laymen can’t generally tell one coffee bean from another, but coffee growers know, buyers know, and connoisseurs of coffee unwittingly know.

By way of anecdote, the Footloose Forester believes that growers don’t have much to say about fresh coffee grounds in a can or package in a market, but they are keen observers when the green beans begin to turn bright red and ready for harvest. Picking coffee beans as relatively mature cherries is not much different than picking real cherries.  They wait until the proper time so that the flavor is locked in.  Regardless of whether the cherries are harvested by the farmers themselves or by contract pickers, the next stage is the further maturation of the beans in coffee washing stations. 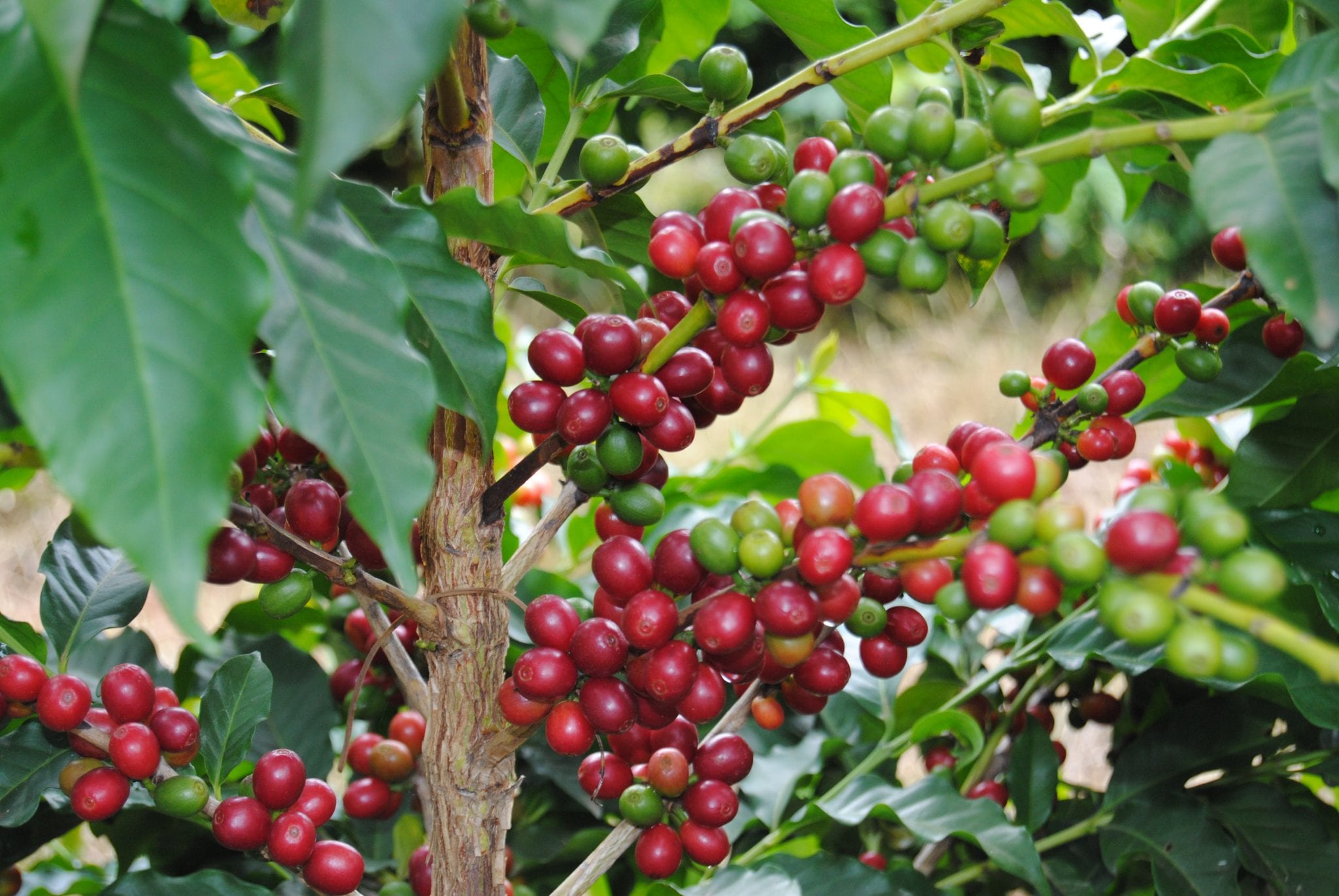 Coffee cherries are picked when they are ready

Coffee washing in specially constructed washing stations is institutionalized in some places, such is the value placed on the eventual commodity of salable coffee beans on the world market.  At this stage, an ancient anecdote from the memory banks of the Footloose Forester comes to the fore.  When doing an environmental monitoring study tour in Ethiopia in 1993, three of us USAID observers from Kenya stopped in at a coffee washing station that was going full tilt.  The friendly foreman of the group insisted that each of us drive away with two kilos of washed and dried coffee beans.  Six kilos of beans was a very big chunk of his inventory, but he insisted that we accept the coffee beans as a gift.  He may have also reminded us that coffee as a species of plant originated in Ethiopia.  Fast forward some 2-3 months, when the Bengal Tiger, wife of the Footloose Forester, roasted the Ethiopian coffee beans in a shallow pan in her kitchen.  We subsequently ground the beans for brewing and, of course, made coffee in a pot.  Ouch!  It was the most vile tasting coffee we had ever sipped.  There may be worse, but we never had that misfortune.

There are good reasons why there are professional coffee tasters sojourning here and there in coffee-growing regions of the world.  Juan Valdez may be the most famous fictional character, but tasting before buying is a part of the game.  In the humble opinion of the Footloose Forester, both local growers and commercial producers of “industrial crops” such as coffee and tea have a big stake in keeping the markets happy with superior commodities.  He also believes that producers sell their very best abroad, and keep the mediocre at home.  At least, that is what his taste buds told him regarding locally produced coffee, tea, and even tobacco products.  Not all coffee tastes the same; not all tea tastes the same, and not all cigarettes smell the same.

In the next installment of this draft chronicle, a few more anecdotes come to mind about coffee processing, marketing, and preparation in your personal coffee maker.  The Footloose Forester will seek to be kind to Starbucks and the mystique of the coffee klatch.

Before he was prepared to complete the next section of this draft, a reader inquired about the cherries and the berries.  It is somewhat self-evident what the cherries are about, but the berries do need more explaining.  In the interim, his weirdo alter ego (Meeza bin Spoofin) and Nom de Plume of the Footloose Forester interjected with the information for the reader. Meeza bin Spoofin wrote,

My preferred way to create chronicles is to do a draft in WORD first, and put it on my blog site at LegacyStories, before sharing it. The topic of coffee is complex enough that I had to stimulate myself to push for the full Monty. The hoped-for catchy title is a signal that Meeza know a teeny bit about coffee plants in the ground; dem ripenin' fruits on da bush that is reddy for pickin when dey is red like cherries, goes to de coffee washin stations that can be spotted from the road; dem cherries brown up on dryin tables like black berries, get stuffed into bags to go into storage, wait for de coffee buyers to show up for purchase bids; prepare air and sea shipments to de big guys in cold countries....and...and...and you see the point. Coffee in de cup might be a year or two later. A lot to cover, in the meantime, hold my coffee.