Every once in a while, the Footloose Forester (and everybody else) shows disappointment that something important that should have been recognized was not, something that should have been heard was not, or something that you wanted people to see was not seen.  With the proliferation of dumb memes and low-bar click-bait puzzles and search games on social media sites of the Internet, both the lumpers and the splitters among those seeking answers will be magnified.

Being recognized in a court of law may mean being acknowledged as a witness, or being recognized in a meeting means being acknowledged as a participant and potential speaker, but those gestures are similar acts of active and verbal intercourse. Not recognizing what was said and meant in court or in that meeting, however; was the absence of acknowledgment of something that is germane to the issues at hand.  Those situations are opposite sides of the same coin but, but once again the settings are examples of situations with active verbal intercourse between the speaker of the message (the sender) and the recipient of the message (the receiver).  Although it may not have been pointed out at the time, the receiver of the messages was not being a good observer.  People who pay full attention usually make good observers and people who do not pay close attention usually are not good observers.  Call it an acquired habit or a life-long personality trait, but being a good observer is an asset in better understanding what is around us.

The impetus for this little essay is a mental scene that remained in the mind of the Footloose Forester for many decades.  It also had something to do with paying attention and with being a good observer of that flashing scene along Route 66 in Texas in 1961.  No, it was not important but it was rather unique.

As a car loaded with 5 college students sped through open-range land in West Texas, the Footloose Forester was unexpectedly surprised to see a branding operation going on not far from the edge of the road.  He piped up with some enthusiasm in his voice at what he was witnessing. Everyone in the car might have turned their heads to see real cowboys in cowboy hats squatting over a smoking fire and applying a hot branding iron to an immobilized steer.  Yes, one passenger in the car was sleeping soundly, and one or two had been nodding off.  The driver and Footloose Forester were fully awake and one other came awake at the excited voice of the Footloose Forester but only the Footloose Forester took it in for what it was.  Modern-day cowboys on open range in Texas, engaged in branding cattle in broad daylight along Route 66.  You just can’t make this stuff up.

Needless to say, there was no point in asking the driver who was probably doing 75 mph or more to slow down or turn around; needless to expect the dozing and sleepy passengers to awaken their imaginations to appreciate what was going on; and needless to try and explain that we as individuals or as a group may never again see such an iconic scene straight out of TV western movies.  The time and the place passed us by as we passed it by. 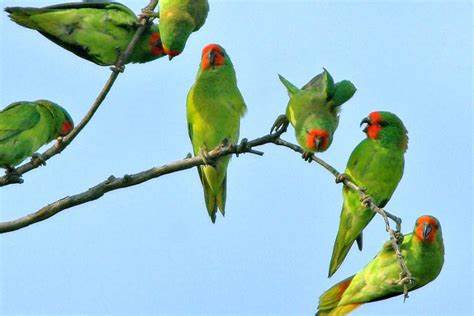 The gifts of many warm memories that the Footloose Forester cherishes have often been associated with his trying to be a good observer. Perhaps people will think that he exaggerated when he put a story in his first book of memoirs about passing through a migration of 3,379,000 sea snakes off the western coast of Java; perhaps they will think that the flock of about 250,000 snow geese that he saw in Maryland could not have been that large; perhaps they think that he just made up a story of seeing 50,000 parrots and parakeets roosting in a teak plantation in Trinidad.  He sought out finding the wonders in nature in many places, and he unabashedly states that he demanded of himself a trust in his observations.

There were other sightings that stick in his memory banks.  Over 50 turkeys flying overhead, in a single flight near Uniontown, Pennsylvania; the 55 African Elephants he saw passing through an open field in Kenya, the tight group of 5 young fawns of a few years ago, near his home in Virginia, the 14 crocodiles waiting patiently for transiting ungulates in the muddy waters of the Mara River in the Maasai-Mara region of southern Kenya or the half-million pink flamingos that inhabit Lake Nakuru in Northern Kenya.  Let others decide whether or not the Footloose Forester made all that stuff up, or whether or not he is a good observer who takes the time to count, to measure, to record, and to report.