Everyday Science and Math, for a Forester

High school math and science courses are required for admission into forestry schools around the country.  At some stage of their careers, most field foresters will have in their hands various instruments that measure tree height, diameter, elevation, and/or distance. The baseline academic subjects that lead into the workings of Abney levels, hypsometers, diameter tapes, dumpy levels, and foresters’ chains are found in the algebra, plane geometry, and trigonometry one is expected to learn in high school.  As a practicing tropical forester in later years, the Footloose Forester also had to work with metric units and equivalents.

In some cases, if there were no measurement instruments scribed with scales in the System International (the metric system), it required that equivalent scales be developed. There were plenty of challenges, especially in Third World Countries.  In those days there were no metric unit measuring devices that were readily available.  The Spiegel Relaskop had been developed in Europe in 1955,  but the Footloose Forester had only ever seen one of them, so they were as scarce as hens' teeth.

Converting tree height from feet, as measured with an English System Abney level or hypsometer, into meters was usually done after the fact by converting the recorded measurements (in feet) to the equivalent measurements in metric system equivalents.  The importance of keeping the data in a notebook was fundamental.

When it came to measuring the diameter of trees, the same problem existed if the recipients of reports were interested in having the data in metric units.  In those years, diameter tapes (D-tapes) were scribed in English units only, at least that is the recollection of the Footloose Forester. Thus, in practice, one took diameter measurements, scribed on the tapes in pi (π) inches, and converted them into metric units at a later time.  Notebook required!  But… but in tropical high forests where the trees were sometimes too wide to accommodate the length limitations of the standard D-tape, there were only two ways to measure the diameter--fabricate a D-tape with rope or cord, or to use a standard 100-foot measuring tape and calculate inches or centimeters. The same problem existed in the redwoods of California.

Another handy device used by foresters to measure both diameter and tree height is known as a Biltmore Stick.  A sturdy measuring stick that is scribed to read diameter directly is burned into the wood on one side.  The gradations on the stick are derived by their relationship with the tangent of the angle from the observer’s eye and the length of the observer’s reach. It was a tricky proposition. In the commercial production of Biltmore Sticks, a standard reach of 26” (?) was assumed.

Tree height, usually expressed in 16-foot logs of height, is scribed on another side of the Biltmore Sticks.  The problem was, Biltmore Sticks were designed and scribed in English measurement units, thus if a forester chose to use one in The Third World, he/she would have to convert all the readings into centimeters and meters, respectively.  At last reading, all the countries of the world, except the USA and one other, use the metric system.  The logical solution would be to manufacture a Biltmore Stick in metric units.  Presumably, they now exist but at the time when the Footloose Forester was well into his career as a tropical forester, he did not have that accommodation. So, he made his own metric Biltmore Stick.  More science and math went into scribing accurate markings on the sticks he used.

Along about 1974 or 1975, he held a class exercise at Cook College, Rutgers University in which his forestry students were required to make their own metric Biltmore Sticks.  Science marches on.  Tree diameter estimates in centimeters, log height in meters, and maybe a simple linear measurement ruler in centimeters on the other face of the 3-face Biltmore Stick.

The related problem of measuring distances in meters when pacing along a transect required the Footloose Forester to construct a lightweight but strong walking stick that could be used to determine cumulative distance when the slopes were too steep to rely on his normal pace.  The length of the stick was going to be hypothenuse (c) of the right triangle whose height (a) was the distance from the ground to his shoulder, and the measured distance on the ground (b) was going to be the base of the triangle.  By holding the stick out from his shoulder (a), the spot on the ground where the tip of the stick came to rest was the base of the triangle and the linear distance on the ground.   The image of a Right Triangle was the inspiration for the real-world solution. 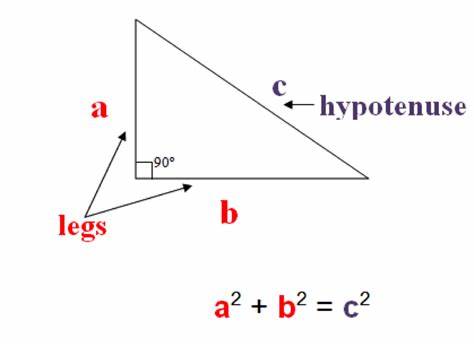 When he needed to know the distance (b) and he could readily measure the height (a), it was necessary to calculate the hypothenuse (c) using the Protagorean Theorem:  C2 = a2 + b2.  At this stage, the fonts in this chronicle need a little massaging.

Knowing the linear distance along a fixed compass bearing was not limited to slopes. At a point where the Footloose Forester was looking straight into a large stand of dense bamboo, and astride a shallow stream to the left and a steep bank to the right, he knew that the only way to continue on the compass line was through the bamboo thicket.  It was not possible to walk upright or in a straight line.  The only solution was to align his measuring stick on the compass line and jam it into the bamboo thicket while he crawled through.  He counted how many times he thrust his measuring stick forward, from the front tip to the end which he held in his hand, being careful to note the beginning and ending places along the line, while also refocusing on the compass bearing as needed.  Never once while crawling through the bamboo thicket did his feet touch the ground.  You just can't make this stuff up!  The Footloose Forester does not remember whether the distance crawled was 40 meters or 60 meters, but he will never forget that episode and adventure in tropical forestry.