It’s Raining in the Teak

The combination and progression of adventures that led to dreams that led to stories that sometimes led to essays is the present impetus to now tell a tale that not many people will believe.  It is all about a wooden cabin that creaked and cracked so loudly that it was not possible to sleep beyond about 05:30 in the morning.  Besides, the 50,000 or so parrots and parakeets nesting in the teak plantation nearby began to twitter and screech so loudly that they created a frightful din.  And about that time of day is when it started to rain in the teak as the sun warmed the forest canopy.

Serendipity is one of the favorite words of the Footloose Forester because it has been such a welcomed traveling companion.  It was the triple Wham-O serendipity of hearing the wooden cabin beginning to creak and crack after the sun set; it was the discovery of the large colony of parrots and parakeets that disclosed their location with their screeching, and it was the sound of the dewdrops falling to the ground and unto the dried leaves of the teak plantation where the bird colony lived.  The Footloose Forester first heard those things, then he saw those things.

The occasion of one man’s discoveries in the teak plantations of Trinidad started with the decision to conduct field research in four different planting coupes of the same-aged teak in Trinidad.  Unlike most any other plantation of trees to be found anywhere in the world, the planting coupes chosen were all planted with the same known provenance source of teak seed from Burma, all were thirty years old at the time, and all had well-defined soil mapping boundaries within mapped rainfall isohyets.  Serendipity in regards to minimizing the variables! 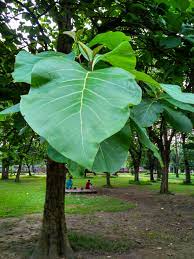 The anecdotal chronicle, however, is really about learning that the creaking and cracking of the wooden timbers of the cabin was due to shrinking and swelling on the wooden planks when it rained or were dew-laden, followed by drying out as the sun dried them out.  An estimated count of 50,000 parrots and parakeets took place only after first hearing their cacophony from the cabin and then creeping up close to get a closer look before they began to fly off.  And confirming that it was raining under the teak came only after first hearing it raining in one particular swale of trees below the cabin, each and every day that the heavy dew of the previous night coalesced in a brief release unto the dried teak leaves on the ground underneath the trees.  You just can’t make this stuff up.

Understanding what was going on was not as easy to explain as knowing what the Footloose Forester heard.  He could hear the loud cracking at the joints where the construction panels met, he could hear the groan as the cabin’s frame settled for the night.  Seeing it happen was not going to happen.  Hearing the shrill cawing of the parrots and parakeets was unmistakable because the cacophony was so loud, and identifying them in the early morning light was simple.  The Footloose Forester went back to their roosting place at various times to ascertain whether or not they stayed all day, or departed for other environs.  It turned out that they left their roosts in the morning and returned in the evening.  But verifying the phenomenon of raining only under the teak was going to take a leap of plausibility on the part of the reader.  On dry days when it did not rain, there still was dewfall because there usually was a lot of moisture in the humid air of tropical Trinidad; the large, broad leaves of the teak trees intercepted the dewfall in their canopies and discharged the dew-laden leaves where the conditions were right. Hearing it was unmistakable, and seeing it happening was another serendipity that filled the Footloose Forester with wonder.