A few memoirs are related almost exclusively to forestry ventures, and some of the very sweetest memories are about the sights, sounds and events when Cal-Pacific Forest Consultants had a contract to conduct a land-timber valuation inventory for the US Forest Service.  We were on the job at two locations in the vicinity of the small town of Trinity Center, on the Shasta-Trinity National Forest. These days, however, the names and administrative responsibilities have been separated into the Shasta National Forest and the Trinity National Forest.  Nevertheless, the US Forest Service people wanted to exchange land with the Southern Pacific Railroad who owned legacy rights to high elevation peaks nestled within the Trinity-Shasta Alps Wilderness Area, in exchange for high-value Douglas Fir timberland south of town that was part of the National Forest.  Our job was to inventory the timber on both parcels and to put an independent valuation on the timber as a way to gauge how much land should be exchanged in a fair swap.  In retrospect over the years, our participation was an early aspect of what became The Wilderness Act; and the Trinity Alps region became part of the national wilderness system. 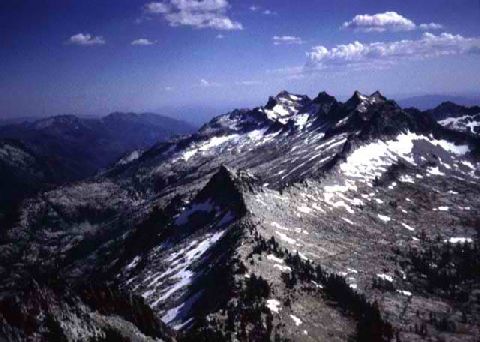 First and foremost, Footloose Forester remembers the job as the most splendid place he had ever enjoyed as a job site. It lasted about three weeks, long enough for Footloose Forester to move into a cabin that Cal-Pacific rented while we conducted the inventory. The residency was one of the 26 moves he made while working as a forest consultant, but since he was single with no permanent residence, moving the 300 miles to Trinity Center from his last job assignment was a practical thing to do.  Years later when a few people inquired where he had lived in California, he could half-seriously tell them that one place was Kickapoo Falls, California because that tiny waterfalls was on the map and was nearer to his cabin than was Trinity Center.   Upon checking with an updated Google map of the area, it sparked a recollection that the place where he stayed was the Coffee Creek Ranch.

A powerful memory about learning forestry on the job came out of his cruising experience on the Trinity-Shasta. He worked alone, as did other one-man cruiser teams on the job. Once he was instructed where to go and what the objectives were, he proceeded with the inventory, first in the lower slopes of mixed-forest species in the proposed wilderness area of the Trinity Alps region, then in the high value, nearly pure stands of Douglas Fir (Pseudotsuga menziesii) on the alluvial flats of volcanic soil adjacent to the Trinity River. Big differences in stand structure between the rocky uplands and the deep soils of the alluvial flats involved such things as form factor (taper), site index and the number of merchantable logs in trees of the same diameter.  For Footloose Forester it was a lasting learning experience, and at the time an embarrassing one, as well.   He was called out for consistently under-estimating the log heights of Doug Fir in the alluvial stands.  This is one story he had to tell.

As a cruiser and estimator of tree diameter and tree height, he was usually acknowledged by others as being above average.  Those skills are acquired by using measurement instruments and then, only when you are satisfied that you are within the guidelines of accuracy; you employ the speedier technique of estimating by eyeballing.  All cruisers eyeball, and are expected to have eyeball skills and then use them much of the time. A big mistake that Footloose Forester made was not believing his eyes in the volcanic soil stands along the Trinity River.  Footloose Forester thus learned a lesson that he never forgot.

In the stony uplands, trees that had a diameter of 14 inches, measured at 4½ feet above the ground (breast height or dbh) typically contained two merchantable logs of 16 foot length.  At least that was the case for Doug Fir and that was what the log tables said.  The book tabular value choices were 14-1 or 14-2, meaning the officially recognized tables put 14 inch dbh trees at either one 16 foot log or, at best, two logs.  Then Footloose Forester went cruising in the deep volcanic soils of the flatlands.

His boss came by one day and complained that he was underestimating the actual height of trees, and consequently underestimating the number of logs in them; and thus, by implication, underestimating the value of the stands, themselves. He had a point.  And the visual proof was the crux of the learning experience.  A day or two later, the boss and another seasoned forester came by with cruising sheets that had been submitted by Footloose Forester.  They also had a chain saw.  Choosing a cruise plot that was convenient, the boss selected a tree that he wanted to check for accuracy.  “OK, he said, ‘here is a 15 incher that you listed as 15-3.  Let’s see what we get.”  They cut the tree down and measured it with a 100 foot tape.  It was 15” in dbh but was more than 5 logs in height.  In fact, we all remember that it had fully 5½ logs of merchantable timber, measured to a top diameter of at least 10” inside the bark.  So the Footloose Forester had indeed not believed what his eyes were telling him about how tall these healthy second-growth Doug Fir stands were, but then compounded the error by putting gross underestimates on his cruise sheets.  On the other hand, the boss had his problems with the US Forest Service that wanted to know how some data sheets showed such large discrepancies in merchantable height. Of course, the books that we all used didn’t help out with the information.  Nowhere was there a log table showing Doug Fir of 15-5, or even 15-4.  Most school-trained foresters probably take it on faith that a 15 inch dbh Doug Fir contains, at most, three merchantable logs.

Over Time, Even The Facts Change