Another dream, another chronicle about those bits and pieces of reverie that bob up and down in the soup of memories.  The first ingredient in the soup of last night’s dream was the vision of a freshly graded section of a country road in Burundi.  More than two decades after seeing a freshly shaved road surface that exposed large chunks of crystal-clear rocks, the Footloose Forester still regrets not asking the USAID driver to stop so that he could collect a few specimens for his rock garden.  He had no illusions about those chunks of crystal possibly being diamond, but he let an opportunity go by to add something quite novel to his modest collection of rocks from around the world.  The Footloose Forester had already collected several large specimens of vermiculite from another road cut in nearby Rwanda and he had an idea that various landforms often contributed unusual rocks and minerals that were part of the structural shaping of those landforms, themselves.  Looking back, he believes that other landforms in other places hold geological anomalies that have signature features that have attracted miners and quarry operators over the years.

Africa has its share of unusual landforms and the Footloose Forester took advantage of the opportunity to collect specimens when he was On the road…again!!!  In addition to the thick books of vermiculate from Rwanda and the chance to add chunks of crystal-clear rocks from Burundi, he did not miss out on amassing 40-50 pounds of jet-black obsidian rock from the shores of Lake Naivasha in Kenya. There were plenty of black boulders sitting on the shoulders of the road overlooking Lake Naivasha that had been excavated with some commercial purpose in mind, thus it was a sure thing that there would be shards and chips of obsidian lying around.  Besides, the speculating Footloose Forester believed that they were extracted from a nearby hill whose steep flanks and rugged ground surfaces were a result of a huge bubble of volcanic extrusion.  Such an idea was not merely fanciful, that region of Africa was directly on the interface of the Great Rift Valley.  In that magical place, geology came to life and serendipitous discoveries might be found anywhere.  Needless to say, there is plenty of obsidian in his rock garden.

On the road…again!!! in Ethiopia allowed the Footloose Forester to be an accidental rock hound inside the calderas of extinct volcanos in more than one place.  During one field study tour that was arranged by the sponsors of a soil science conference, a whole busload of participants got the opportunity to swim in the grey colored water of the lake that had formed inside the caldera.  We were advised to not let water get into our mouths, so rather than swim, the adventurous ones waded out up to our necks but were rewarded in seeing an occasional pumice boulder float by. The next thought was to seek a few pumice boulders on shore, to add to the rock collection.  That was easier to do along the shoreline and the Footloose Forester was successful in getting a few specimens to put into his suitcase.  On the next trip to Ethiopia when official duties put him in the vicinity of another pumice-laden volcanic lake, the Footloose Forester scored at least a dozen sizable pumice boulders but, alas, they were discovered by a Customs inspector upon departure and never left the country. 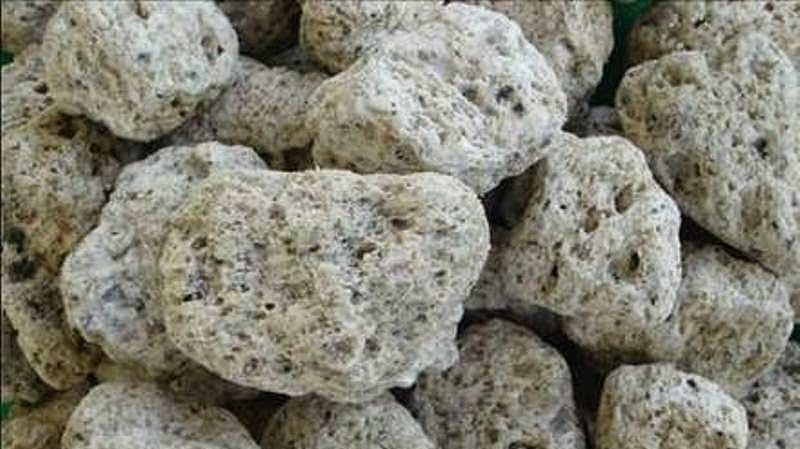 Seeking rocks and mineral specimens in situ was part of an ongoing adventurous quest and Africa was an exciting hunting ground. The Footloose Forester and his occasional traveling companion in the person of the Bengal Tiger collected shards of ruby and amethyst at the mouth of a ruby mine in Kenya, bits of mining slag near gold mines in South Africa, and searched the grounds in the mineral-rich country of Madagascar. Most often, however; the Footloose Forester did his rockhounding alone.  Alas, putting labels on everything never happened and some of the provenances of our rock garden are uncertain.  One or two regrets stand out.  A sizable specimen of unweathered volcanic rock that the Footloose Forester spotted in a cultivated field in Comoros attracted his attention because rocks of any description were rare in the location; thus when he went to pick it up he realized that it was possible to whittle it away to sand by merely abrading it with his fingernails. That specimen was too big for his suitcase, but he did find a smaller one nearby and collected it for subsequent inclusion in his rock garden.  Because the high moisture content of the in-situ boulders in the cultivated fields hastened their reduction to soil-sized particles through weathering, there were not many boulders lying around.  If he is correct, that same weathering process caused the slow but steady reduction of the specimen in his rock garden to the point that it disintegrated beyond recognition of its original identity.  The same thing happened to the pumice specimens that he collected in Ethiopia. Seasonal freezing and thawing in Pennsylvania winters contributed to fracturing and breaking apart some other specimens as well.  Over a number of years, the Footloose Forester watched as a beautifully banded shale stone from Haiti exhibited inexorable separation of the layers, as it lay there in his rock garden.

In looking back via the venue of dreams, the Footloose Forester acknowledges that even photographs of unique rock formations, soil profiles, and specimens of minerals have stirred his imagination to the point of committing some photographs to everlasting memories that worked their way into dreams. One of his favorite college textbooks was a geology text that was rich in photo examples of landforms, mineral deposits, and even soil profiles.  The term “varved clay” was so intriguing that he never gave up the quest to see a varved clay in the field.  Many years later, he finally saw a magnificent varved clay in profile at a steep road cut in Haiti.  No photo, unfortunately; but a memory that along the south coast of Haiti is a landform that is quite unique, thanks to the exposure of its structure at a road cut.  Steep road cuts in other parts of the world have been instrumental in exposing the geological history, in some cases. A steep road cut in Costa Rica exhibits layers of volcanic ash deposition from Volcán Irazu at a depth that shows the subsequent development of soils above it.  Volcanologists and Soil Scientists around the world look for such evidence.

A recent dream was the catalyst for the drafting of this chronicle but, like many other chronicles, it is subject to updating with additions.  The rock hound collection activities of the Footloose Forester might surely mention the serendipities of his explorations in and around the terminal moraines of the Wisconsin Glacier.  He grew up in Netcong, New Jersey which is situated astride the long band of the terminal moraine and he knows just where to collect more samples of granite, sandstone, gneiss, conglomerate, limestone, and shale.

I am very enjoyed for this blog. Its an informative topic. It help me very much to solve some problems. Its opportunity are so fantastic and working style so speedy FOR MORE DETAILS.

I am very enjoyed for this blog. Its an informative topic. It help me very much to solve some problems. Its opportunity are so fantastic and working style so speedy [url=https://mynewsfit.com/how-to-bench-test-a-chainsaw-coil/]FOR MORE DETAILS[/url].
Cancel Update Comment
Follow