Folks who are landscaping their homes may feel a need to order a truckload of topsoil to level the land or to improve the fertility of the surface soil.  So, they telephone in an order of topsoil from the local nursery or supplier and await the delivery which is deferentially dumped at the place where they designate.  Or in the driveway, for lack of a better location that is convenient for the hauler.  The price the landowner pays is usually based on the volume requested.  Except that the terminology used in the transaction is for so many yards of soil (in the United States).  Of course, the transaction unit in the purchase, a yard of topsoil, for example, is an oxymoronic use of a volume measure sold as a linear measure.  Discussing how much topsoil is needed is literally a consideration of how much volume is required, whereas the pricing is based on how many yards of topsoil will be sold.  Does it really matter that a volume measure is generally discussed as a linear measure?  It should matter because all the stakeholders in the transactions have pricing structures to deal with.

Honest brokers and those with large bins that measure 3 feet long, 3 feet wide, and are 3 feet deep (and multiples thereof) can be said to offer a full yard of topsoil.  An outdoor storage bin that is 3’ X 2’ X 3’ does not have the capacity to accept a full “yard” of topsoil.  Although a pick-up truck with typical bed dimensions of 4’ X 8’ and loaded to a height of only a foot is more than a full “yard”, hardly anybody checks the volume.  Honesty should be paramount, but often it is not.  It would be easy enough to say that the load contains 32 cubic feet of topsoil, but loaders, haulers, and landscapers typically refer to yards of topsoil and may forgo discussing details. The inaccuracies arise when the order is for more than a yard and the owner of the truck is concerned about a weight limit.  The Footloose Forester is merely speculating here.

The Chronicles of a Footloose Forester have long been either Essays, Stories, Adventures, Dreams; or some combination of them.  This one may be mostly essay, but there are stories that also go into the mix.  One has to do with a conversation or two about the units of measurement of firewood.  The pricing structure of firewood had, until recent decades, been based on cords of stacked wood.

A cord stacked on the ground (often near the place it was cut) measures 4 feet wide, 8 feet long, and 4 feet high.  In his youth when he did some of the felling, cutting into bolts, and stacking them into cords, the Footloose Forester was aware that our selling price of $60 a cord was low, as compared to fair market value.  We forestry students did not pretend to be selling seasoned hardwood, but the low price attracted enough potential buyers in the area to make the woodlot cleaning and harvesting operations a logical management objective. The woodlot was part of the College of Agriculture campus at Rutgers and we had the blessings of the Forestry Department to conduct the thinning and sales of firewood.

The dimensions in a cord added up to 128 cubic feet of wood, the volume of a standard cord.  That much firewood is not too common outside of rural states where wood is still burned for heating homes.  The stories that evolve have to do with legitimate dimensions and the pricing structure associated with firewood.  On more than one occasion, when Footloose Forester asked about the cost of a cord of firewood, the answers were always about something other than a standard cord.  Most dealers priced their wares as “face cords” which may or may not appear in textbooks of forestry terminology.  What they were selling was 1/3 of a cord, or one face of three ranks or ricks of stacked logs. 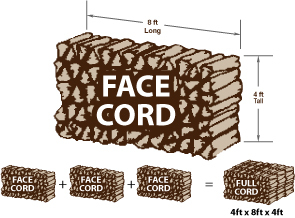 More than one prominent photo found on the Internet depicts a face cord as being ½ cord.  Prices and concepts change over time, but in his memory, the Footloose Forester recalls a face cord selling for $60 at one point in time and $120, in later years.  Needless to say, nobody bothered to call a face cord a rick.  And nobody was going to count the number of logs in a rick or a face cord.   These days, of course, one can buy bundles of firewood at Home Depot or Lowe’s for prices that range from $2.50 to $5.00 a bundle.  Don’t ask how many bundles it would take to make up a face cord, or a standard cord.

The decision to use the title of this chronicle Ricks, Face Cords, and Yards of Topsoil, but starting with the more familiar scenario of topsoil use was intended to pose in the reader a puzzling interest in the subject matter, yet to hold enough curiosity about the other, less familiar topics.  To be sure, there are other areas in the daily lives of buyers and sellers of commodities that bring hesitant questioning about product dimensions and their true valuation.

On Perceptiveness
Geographic Coordinates With Pictures To Match