The Lumpers and the Splitters of the world are often miles apart when it comes to perceiving things around them.  Methinks that they may also act in different ways.  Our individual ways of thinking about things and acting on what we see, in some ways, shape who we are as people in the crowd.

As usual, the inspiration to begin a new chronicle was triggered by a vivid experience.  An aborted discussion about the perceived maintenance status and sanitary conditions of a guest bedroom in the Pennsylvania home of the Footloose Forester was at the heart of only one aspect of the subject of keeping the house in an acceptable condition of livability.  But before he discusses the major gripes he is harboring about that house and its neglected status; the Footloose Forester prefers to muse about how his wonderful Mother-in-Law handled a situation; and how her perception of the problem had a happy conclusion.  Maybe he will delay his negativity about the Pennsylvania situation until the next chronicle.

My modest and reserved Mother-in-Law (Tiger Dao) had purchased a beautiful, delicate vase in Viet Nam and hand-carried it to the airplane that flew her back home to Hawaii and to our apartment in Honolulu.  She carried it all the way to its intended display position on a low table in the corner of the room, next to a sliding glass door.  The delicate vase seemed to be crafted of many parallel strips into a glazed ceramic masterpiece with numerous diamond-shaped holes between the parallel strips that went completely around its shapely form.  Everyone admired its workmanship. 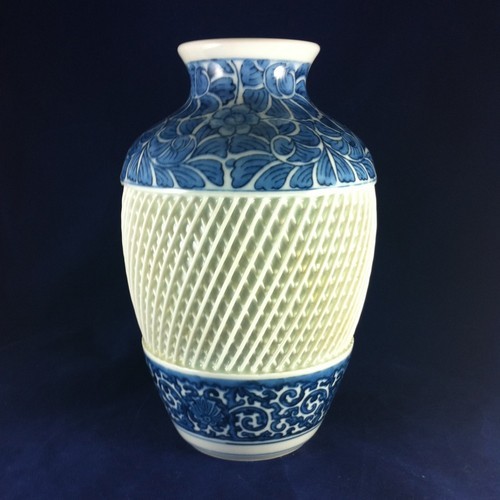 Tiger Dao hand-carried to home, a vase of similar design

When the Footloose Forester returned home from the university lab on a hot night and went directly to the sliding glass door to let in a fresh breeze, that strong breeze immediately billowed the full-length curtain and ensnarled that vase, sending it crashing to the floor.  The Footloose Forester was stunned and speechless but Mom, without a word started to pick up the pieces.  By the next day, all of those pieces had been glued back together and re-attached to whence they had been in the lattice-designed vase.

What point was being made at the time, back in 1970?  My Mother-in-Law perceived that the vase lay shattered into pieces; she also perceived that rather than toss those pieces into a trash can, she thought that she could and would glue those pieces back together.  And she did, without complaint or commentary.  She perceived that the effort was worth the time and effort. The Footloose Forester knew that he was among people with resolve and steadfast determination.  He was also blessed with a lady who never, ever said a negative word against him.

Whiskey, Leave the Bottle!
Ricks, Face-Cords, and Yards of Topsoil